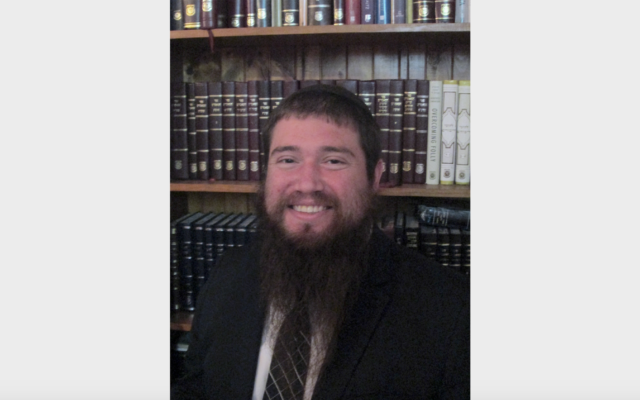 The Jewish Association on Aging has hired Rabbi Dovid Small to serve as its new director of pastoral care following the retirement of Rabbi Eli Seidman.

Small has worked the last eight years as a special education teacher at Yeshiva Schools of Pittsburgh. He also served as hospital chaplain at UPMC Presbyterian and Montefiore Hospitals, where he provided pastoral and spiritual care, for the past two years.

The Pittsburgh native graduated from Yeshiva Schools in 2000 and received his rabbinic ordination in 2005 at the Yeshivas Ateres Menachem in Ottawa, Canada. In 2007, Small moved to Melbourne, Australia, with his wife, Miriam Simcha, and completed his post-rabbinic studies at Kollel Menachem. He spent five years in the country, teaching and working as a full-time rabbi at a Jewish nursing home in Victoria, Australia.

Small is member of the Chabad-Lubavitch movement but is looking forward to serving the entire JAA population.

“I really identify myself as Jewish and want to work with everyone, not only Jews, but everyone within the community that comes in contact with this organization,” he said.

Because of his time working at the Yeshiva Schools, Small is a known figure in Pittsburgh’s Jewish community. He will now have the opportunity to serve the parents and grandparents of his former students.

“It will be really special for me to be able to provide support for the different generations within the community,” he said.

The time he spent at UPMC was significant and will inform his work with the JAA, Small said.

“It was such a special experience for me,” he said. “Being a chaplain is how I identify myself.”

It’s important to Small, he said, to be present with people, understand their needs and to help make a difference in their lives.

“What’s really unique is that you’re not only counseling but you are supporting people’s spiritual needs,” he explained. “There’s a combination of emotional and spiritual connections and support and empowering a person, which is just fascinating to me.”

One difference between his former role at the hospitals and his new position at the JAA, Small pointed out, will be his ongoing relationship with the JAA community. During his time at UPMC, he said, he would visit a patient who he might not ever see again. In his new role, there will be what he called “a continuous connection.”

In fact, Small, a father of five, already has a deep connection with one of Weinberg Village’s residents: his grandmother.

“My grandmother is a very special person to me and everyone in my family,” he said. “She really is a leader. She is so kind and gives us a sense of what it means to be noble. She’s had a wonderful experience in Weinberg Village, and I feel very happy she’s in such a good place. I very much look forward to being around her a little bit more in this new position.”

Small said one of his goals is to create an environment of support where each community member — regardless of whether they are a resident, family member of part of the JAA staff — will feel valued.

Providing for the spiritual needs of that diverse community will be paramount for the rabbi.

“If there was something I couldn’t provide — for example, if a resident was Catholic, so I wouldn’t be able to assist — I would make sure they were able to have their spiritual needs met by coordinating with a priest,” he said.

Small acknowledged that beginning his tenure as the director of pastoral care during the COVID-19 pandemic presents special challenges. He is taking special note of safety protocols and regulations and will work to find creative ways to provide support and programming for residents and the JAA’s other clientele.

While the rabbi doesn’t officially start until Monday, Oct. 12, in the meantime, he will be meeting with his predecessor, Rabbi Eli Seidman, who retired after 25 years, and getting to know his way around the various campuses and buildings.

The JAA completed an extensive search but was pleased to have been able to find a rabbi to fill the director of pastoral care position in its own back yard.

“When we met Rabbi Small, we knew he had the perfect background and interest in senior care to excel here at JAA,” said JAA’s president and CEO, Deborah Winn-Horvitz, in a prepared statement. “He has served the communities in Pittsburgh and around the world. We think he will bring his own brand of kindness and caring to our seniors and we look forward to working with him.”

Small is happy to assume a leadership role in the Pittsburgh Jewish community.

“There’s something really special about our community,” he said. “There’s a certain warmth, a certain quality of comradeship that people have together. I grew up here, so I had an understanding of it but I think when I came back to the community, it evolved even more so into a community that is really caring and united in a very special way. That’s something I feel very special to be a part of and I think many people feel that quality as well.” PJC