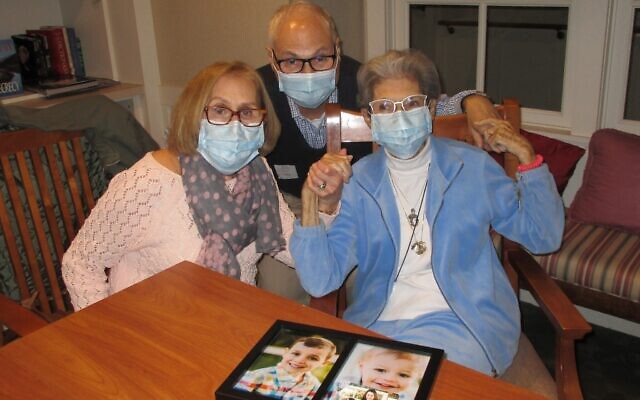 Scott and Rani Wedner reunited with Scott's mother, Eleanor, after a year of physical separation. Photo provided by JAA.

Along with their out-of-state sister Lauren Salgaller, the siblings transitioned their parents into an assisted living facility after their father, Norman, fell in January 2020, breaking a rib and puncturing his lung.

Two months later, when COVID-19 hit, their parents were safe but cut off from family and unhappy. They relocated to a different assisted living facility, contracted COVID-19 and were moved to Shadyside Hospital. During their 120 days at the hospital, Norman died, leaving a family separated by COVID protocols to mourn.

“My mom went back to the assisted living community,” Edelstein said. “With the shock of COVID, she wasn’t able to get out to go to the funeral. She wasn’t even aware that he passed away until my brother went there and sat with her. He suited up [in personal protective equipment] and told her. We all videoed with him.”

Their mother, Esther, was experiencing COVID-related cognitive and physical issues and eventually moved to Weinberg Village, a Jewish Association on Aging facility, Edelstein said. While the family was happy for the move, they remained physically separated because of the pandemic.

“We were able to do window visits,” Edelstein said. “My sister would drive in from Maryland for a half-hour window visit and drive back the same day.” Salgaller could not stay overnight with her siblings because no one had yet been vaccinated.

The family remained apart until the end of March 2021 — more than a year after their saga began — when they were all vaccinated, and Esther could join her family for a Passover Seder. The experience was emotional.

“She would go in and out of crying, but you know, kind of happy tears,” Edelstein said. “I think when you’re in isolation for all that time, you don’t let yourself feel things. And I think for the first time, she allowed herself to feel.”

Like other JAA residents and their families, Esther and her children expected the COVID-19 separation period would end a few weeks or months after it began. They weren’t prepared for being apart for so long, but credit the JAA with keeping Esther safe and helping the family feel connected. Now, family visits “are like oxygen” for Esther, who had to remain isolated much of the time last year and was unable to form friendships with other residents until everyone had been vaccinated, Amper said. 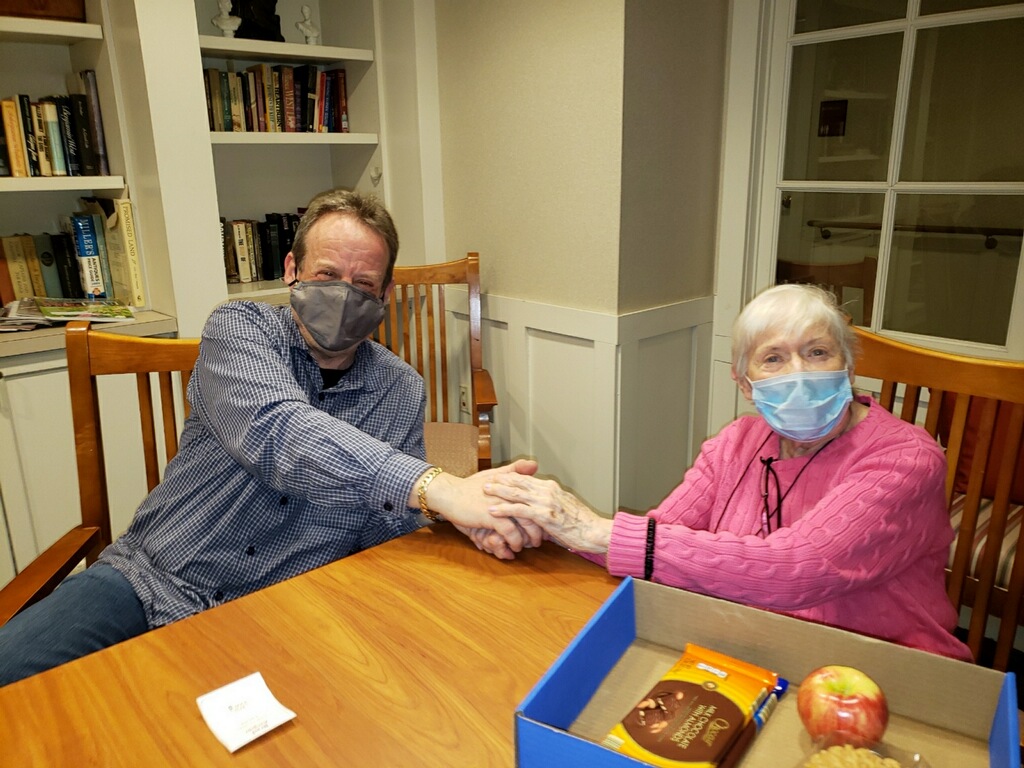 Brad Amper and his mother, Esther, recently reunited after over being separated for over a year due to COVID-19. Photo provided by Stacey Edelstein.

Likewise, when the JAA stopped visits at Weinberg Village last March, the Wedner family also thought the separation would last just a few months at most, according to Scott Wedner, whose mother Eleanor moved into that community less than a year before the coronavirus crisis.

Scott’s brother, Ronald Wedner — whose wife, Andrea, was seriously wounded during the massacre at the Tree of Life building — had been regularly visiting his mother and taking her for walks. Those visits allowed him to assess her needs and help her adapt to life at Weinberg Village, he said. Then COVID struck.

“It’s been emotional between what happened at Tree of Life, a year and half of getting through that, and then not being able to see family in many cases,” Ronald Wedner said. “It’s been a rough ride.”

Even so, “you learn to adjust,” said Eleanor.

And Eleanor adjusted well, said Scott Wedner’s wife, Randi. “She never complained. She was fine with having meals in her room. She was a real trooper.”

Eleanor doesn’t have a cell phone, so when window visits started on Mother’s Day last year, the family was grateful.

“I was here with my wife,” Ronald Wedner recalled. “We knew this was as close as we were going to get. Weinberg Village had set up FaceTime for us in the past, but this was our first chance to see her smile and her beautiful face.”

While the window visits were welcome, Ronald Wedner said, in-person visits once everyone was vaccinated were much more meaningful.

“I burst out,” he said. “I think I’m more sensitive after what happened at the Tree of Life. It’s been good. Being able to hold my mother’s hand for the first time in a year was emotional.”

The year was emotional as well for Rabbi David Small, director of pastoral care at the JAA. Because of his job, he had the luxury of doing what others couldn’t this past year: visiting his grandmother Ida, who lives at Weinberg Village, in person. Even so, her physical separation from the rest of the family has been difficult. 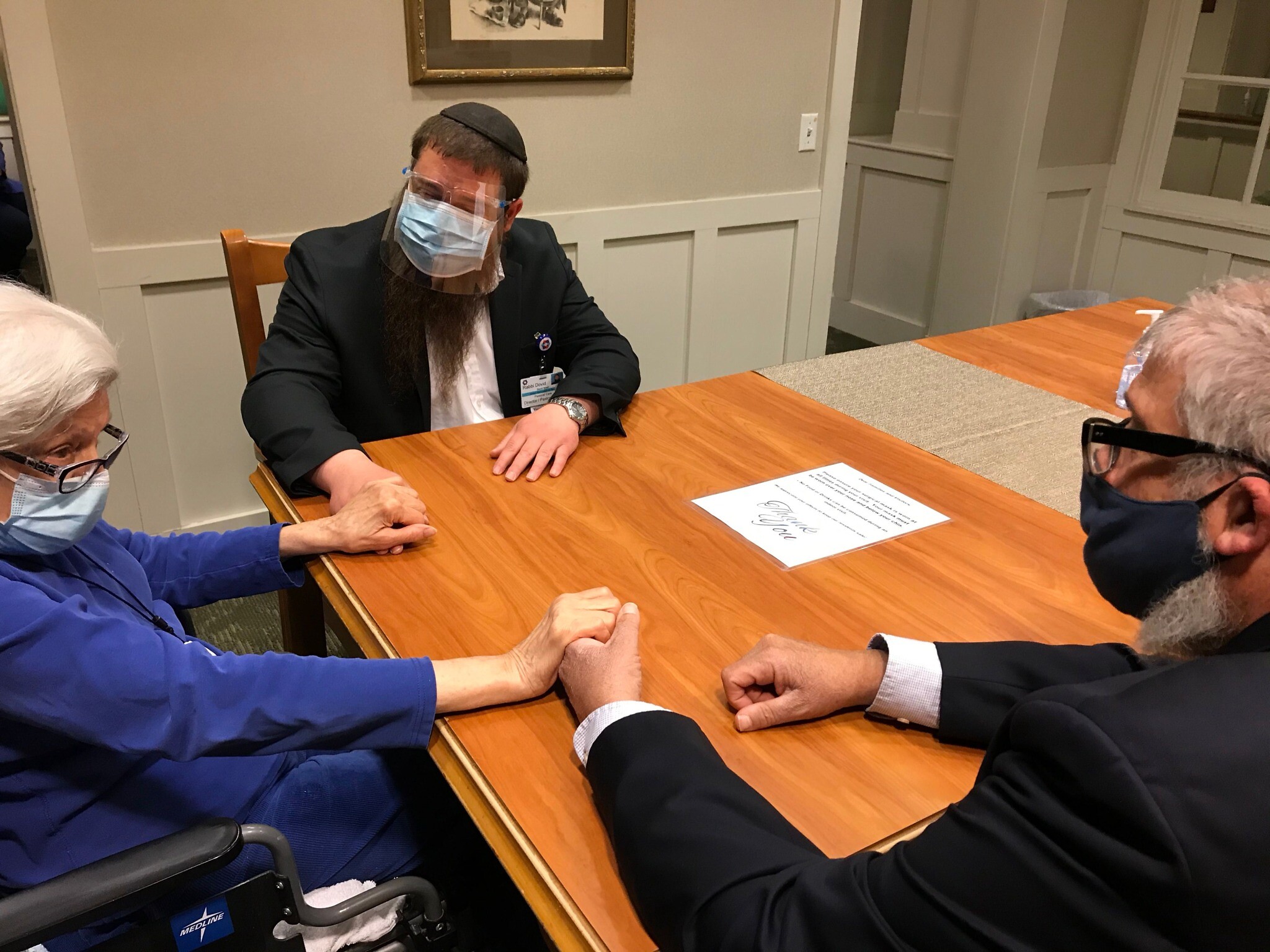 Rabbi David Small was able to see his grandmother during the pandemic because he works at the JAA. Photo provided by the JAA.

“My wife and kids still aren’t able to see her much,” Small said. “Generally speaking, throughout COVID, there has been an enormous amount of restrictions.”

Ida’s spirit has been lifted now that the COVID-19 vaccinations have allowed the family to visit more often, Small said.

“The way my father puts it, she’s upbeat,” he said. “I know once I was able to visit more, that made a real difference. She’s a family person and really misses the family. I’ve been a messenger of love for her, between my family and her.”

Deborah Winn-Horvitz, JAA’s president and CEO, is pleased residents can be reunited with their families now that vaccinations are available.

“During this very difficult year, we asked our JAA residents and their families to manage a lot of stress and anxiety without the comfort of each other’s touch,” Winn-Horvitz said. “And while we’re still keeping safety first, we’re able to celebrate these long-awaited reunions between loved ones. These moments are precious and we’re grateful they’re finally happening.”

While families can now hold hands and be close, some interactions — like hugs — are still not permitted. For the Wedners and other JAA families, they’ll take what they can get for now.

“We have the same philosophy now that we had before whenever we weren’t allowed in the building, and that is whatever is best for the safety of the residents,” Scott Wedner said.

For Edelstein, the last year made her more grateful for things she previously took for granted, she said.

“The luxury that I had having both of my parents alive, the ability to go see them anytime I wanted, the freedom we all had to go anywhere and feel safe — so many day-to-day things that were taken away from us for over a year makes me really appreciate those things now even more,” she said. PJC