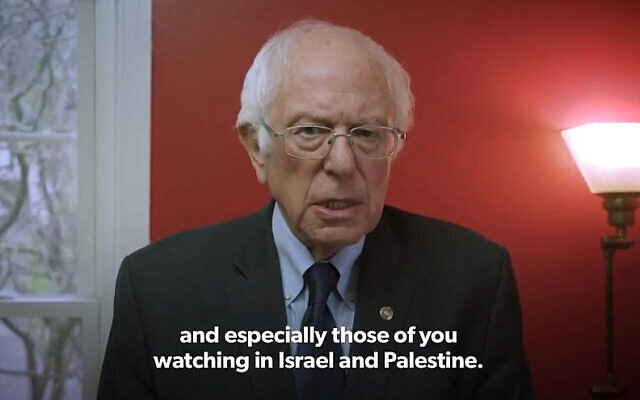 The J Street conference, held virtually this year, was a celebration of the group’s renewed influence now that Democrats hold the White House and lead both chambers of Congress. Whether the topic was Israeli-Palestinian peace negotiations or a revival of the Iran nuclear deal, the words “diplomacy,” “negotiations” and “nuance” were repeated.

More than 4,000 participants watched online. And there were greetings from an array of Democrats, including moderates like Reps. Elissa Slotkin of Michigan and Abigail Spanberger of Virginia, and party leaders Rep. Nancy Pelosi and Sen. Chuck Schumer. Linda Thomas-Greenfield, the American ambassador to the United Nations, spoke Monday evening.

As in previous years, J Street gave an open mic to politicians who mixed their support of Israel with criticism.

In his keynote address, Sanders, a 2020 presidential candidate, said the United States provides “an enormous amount of military aid” to Israel and “some humanitarian and economic aid” to the Palestinians. Restricting either of these can “bring real pressure to bear” in response to either side undermining the peace process.

“When we talk about restricting aid, it’s important to note this isn’t about singling out any one country,” Sanders said. ”It’s about acting in an even-handed way in the region and making sure that American aid works to advance American values, not undermine them.

“In terms of aid to Israel, in my view, the American people do not want to see that money being used to support policies that violate human rights and treat the Palestinian people as second-class human beings.”

Sen. Elizabeth Warren (D-Mass.) told participants that the United States needs to show Israel some “tough love.” And part of that is being critical of Israel’s treatment of Palestinians.

Warren said the United States should support the upcoming elections in Palestine and call upon the newly formed government to renounce violence. She called the current governments in the West Bank and Gaza Strip corrupt and lamented the fact that Hamas, “a terrorist organization,” would win seats.

“I get it. This one is hard, because Hamas is a terrorist organization and it’s likely going to win many seats. But the answer cannot be to stand in the way of democracy, or to reject democratic outcomes that we don’t like,” she said.

Rep. Jamie Raskin (D-Md.) compared the Israeli government of Benjamin Netanyahu to the American Republican party. He said voters need to oppose what Raskin called an “us versus them” mentality where they believe “either you’re inside our group, and you’re willing to follow what our dear leader says, or you’re not, and you’re an enemy.”

J Street, once an organization that sought bipartisan reach and managed to attract a handful of Republicans to its conferences, now makes no pretense of being anything other than in the Democratic camp. Speaker after speaker at the conference extolled the ouster of Trump and Democratic wins in Congress. The Jewish Democratic Council of America, a partisan group, hosted a session on political strategy.

The Republican Party has turned into “something like a religious cult,” said Rep. Jamie Raskin.

In 2008, Olmert came closer than any Israeli leader to reach a peace agreement with the Palestinians.

He and Palestinian President Mahmoud Abbas would had succeeded if they had a few more years, Olmert told viewers.

Olmert resigned in 2008 under a cloud of corruption and eventually served jail time. He was succeeded as prime minister by Netanyahu, a critic of Olmert’s peace moves.

Since then, the peace process has languished. Olmert said in any future negotiations, the two sides must meet as equals.

Abbas, in recorded remarks, asked the J Street audience to encourage the Biden administration to rescind a 1987 law that brands the Palestine Liberation Organization a terror group. That would be one step in restoring relations between the United States and the Palestinian Authority that ruptured during the previous U.S. administration.

He said that “dialogue and negotiations are the sole path” to a sovereign Palestinian state with East Jerusalem as its capital.

He denounced what he called the “apartheid,” “oppressive and illegal regime in occupied Palestine,” but said, “We believe in the two-state solution based on pre-June 1967 borders based on international law” with “East Jerusalem as its capital.”

“President Carter demonstrated that determined American diplomacy can end decades of conflict and bring together even the most determined foes,” J Street President Jeremy Ben-Ami wrote in the press release.