Israeli artist Meir Tati was inspired by the gallery space for his newest installation piece. Photo by Tom Little.

It started with superhero movies and comic books.

“I’m a comic book buff,” Meir Tati said, “and I like to watch movies several times, like seven or eight times. I think when you re-watch a movie you can savor all those moments you missed the first few times you watched it.”

It was during one of those repeat viewings of “The Dark Knight” series that the Israeli artist was inspired to create his newest work, “A New Tomorrow That Starts Today,” currently on view as part of the Mattress Factory’s “Factory Installed 2021.”

“There’s this big speech where Bane is standing in front of a bank and talking to the crowd,” Tati said. “I was watching it thinking, ‘This speech is completely right. I identify with every word this guy is saying.’ It stayed with me.”

It was that moment that led him to create what he called “the political mutant” for an exhibit at the Beit Uri and Rami Nehoshtan Museum in Israel.

The concept involves collages of individual politicians’ faces, combined with features from multiple, other politicians.

Tati believes we are living in a “post-ideological age,” where politicians say what people want to hear to get reelected, rather than because of any overarching political belief. This is true, he said, in both Israel and the United States.

For his installation at the Mattress Factory, Tati expanded on the ideas he originally developed for the Israeli gallery.

On the bottom floor of the museum, the artist installed more than 20 large mutant faces. Some of these are readily identifiable, others require more work. All are politicians or those who exercise some form of influence over global politics. These mutants line both sides of the narrow, stone-walled room that houses the exhibit.

At the far end of the room, a video plays on a loop. Disembodied lips read lines Tati combined that were spoken by various superheroes and villains. By removing context, the video reinforces Tati’s post-ideology theories. 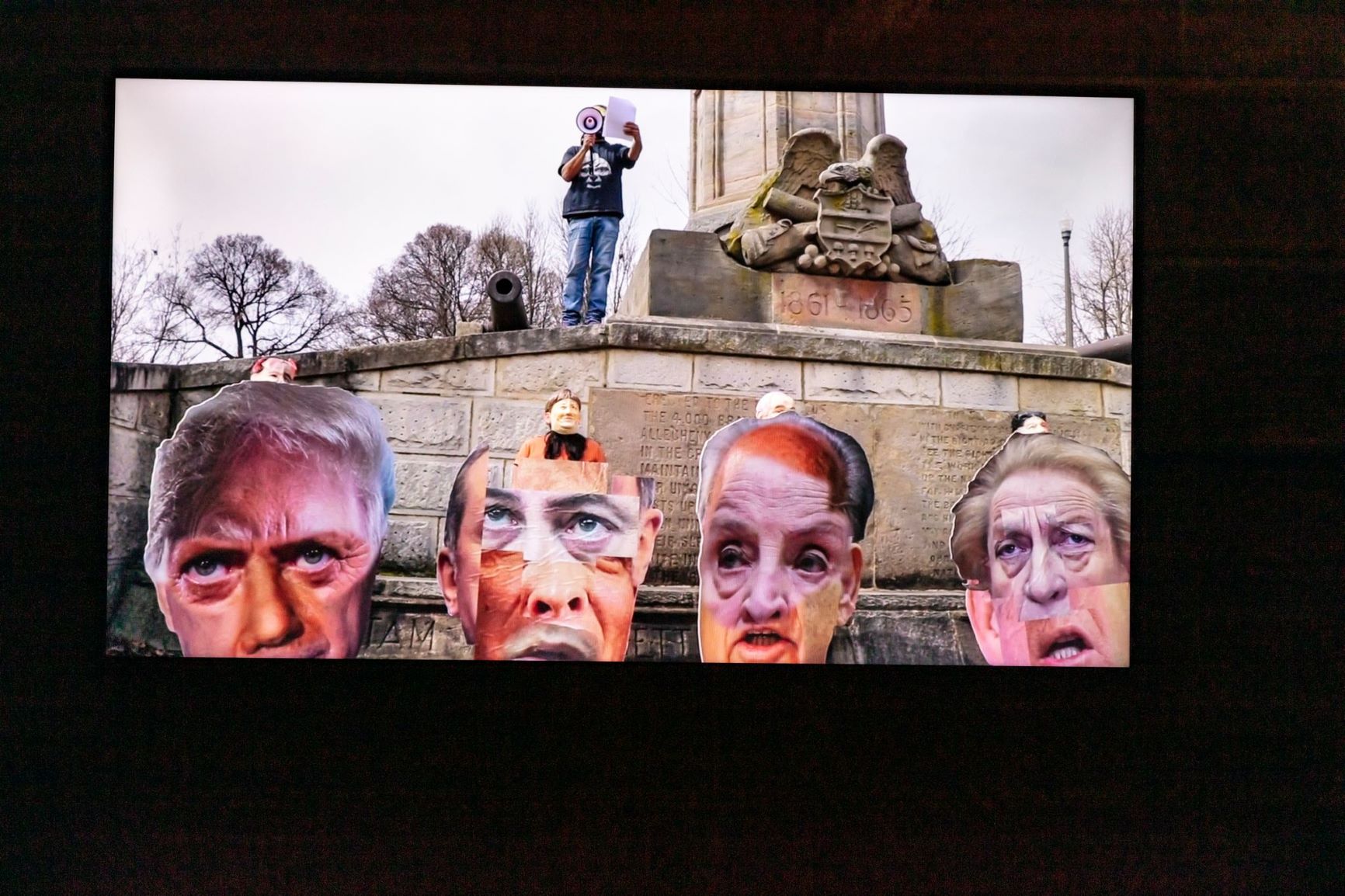 Meir Tati’s newest installation work makes use of video filmed in a park near the Mattress Factory. Photo by Tom Little.

The same speech is seen and heard three times as part of the installation. Before one enters the gallery space, it can be viewed through sign language on a monitor. It can also be heard recited by Tati in a video that features the artist and other actors, using the faces mounted on foam core as shields.

One last element of the piece features life-size masks of various politicians whose faces have been mutated and painted.
The Mattress Factory space influenced this itineration of “A New Tomorrow That Starts Today,” Tati said. He originally planned to create sculptures rather than the large faces affixed to foam core and hung on the walls. At the end of the exhibit, he wanted actors to destroy the sculptures. 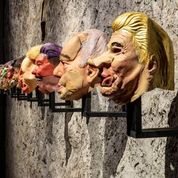 Tati created masked collages of politicians for his new exhibit at the Mattress Factory. Photo by Tom Little.

“When I saw the corridor though, I knew it wouldn’t work because this space is very special,” he said.

The gallery reminded Tati of a dungeon, horror museum or some sort of hall of fame.

“That’s why I chose to put the masks outside because it just felt right,” he said. “All the decisions happened because I saw the space and just needed to create the idea that I had.”

The exhibit falls within American pop culture, but it speaks to a larger population, Tati said.

He credits the Mattress Factory staff’s flexibility with helping him to realize his vision.

“I could do whatever I wanted to do,” he said. “This is typical of what happens to me — I plan something and then at least 50-60% of it changes.”

“Before he got here, we talked about a totally different arrangement,” Bracken said. “There was a different plan for what was going to happen with the faces. He was like, ‘Can we add lights?’ ‘Can we do this?’” 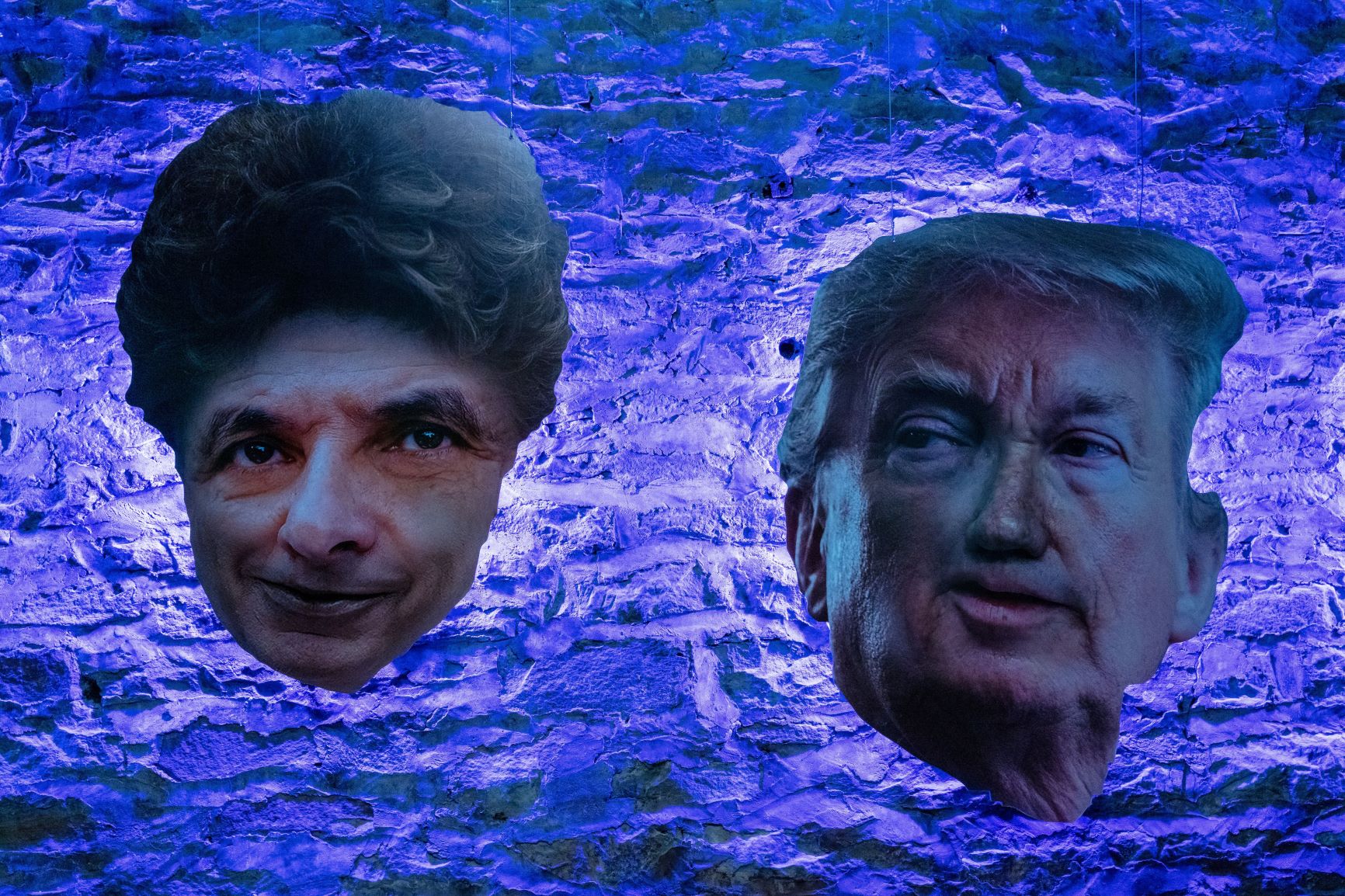 Bracken said artists often alter their plans once they see the spaces available at the Mattress Factory because what they offer is different than a typical gallery.

Hayley Haldeman, recently named executive director of the Mattress Factory after serving for more than two years in an interim role, said that “Factory Installed 2021” is the first new work at the space since the COVID-19 pandemic.

“We just opened the show three weeks ago [Tati’s exhibit opened on April 3, after the other artists], five artists, all of whom were selected in 2019,” said Haldeman, who is married to U.S. Rep. Conor Lamb.

The artists were chosen from an open call of more than 360 applicants from 41 different countries.

In addition to Tati, the exhibition features Andréa Stanislav, whose installation includes dances by John Harbist and choreographer Željko Jergan and performed by the Tamburitzans; Chicago-duo Luftwerk, whose installation “Open Square” reflects on the habitat that defines everyday experience; Thai artist Sarawut Chutiwongpeti, who created one large piece for “Utopia Station,” influenced by the United States space program; and Jeffrey Augustine Songco’s “Society of 23’s Trophy Game Room,” which considers his identity as a gay American man of Filipino ethnicity though the depiction of several different personas who are members of a fraternity.

Unlike some other galleries and museums that offer their exhibitions online, attendees must go to the museum to see these installations. Haldeman said there are strict pandemic protocols in place, including temperature checks, mask requirements, social distancing and timed tickets.

She feels that seeing the art in person is important.

“The Mattress Factory will always be about in-person experiences,” she said. “It’s an installation art museum that really tries to facilitate an immersive experience on the ground.”

Tati’s work is the first by an Israeli artist to be installed at the Mattress Factory since 2014. “Sites of Passage: Borders, Walls & Citizenship” was to feature work by both Israeli and Palestinian artists but the exhibit was cancelled after Palestinian artists Bashar Alhroub, Manal Mahamid and Mohammed Musallam withdrew from participation.

Alhroub told an Arab news source at the time that the Mattress Factory decided to exclude the Israeli artists to be in compliance with the cultural boycott against Israel, and that he and the other Palestinian artists withdrew after being accused of normalizing relations with Israel.

The independent curator of that show, however, told the Chronicle that the Israeli artists voluntarily pulled out of the show first in order to protect the Palestinians, whose livelihoods and families had been threatened on Facebook.

Barbara Luderowski, co-director of the Mattress Factory at the time, said at a public forum following the show’s cancellation that the Mattress Factory had tried to come into compliance with the terms of the boycott by correcting wording on its website, but never “solved the problem.”

Haldeman was not involved with the Mattress Factory at the time, but said the historical focus has been to open the museum to artists from around the world.

“While I can’t speak to what happened in 2014, I can say that Meir was chosen on the strength of his own pieces, as well as within that total open call, which was diverse in every sense of the word,” she said. “The works are all totally different and reflect artists from Pittsburgh, the United States and all over the world.”

Tickets for “Factory Installed 2021” can be purchased at mattress.org. PJC

David Rullo can be reached at drullo@pittsbughjewishchronicle.org