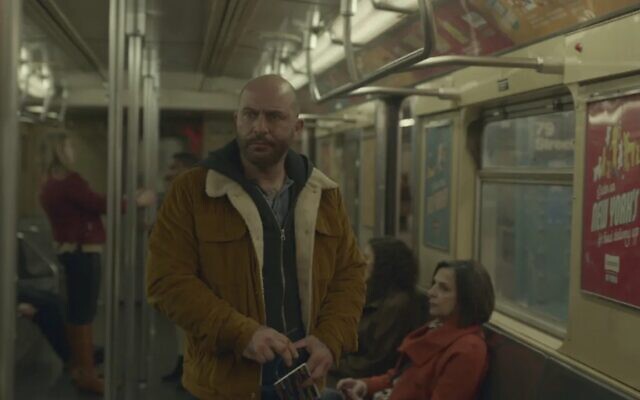 Lior Raz as Segev Azulai in "Hit & Run." (Photo provided by Netflix via J. The Jewish News of Northern California)

The newest hot Israeli series on Netflix, “Hit & Run,” is as good and as satisfying as most American TV suspense dramas, but with some Israeli accents:

The initiating accident happens in front of Loveat, a popular organic coffee shop in Tel Aviv.

The victim is a U.S.-born dancer at the renowned Batsheva Dance Company.

And her husband is a tour guide, as familiar as those who have led many of us around the Holy Land for decades.

But because this guide, Segev, is played by Lior Raz — the lead actor and co-creator of another Netflix hit, “Fauda,” as well as a co-creator of this one — we know what’s ahead: guns, brutal violence, blood, deception, glowering looks and murky moral choices as Segev becomes a one-man suicide squad.

All nine episodes of the bilingual “Hit & Run” (it’s in both English and Hebrew) became available on Netflix last week. Each is between 40 to 58 minutes. This article includes no major spoilers.

The hit-and-run accident, though shot from a distance, shockingly conveys the sudden violence of what a fatal car accident looks like. More than that, it starts a chain reaction of events that convinces Segev the hit was intentional and personal, part of a vendetta carried over from his former life as a mercenary. The affable tour guide dusts off his special-ops skills and doggedly pursues the truth from Tel Aviv to New York City, trusting no one other than himself and a few longtime confidants, whether they like it or not.

As the series advances, the emotional core of Segev’s motivation gets muddled. His drive becomes obsessive revenge — due process and other consequences to his actions be damned. Segev (whose name means “greatness” in Hebrew) leaves “antihero” in the rearview mirror, with the trail of corpses behind him far outnumbering his regrets or positive qualities. Anyone who helps him suffers.

There is a lot of casual neck-snapping as Segev, drawing on his special-ops training, treats most every situation as a war zone with its own set of “all’s fair” rules. When he takes to the streets, he’s generally looking to proactively crack skulls to find the information he’s looking for.

Refreshingly, most of the episodes buck the trend of presenting women as only “damsels in distress” or love interests. They are not adorned, objectified or romanticized, but instead are present because they are eminently capable.

For example, Segev asks Tali (the excellent Moran Rosenblatt, basically a second lead in the series) for help because she’s his cousin, and as a police officer, she is well positioned to investigate things for him. She is assertive in doing so, working hard and late into the night despite being six months pregnant. (Pregnancy becomes a bit of a ticking time bomb in the series — call it a “Chekhov’s pregnancy” — and also functions as a callback to Frances McDormand’s pregnant police chief in “Fargo.”)

And then there’s Naomi. Although she did date Segev 20 years ago, she’s now a journalist for New York Magazine, and that’s why Segev seeks her out. Naomi in particular gets self-assertive lines that are powerful, such as “I made this happen” and “I’m good at everything I do.” She doesn’t doubt herself, and while she wants to help Segev because they’re friends, she’s also unapologetically in it for the glory that will be hers if she convinces her bosses to print the story.

Naomi (Sanaa Lathan) wears a Star of David frequently and, when questioned about it because she is Black, takes the opportunity to remind everyone that Jews come in all colors. Her husband also seems to be pressuring her Jewishly; he wants them to go to Puerto Rico, to “do a little tikkun olam and make Rabbi Rachel happy.” Who is Rabbi Rachel, why do they need to make her happy and what tikkun olam opportunities are there in Puerto Rico? These are also cliffhangers — although less important to the overall plot — with no answers.

In addition to many overhead shots and camera pullbacks (providing new perspectives on Raz’s shaved pate), there are a lot of voyeur-style shots through giant skyscraper windows. Is there a mastermind watching, or are these shots simply misdirecting the audience? In any regard, after a while, the fancy camerawork feels manipulative and overused, as if a young director making his first big-budget production suddenly had a host of high-tech tools at his disposal. (Or maybe someone got a discount on drone rentals.)

It’s interesting that “Hit & Run” became available on Netflix the same weekend as “The Suicide Squad” opened in theaters and dropped on HBO Max. The latter is a DC Comics movie that centers on a band of supervillains who are sent on “impossible” missions in exchange for time off their sentences. It’s certainly more violent and graphic than “Hit & Run,” but Segev’s special skills and sociopathic tendencies would undoubtedly have come in handy during Suicide Squad missions.

While exploring this idea, I came across a Suicide Squad comics storyline from 1990 in which the squad sneaks into Jerusalem seeking to catch or kill international terrorist and mad scientist Kobra. Who better to lead them through Jerusalem than a mercenary–turned–tour guide–turned–vengeful angel? Yes, Segev! (Or maybe Doron, Raz’s character in “Fauda.”)

Segev and Doron would likely have thrived in a comic-book storyline peppered with characters such as the Hayoth (superpowered Israeli commandos), Dybbuk (an artificial intelligence member of the Hayoth) and Col. Hacohen (of the Mossad).

And when Ramban, the Suicide Squad’s kabbalistic magician, has a long talk with Dybbuk about morality and the true nature of good vs. evil, Segev and Doron undoubtedly would have their own opinions to share about the ends, the means and what is justified in a time of national or personal war. PJC

Esther D. Kustanowitz is a TV columnist for J. The Jewish News of Northern California, where this first appeared.