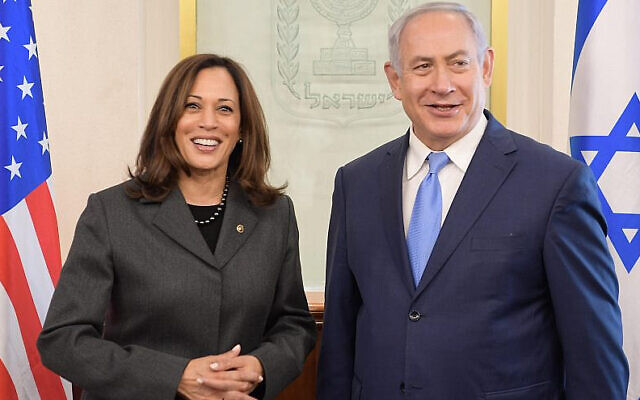 Kamala Harris when she was a California senator with Israeli Prime Minister Benjamin Netanyahu in 2017. (Photo by Amos Ben Gershom/GPO via JNS)

According to a readout from the Prime Minister’s Office, Harris commended “the great success of the vaccine campaign in Israel.”

The two leaders agreed to establish a joint team to tighten cooperation in research and development in the fight against COVID-19, as well as boost efforts in clean water, green energy and other related areas.

It also said Harris expressed “the American administration’s complete opposition to the decision of the prosecutor of the ICC in The Hague.”

On Wednesday, the ICC announced that it would begin its investigation into alleged war crimes committed by Israel and the Palestinians in the disputed territories since June 13, 2014. The U.S. State Department has also condemned the ICC decision and said the court lacks the jurisdiction to launch the probe.

Netanyahu also told Harris that intelligence and security cooperation would continue to be strengthened between America and Israel, and that he was “totally committed” to preventing Iran from acquiring nuclear weapons.

In a readout from the vice president’s office, Harris said the two agreed to continue to cooperate on the Iranian nuclear issue “and the regime’s dangerous regional behavior.” PJC