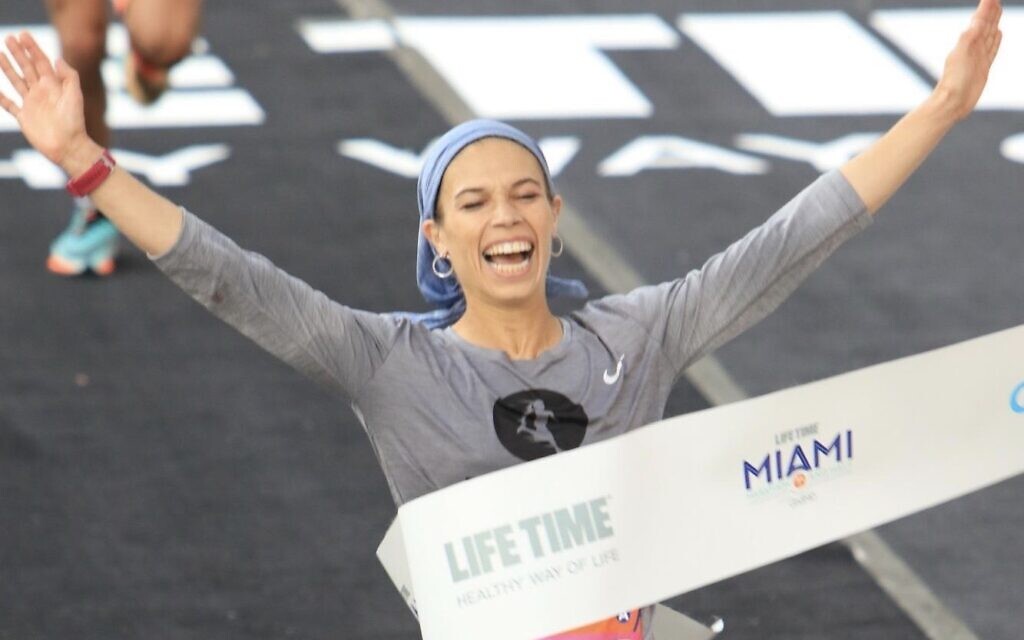 Beatie Deutsch crossing the finish line to win the women's category of the 2020 Miami half-marathon race. Photo by Marathon-Photos.

Beatie Deutsch, Israel’s women’s marathon champion, believes that each of us has gifts we’re meant to use to make the world better. Hers is running.

The self-branded “Marathon Mother,” who is Orthodox, runs in modest dress — a below-the-knee skirt, head scarf and long sleeves — and does not run on Shabbat. She says morning blessings in her warmups and listens to Torah classes during her runs.

Deutsch, 31, is poised to qualify for the postponed Tokyo Olympics, but because of her faith might be unable to participate. Her race was moved from its usual Sunday to a Shabbat in August 2021.

Running might not seem like an obvious violation of Shabbat, but because it is Deutsch’s job — Israel pays her to train — it’s forbidden.

The New Jersey native, who made aliyah at 19, started running in her mid-20s after having four children in a span of six years. Wanting to consistently exercise, she set a goal.

“Most people do the couch-to-5K route,” she said. “I did the couch to marathon.” 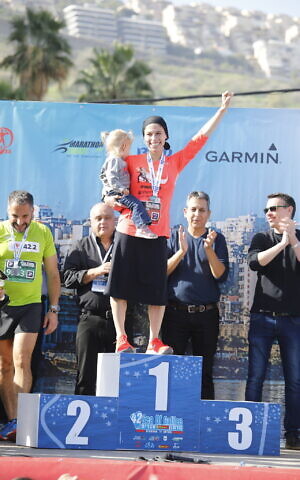 Beatie Deutsch on the podium with her daughter after winning the 2019 Tiberias Marathon. Photo by Tomer Feder.

Though Deutsch runs marathons, her journey has been more of a sprint.

She placed sixth in her first marathon just four months after she started running. The next year, she ran the Tel Aviv Marathon while seven months pregnant with her fifth child, embodying her “Marathon Mother” moniker.

And two years later, Deutsch won Israel’s National Championships Marathon in Tiberias in 2:42:18, a time that would have qualified her for the 2016 Olympic women’s marathon. That’s when the Olympic Committee of Israel began sponsoring her Olympic training.

In March 2019, the Olympics introduced new standards for the 2020 Games, slashing the qualifying standard for the women’s marathon to 2:29:30.

There are two ways to qualify: Run the standard or rank in the top 80 in the world at the Olympic designated cutoff point. Deutsch clocked in at 2:32:25 at this year’s Tiberias Marathon, missing the standard but reaching the top 80. 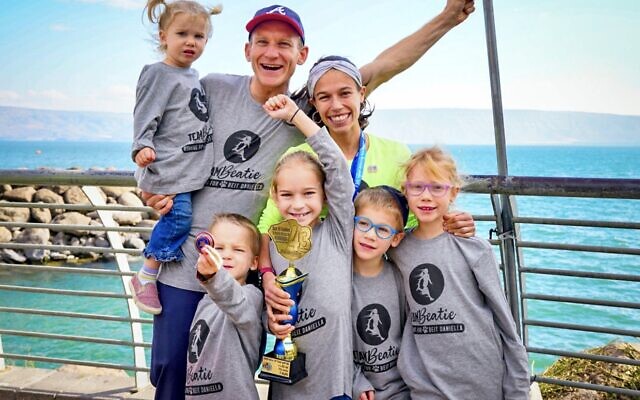 Beatie Deutsch with her family at the 2020 Tiberias Marathon. Photo by Jordan Polevoy.

But with the Olympics postponed due to COVID-19, the cutoff deadline is also pushed back, likely to next spring, and qualifying races are suspended until this December. In order to qualify, Deutsch either needs to run the standard or rank in the top 80 at the new cutoff point.

Each day, except Shabbat, she trains hard, working to beat the standard. On workout days, she wakes up at 5 a.m., runs until 8:30 a.m., does strength training at the gym, works out some more (often a swim or another run) and completes a flurry of tasks — she cleans the house, posts on social media, responds to emails and picks up the kids from school — all before bed at 10 p.m.

But even if she runs the standard, she won’t be able to compete in the Olympics unless the date is changed.

Deutsch asked World Athletics, the governing body for running events, for an accommodation based on her religious practices. She saw her struggle as bigger than herself, one that religious athletes across the globe might face.

“I think sometimes, religious teenagers [and] youngsters feel like ‘I can’t go into sport,’” she said. “I just want to give hope and inspiration to people like that.” 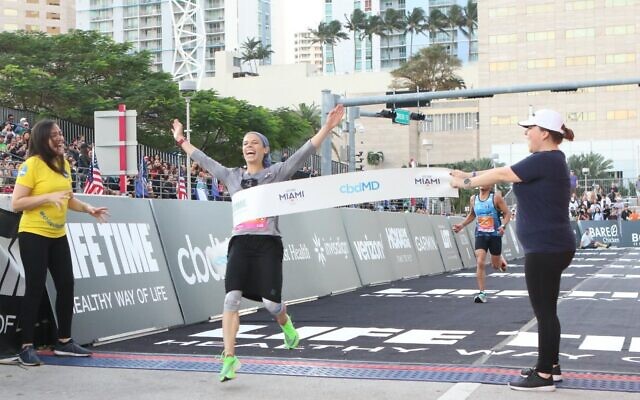 Beatie Deutsch crossing the finish line to win the women’s category of the 2020 Miami half-marathon race. Photo by Marathon-Photos.

World Athletics, however, told Deutsch that it would not change the women’s marathon date.

Then came another blow — this one from the International Olympic Committee. “While we put athlete considerations first in all decisions, particularly health and welfare, we are unfortunately not able to adjust the schedule to the particular situation of each individual athlete,” a spokesperson for the IOC told The Telegraph in July.

Fellow Shabbat-observant Jew Akiva Shapiro, a New York lawyer whose parents have lived in Pittsburgh for more than two decades, heard about Deutsch’s story from a friend. He reached out to Deutsch, offering to make a reasonable accommodation request to the IOC on her behalf.

“Athletes of faith kind of hit a glass ceiling — whether they’re Jewish or Muslim or Christian or anything else — where they’re forced to choose between their faith and their sport,” said Shapiro. “That’s not consistent with the Olympic ideals.”

In a letter sent to the IOC president and executive board members last month, Shapiro laid out Deutsch’s case, noting, among other things, that the IOC moved events and set up alternative meal times at the 2012 Olympics to accommodate Muslim athletes’ fasting during Ramadan.

If the IOC continues to decline the request, a next step could be appealing to the Court of Arbitration for Sport, based in Switzerland, which resolves sports-related disputes including those between athletes and the IOC.

The stakes are high.

“There are probably a lot of up-and-coming athletes that are going to look to her struggle, and if they see that it’s possible to have it all — to compete at the highest level and be observant — that will be inspiration and motivation for them,” said Shapiro.

Deutsch is public about her path, posting regularly on social media to 13,000+ followers on Instagram and 5,000+ on Facebook. She is candid in her posts, discussing motherhood, running and mental health — she raises money for Beit Daniella, a therapeutic program established to help people struggling with mental health issues transition out of hospitals. 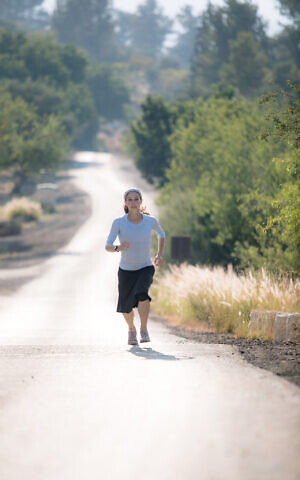 Even if her request to the IOC is denied, she said, “At least I showed many Jews all around the world that it’s OK to speak up. Hopefully, for everyone, we’re moving toward a place where we can be more tolerant and understanding and accepting of everyone’s differences.”

She already has seen the impact of her story. Since she started running, Deutsch has noticed more Orthodox women doing the same. People who used to be embarrassed running in a skirt told her that they don’t feel ashamed anymore.

“Someone told me, ‘I never would have imagined myself doing this, but I started talking to God while I was running,’” Deutsch said. “And I was like, ‘All right, my job here is done.’”

As Deutsch awaits the IOC’s decision, she’s staying positive. “I’m lucky that I have a lot of faith and trust in God,” she said. “Whatever Hashem wants for me is what I’m meant to do here.” PJC