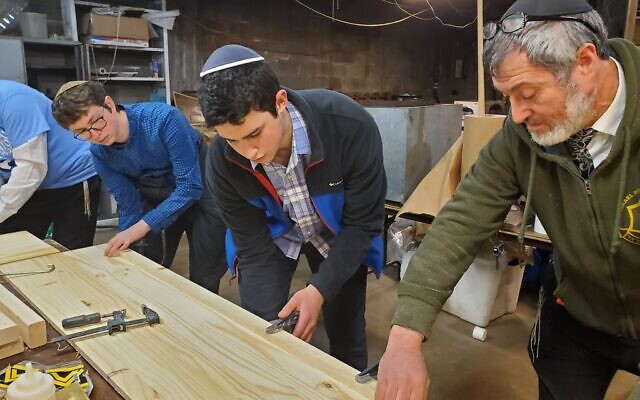 Rabbi Daniel Wasserman teaches students how to clamp boards for a casket. (Photo by Adam Reinherz)

For more than a decade, the burial society was a passion project of the rabbi who served as its president and did everything from picking up deceased community members to building caskets. No detail, it seemed, was too insignificant for Wasserman, who worked to ensure a dignified final life cycle event for all in need.

Now that Wasserman has left his post as rabbi at Shaare Torah Congregation and moved to Israel, a committee will oversee the work of Gesher HaChaim, explained Rabbi Moishe Mayir Vogel, the executive director of the Aleph Institute who worked with Wasserman as part of the Vaad Harabonim of Pittsburgh.

Gesher HaChaim, Vogel said, began as an alternative to traditional funeral homes for the Orthodox community.

“It provides that resource without the frills,” he said. “In the Orthodox community, we don’t want the frills. We don’t need a beautiful casket made out of who-knows-what and hammered with nails because we don’t put nails in our caskets. We want it plain and simple.”

Vogel stressed there are funeral homes available locally for those who want a more elaborate service — and that he is pleased they exist. But many Orthodox community members don’t want a formal funeral service, he said.

“I’m a Lubavitcher and the Rebbe’s [funeral] wasn’t in a shul. It was from his office straight to the cemetery. That’s the way we do it,” Vogel said. “In Lubavitch, we don’t even do a eulogy. The Rebbe, who could have had beautiful eulogies, didn’t. It’s straight from the taharah to the burial.”

Vogel said that by conducting burials in this manner the service is completed for a fraction of the cost.

Stephanie Small, president of the board for the newly constituted Gesher HaChaim, said Wasserman took pains to select volunteers willing to help the burial society before he left Pittsburgh.

The new governing body, she said, is committed to continuing Jewish burials with the methods Wasserman initiated while still updating the organization.

“We’re writing bylaws, we have flow responsibilities,” Small said. “We are trying to take what was not entirely a one-man job — [Wasserman would] tell you that he could never have done this without the support of a cadre of people — from a person-led endeavor to a community-involved endeavor.”

Gesher HaChaim is anxious to help people with their burial arrangements, Small said, adding that it is helpful for people to make plans before they are needed.

It’s also important, Small said, for people to understand that the burial society is different from the Chevra Kadisha, which prepares bodies for funerals and provides shomers who stay with the deceased until they are buried.

“We work hand-in-hand with the Chevra Kadisha,” Small said. “We could not do the work we do without them because it’s such a major part of an Orthodox burial.”

Gesher HaChaim, she said, is responsible for everything from picking up the body, contacting the cemetery to arrange for funeral times, arranging with the Chevra Kadisha to do the taharah, helping the family, ordering death certificates and registering the death.

“Everything traditional funeral directors do, Gesher HaChaim will continue to do in the model Rabbi Wasserman set up,” Small said.

When Wasserman began offering funerary services, his efforts were the subject of litigation. After he conducted a religious burial in 2009, a commercial funeral director accused him of breaking state law and reported him to the State Board of Funeral Directors. That report led to the rabbi’s investigation by the Pennsylvania Bureau of Enforcement and Investigation for “practicing as a funeral director without a license.” He was investigated for 28 months due to multiple subsequent complaints by funeral directors for conducting the funerals of other members of his congregation in 2010 and 2011 under similar circumstances.

In 2012, Wasserman won the right for religious organizations to conduct funeral and burial services without a licensed funeral director. At the time, Wasserman said, “This is an important victory for religious freedom in Pennsylvania … William Penn would be proud.”

Gayle Kraut, who serves on Gesher HaChaim’s board, said the transition in organizational leadership since Wasserman’s departure has been seamless. In fact, she noted that the rabbi has made himself available to the burial society whenever it needs assistance.

She said those in leadership were all chosen by Wasserman and there are myriad volunteers — from those building caskets to those picking up bodies — who are working to ensure that everything the rabbi oversaw continues to be handled competently.

“I think we realize that this is the responsibility of the community to figure out and not leave in the hands of one person,” Kraut said.

Rabbi Elisar Admon, another member of Gesher HaChaim’s new leadership team, said the community will be an important part of the process moving forward.

“Rabbi Wasserman used to be the halachic leader during the process,” Admon said. “Now families will go to their rabbi. We want the synagogue or community rabbi or family rabbi to be more involved in the process.”

Admon hopes that the Pittsburgh Jewish community recognizes the value of Gesher HaChaim and is willing to help continue Wasserman’s vision.

“Hopefully, the community sees this in a positive way and will be willing to be devoted to it,” he said. “If not, I’m not sure Gesher HaChaim can continue because no one is able to do what Rabbi Wasserman did, working 15-plus hours a day.” PJC