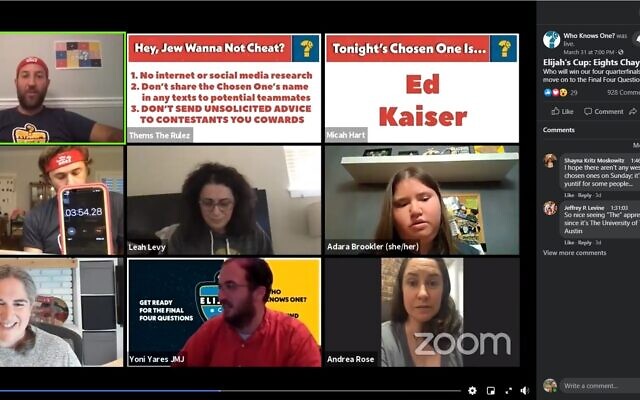 South Hills rabbi Emily Meyer and "Kisses and Knishes" teammate Leah Levy, were recently knocked out of "The Elijah Cup" tournament ran by the gameshow "Who Knows One?" Screenshot by David Rullo

How quickly could you find a random Jew living somewhere in the United States?

That is the question on which Micah Hart has based his social media game show “Who Knows One?” Think of it as Jewish geography on steroids.

In the game, two two-member teams compete to find a connection to a person identified as “The Chosen One.” The teams reach out to people they know across the country seeking links, using clues given by Hart that become progressively more specific.

In a recent episode, Rabbi Emily Meyer of Upper St. Clair and her friend Leah Levy formed team “Kisses and Knishes.” They competed against team “Jews Meet Jersey” to find a connection to The Chosen One: Ed Kaiser.

Kaiser was originally identified only as a 51-year-old who used “he/him” pronouns and grew up in Charleston, South Carolina. During the 22-minutes of game play, contestants learned Kaiser’s high school, that he belonged to BBYO as a youth, where he graduated from college, what Jewish camps he attended, where he currently lives, his synagogue and what he does for a living.

To the chagrin of Pittsburgh Jews across the South Hills, “Kisses and Knishes” lost to “Jews Meets Jersey” when the out-of-state team was able to connect with Marisa Kaiser, The Chosen One’s sister-in-law.

With the win, “Jews Meets Jersey” advanced to the next round of “Elijah’s Cup,” a round-robin tournament inspired by March Madness.

Hart created the game, typically played on Wednesday and Saturday nights, after getting laid off from his job as the head of digital marketing for Buffalo Wild Wings due to COVID-19.

“I’ve enjoyed playing Jewish geography over the years and thought it would be a fun thing to try,” he said.

Hart, who lives in Atlanta, Georgia, credits Jewish summer camp with providing inspiration for “Who Knows One?”

“This is all built out of my love for summer camp and my memories of growing up in camp and getting creative and coming up with funny games,” he said.

He is also is the host of “Campfires and Color Wars,” a podcast about summer camp memories. Hosting that bi-monthly show gave him the confidence, he said, to create “Who Knows One?,” his Jewish version of “Six Degrees of Kevin Bacon” — a parlor game based on the assumption that every actor can be connected through their film roles to Kevin Bacon within six steps.

Hart has been able to find enough support and sponsors to turn “Who Knows One?” into his pandemic job. It has become so popular that he has taken the show on the virtual road, doing community versions of the game for different congregations and Jewish Federations, and even has involved those outside the Jewish community.

Hart recently hosted a version of the game for the American College of Emergency Physicians in which ER doctors attempted to connect with other ER doctors, and he created “Desi Chain,” a similar game for the Indian community.

Hart believes the virtual game show’s success can be attributed in part to disconnection during the pandemic.

Meyer, a Reform rabbi, attempted to broaden her links for her appearance on “Who Knows One?” by teaming with her longtime friend who has connections in the Conservative movement. Meyer prepared for the show by printing out a map of the United States and writing down the names of contacts in each state who would be helpful to find connections to whomever might be The Chosen One.

“It was fun,” Meyer said. “I got to connect with people I haven’t heard from in a long time. I got to make new connections, people are watching, and people are having fun talking to each other in the comments. I’ve met some professional contacts through the comments. It’s just been like an easy way to be with other people.”

Lynn Berman was recently featured as The Chosen One in an episode of the game she said was “weirdly compelling and brilliant.” She had signed up to be a Chosen One on the show’s website.

Berman first heard of the program on social media in its nascent stage when it was known as “Zoom Jewish Geography” and thought it sounded fun. The Squirrel Hill resident is now hooked. She regularly watches the program, even when she does not know the contestants or The Chosen One.

“It shows us that we’re all connected,” Berman said. “I think that even after this is all over, which God willing it will be, it will still be entertaining. Not in the same desperate need for connection, but for the fun of realizing the connections within the Jewish community.”

Hart isn’t sure what will happen to the game once the pandemic has ended, but he is thankful for the opportunities it has created.

“That’s the existential question that a lot of people ask me,” he said. “I didn’t anticipate any of this happening, so, on some level, it feels like I’m playing with house money. If it lasts for two more months, I’ll be grateful and if it lasts for another 10 years, I’ll be grateful. That said, I think there is a place for this, even in the post-pandemic environment because I think we’ve all been disconnected from each other and this is a fun way to reconnect.” PJC