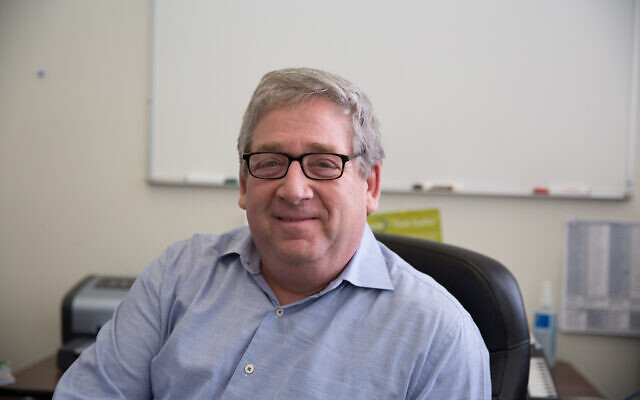 So, how does a doctor from the boomer generation become head innovation officer at AHN? As Cohen recounts it, getting his position was bashert — the Yiddish word for fate.

Cohen grew up in Port Jervis, New York, and went to Syracuse University for undergrad and med school. He completed his residency at Case Western University in Cleveland, Ohio, where he met Ellen, a Pittsburgher, who “thought that the center of Western civilization was the corner of Forbes and Murray,” he said. The pair got engaged, and after a fellowship in Texas, Cohen was in an enviable position: His chosen field — oncology with a sub-specialty in surgical oncology and urology — was in demand.

“I had offers literally all over the country,” he said.

Cohen presented the possibilities to his fiancée, who made it clear that his options weren’t as limitless as he thought.
“I said, ‘Where do you want to move when we get married?’” Cohen recalled. “She said, ‘Pittsburgh. We are moving to Pittsburgh.’”

In 1985, his new father-in-law introduced him to a physician at Allegheny General Hospital who took him on as a partner. He thrived there, and in 2016, was named president of the hospital.

“It was the people that were important, the patients,” Cohen said of his role, which he took on after a stormy period for the hospital that included bankruptcy. “That’s why we’re here. We focused on the fundamentals. We took care of the patients and we moved forward.”

During his tenure, the unthinkable happened: In 2017 an anti-Semitic gunman attacked the Tree of Life building, murdering 11 worshipers at Dor Hadash, New Light and Tree of Life, where Cohen was a member. The shooter, who was wounded by police during the attack, was transported to AGH. Cohen visited him to make sure he was comfortable.

“We don’t ask a patient who they are or where they came from,” he told the Chronicle in 2018.

In 2020, Cohen stepped down as president of AGH to focus on medical technology instead. He had already made inroads in the industry, serving since 1992 as chief medical officer and then CEO of ChemImage, a molecular chemical imaging company.

When he told his supervisor, James Benedict, and Allegheny Health Network administrators of his plan, they decided to work with him on the new project. So Cohen, Benedict, AHN President and CEO Cynthia Hundorfean and Highmark Health President and CEO David Holmburg repurposed the former Suburban General Hospital in Bellevue as their headquarters. It was an appropriate choice, given its history.

AGH’s decision to close Suburban in 2010 , Cohen said, is “endemic of what is going to happen to health care over the next 10 years. The idea is, how do you repurpose a hospital that used to be a community asset in a disadvantaged community?”
Cohen and his team at AHN have partnered with tech incubator AlphaLab to create AlphaLab Health to find the next generation of medical technology companies.

“If you look at the fundamental revolution that we’re going through, it’s the transformation from a manufacturing-based world to a digital world,” Cohen said.

Cohen compares the paradigm shift in health care to the displacement of steelworkers several decades ago. A new generation has a better understanding of technology and how to use it in industry.

AlphaLab Health selects companies to work with, gives them rental space at the former Suburban General Hospital, and invests $100,000 to help them grow. Though they recently selected seven companies to assist, COVID-19 has disrupted the disrupters.

“Right now, it’s all digital until such time we get through the pandemic,” Cohen said. But whatever form the project takes, he’s committed.

“They ask you why you want to go to medical school and the answer is always the same: You say, ‘I like science. I want to help people,’” Cohen said. “You find out 35 years later that is really true. People come to me with the worst problems in their lives. My job is to figure out how I can help.” PJC