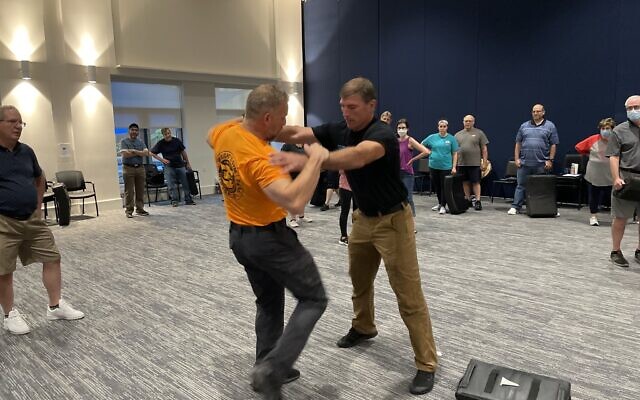 Not everyone is looking for lessons in self-defense. But the Jewish Federation of Greater Pittsburgh wants to make sure community members have access to those lessons if they want them.

“This may not be for everybody, and we understand that,” Shawn Brokos, the Federation’s director of community security, told a crowd of about 50 people at the Jewish Community Center of Greater Pittsburgh in Squirrel Hill on July 17. “But we wanted to make this available to people if they wanted to come in and really learn what fighting looks like.”

The Federation brought Wright’s Gym to the JCC to teach self-defense techniques, what to do in an active shooter situation and more to a rapt audience.

“Our goal today is to help make you more safe and to have a little fun along the way,” said Dave Wright, a former police officer of 27 years who has trained other police officers in use of force techniques. Now, as the owner of Wright’s Gym, he sometimes leads security training events like the one sponsored by Federation.

Wright was joined by Mike Saldutte, a Pittsburgh Police officer who also works at Wright’s Gym.

Together, Wright and Saldutte led the event through three major parts: a presentation on crime statistics and the mind of an active shooter; a hands-on self-defense lesson; and a final section on weapons awareness and disarming techniques. The event was broadly based on the Run, Hide, Fight protocol that is standard in active shooter response training.

Training at synagogues, day schools and other organizations typically covers the Run, Hide, Fight technique, Brokos said. “But we don’t focus on the fight piece. That’s kind of where we leave class and we have people coming up to us saying, ‘What if I have to fight?’ We said that we need to empower our community so our folks know how to fight if they have to.”

Wright and Saldutte explained that following rises in crime and antisemitic incidents, demand for self-defense trainings often increases as well.
“We’ve been doing active shooter events probably for 10 years off and on,” Wright said. “And unfortunately, we get the calls after a [violent] event.” 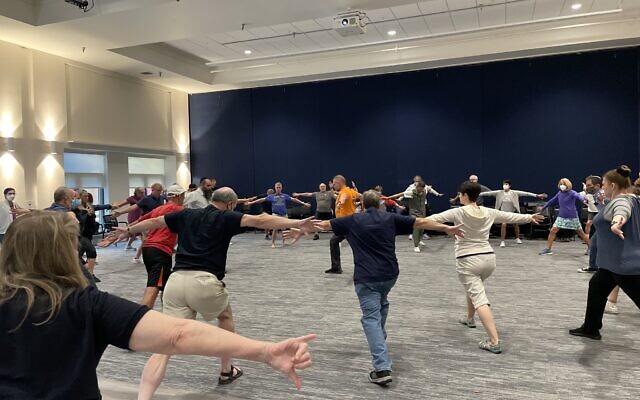 Attendees warm up at security training (Photo by Ethan Beck)
The first portion of the training included background on active shooter incidents, ranging from an overview of situations that could lead someone to commit violence, to the difference between a spontaneous shooter and a non-spontaneous shooter.

While a recent string of mass shootings has led Wright’s Gym to offer more security and self-defense training sessions, the Federation had tried to arrange a communitywide event for a while, Wright said.

“I think that Shawn got a hold of us about six months ago,” he said. But between timing issues and COVID surges, it took until this summer for the event to come to fruition.

For Squirrel Hill resident Mark Haffner, the session was a positive experience, even though it wasn’t his first lesson in self-defense.

“I took one of these trainings a bit after Tree of Life happened, and it was really helpful,” Haffner said. “The first one was good. I learned a lot, but I think this was even more hands-on than the other one was. The two guys that were instructing were really good and had a lot of patience. They made it worthwhile.”

After the presentation and a series of questions from the audience, the chairs were cleared from the center of the room and Wright led the crowd in a series of exercise warm-ups. There was a combination of energy in the room, stemming from both the seriousness of the topic and the excitement of the self-defense training.

“It’s a really heavy and difficult topic, so hopefully people had fun,” Brokos said. “We had some survivors here from the Tree of Life [shooting]. So I give them credit for coming and being an active participant in this.”

Now that the first training has been a success, Brokos wants to do more.

“I want to make sure everybody in the community who wants to come has a chance to do this,” Brokos said. “I really credit the community with coming out and being so engaged and taking it so seriously because, at the end of the day, we are each other’s best advocates and assets.”

As Wright and Saldutte taught the crowd how to throw a punch or distributed prop guns to practice disarming techniques, they emphasized how basic training is just one aspect to being safe. Like keeping fit, Wright said, safety practice must be ongoing to be effective.

“The more people know about it and can show up in attendance, the better for them,” Saldutte said. “This type of training does work.”

The Federation’s next Advanced Community Active Threat Training With Defensive Tactics will be held at the JCC South Hills on Sunday, Aug. 14 at 12:30 p.m. To register, go to jfedpgh.org/catt-august. PJC