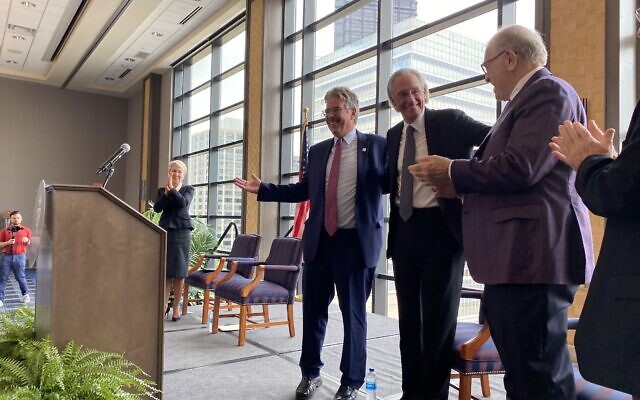 The law school of Duquesne University has a new name, thanks to a $50 million gift from an alumnus recognized as one of the country’s top courtroom litigators.

Thomas R. Kline — a Philadelphia-based lawyer selected as the No. 1-ranked attorney among 65,000 active Pennsylvania lawyers by the publication Super Lawyers every year since its inception in 2004 —donated earlier this month, leading officials to rename the 111-year-old law school the Thomas R. Kline School of Law of Duquesne University.

Kline stressed it was not out of the ordinary for a Jewish professional to gift millions to one of the nation’s most highly regarded Catholic universities.

“Yes, it’s a Catholic university with a strong tradition, but it allows education to go forward unimpeded and unrestricted; that was my experience at the law school,” Kline, who graduated there in 1978, told the Chronicle. “It was completely positive as a young Jewish man.”

“Duquesne was a great place for me — and a perfect fit to give back to young people like me,” he added.

Kline made a similar donation to Drexel University in 2014, which likewise led to the renaming of its law school after Kline. Kline also donated to Society Hill Synagogue in Philadelphia to establish a learning center in memory of his wife, Paula, who died in 2004.

Kline attributes his philanthropic zeal to the values his parents taught him.

“It is enormously meaningful for Duquesne to have our law school named for an individual whose career success is synonymous with excellence in the legal profession,” said Ken Gormley, Duquesne’s president, who formerly served as dean of the law school. “We are grateful that Tom Kline has chosen to support his alma mater with such a transformational gift, recognizing the many contributions to society and the profession that our students and alumni have made for more than a century.”

“We’re proud that one of our most distinguished alumni, who has represented Duquesne so impressively on a national and global stage, will now help shape the next century of our renowned law school,” he added. “This gift will benefit generations of students, graduates and members of society on a broad scale.”

Kline’s gift is the single-largest commitment to the uptown university in its 144-year history. Kline already held the distinction of being the largest donor to the law school, with a $7.5 million gift in 2017 to launch the Thomas R. Kline Center for Judicial Education, which assists the courts in providing continuing judicial education to judges across the commonwealth.

Kline often is named among the most respected and influential lawyers in the U.S. today. He is a founding partner of Kline & Specter, described by The Philadelphia Inquirer as “one of the nation’s leading personal injury firms.” The National Law Journal has listed Kline among “Ten of America’s Top Litigators.”

Lawdragon lists Kline as one of the top 500 lawyers among 1.3 million active lawyers in America. He is the past president of the Inner Circle of Advocates, which The Washington Post described as “a select group of 100 of the nation’s most celebrated trial lawyers.”

Kline called his $50 million pledge part of “a progression” that started with his 2017 gift to jump-start the judicial education center. He said his gift “ultimately was motivated by … a visit I had to the campus.”

“At a lunch session, students were full of energy and imagination, and they were asking great questions,” Kline told the Chronicle. “At the time, I said, ‘These people were me, just two generations removed.’ I felt at home.”

Kline said his own time at Duquesne University’s law school “gave a sound grounding in the law, designed to help you assure you passed the bar … and succeeded as a lawyer.”

Kline achieved many landmark jury verdicts dating back to the 1980s with seven- and eight-figure jury awards in each of five decades. Recent accomplishments include his jury verdicts in the Johnson & Johnson/Risperdal litigation, winning an $8 billion award for his clients, and his leadership as chair of the Plaintiffs Management Committee, which achieved the historic Amtrak 188 settlement. Kline’s advocacy in the Penn State/Sandusky litigation and the Piazza fraternity hazing case also gained national attention.

“Working with Tom Kline has been an inspiration and absolute joy,” law school Dean April Barton said. “He is an exemplary embodiment of our distinct mission. He understands the history and value of Duquesne’s commitment to educational access and our focus on the law as a tool to ensure the welfare of all people. This is an extraordinary moment for Duquesne, certainly, as well as for the entire legal community. Linking Tom Kline and Duquesne permanently in the name of the law school will empower future lawyers for generations to come.” PJC