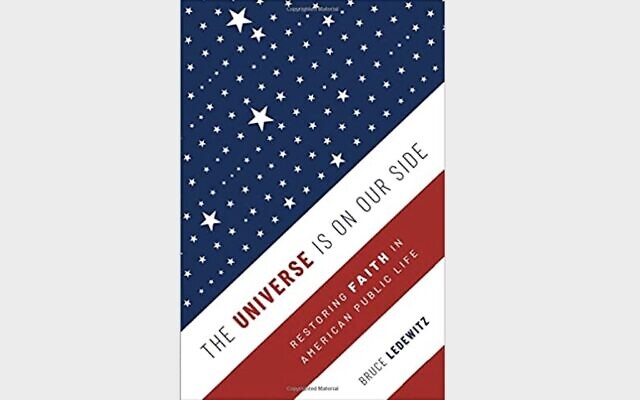 Book cover, "The Universe is On Our Side," by Bruce Ledewitz (Oxford University Press)

This article was updated at 12:20 p.m. on Jan. 18 to note the change of date for Bruce Ledewitz’s speaking event at the Carnegie Library Lecture Hall.

Bruce Ledewitz, a professor at Duquesne University School of Law, has found himself grappling with the implications of a fractured American society.

In his new book, “The Universe is On Our Side: Restoring Faith in American Public Life,” published by Oxford University Press, Ledewitz examines how U.S. society started wearing around the edges in 2016 — and the best ways to rebuild a secular society torn by divisiveness.

He was scheduled to speak on Jan. 20 in person at Carnegie Library Lecture Hall in Oakland, but the event has been rescheduled to March 3. It is sponsored by Pittsburgh Arts & Lectures and also is available virtually.

Ledewitz asks many questions. While he grew up immersed in Orthodox Jewish teachings — attending the New Haven Hebrew Day School, one of the seven Yeshivot established in America after World War II by Menachem Mendel Schneerson, or the Rebbe — around 2000, he started questioning the underpinnings of Judaism, God and organized religion.

In some ways, he said, the questions he is asking society in his new book are the same questions he posited to himself 10 and 20 years ago when he debated his own faith.

“What I hope to do is reopen that question — maybe open it for some people for the first time,” Ledewitz told the Chronicle.

Guided by the naturalism of Alfred North Whitehead’s process philosophy and the historical faith of Martin Luther King, Jr., Ledewitz argues in “The Universe is On Our Side” that we can work toward a trust that the universe bends toward justice and our welfare, which can complete our healing and restore faith in American public life.

Though he stressed the book is not critical of Judaism or religion in general, its focus is on secularism.

He also stressed that much of the dialogue on the subject is dangerously hyperpartisan, which only further divides people.

“I don’t think [my book] is partisan — I don’t think a Republican or a Democrat will react differently to this,” he said. “Suddenly, my political opponent and I are in the same boat — it’s ridiculous to think we’d be this broken and it would only be one side’s fault.”

Ledewitz, whose academic focus is on constitutional law, religion and law and jurisprudence, has contributed op-eds to the Pittsburgh Jewish Chronicle and also is a columnist for the Pennsylvania Capital Star. From his media perch, he has observed the political and social events of the last five-plus years unfold.

“This book is a product of the crisis of 2016,” he said. “The pandemic is just another example we have of not being able to deal with a problem.”
But the reckoning of current events might drive his new book less than stirring a spirit of conversation.

“What I’m hoping is someone, some people will read it and think about it, write about it,” Ledewitz said. “It is a new way to think about the breakdown of American life and, if it is broken, how do we build? How do we build a flourishing secular civilization?” PJC