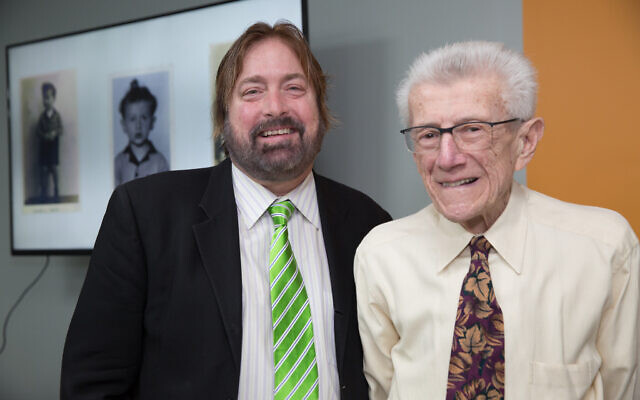 Dr. James Guggenheimer, a professor who taught thousands of aspiring dentists during a University of Pittsburgh career that spanned more than half of a century, died on Jan. 27. He was 85.

He leaves behind extensive research on the connection of the mouth and the health of the rest of the body.

Guggenheimer’s parents, Siegfried and Etta, fled Germany as the Nazis rose to power in the 1930s, in the years before World War II. Etta Guggenheimer was pregnant with her son at the time they trekked to Yugoslavia, and she gave birth to him there in 1936. The family moved to the United States three years later and settled in New York City.

“Technically, he was a Holocaust survivor as a child refugee,” his son Paul Guggenheimer, told the Tribune-Review.

Paul Guggenheimer and his father came to the Holocaust Center of Pittsburgh in the summer of 2018 to share his story as part of the group’s Generations Speaker Series.

Lauren Bairnsfather, who heads the Holocaust Center, said thinking of Guggenheimer reminds her of the early years of her career in the 1990s, when academics began discussing how to preserve the memories of an aging generation of Holocaust survivors.

“I can’t help but think how lucky we are to have survivors in 2022,” she said. “Of course, they’re irreplaceable.”

Guggenheimer earned a bachelor’s degree in biology from the City College of New York and attended Columbia University. He joined the University of Pittsburgh School of Dental Medicine faculty in 1966 and, for the next 55 years, taught oral medicine and oral pathology.

Elizabeth Bilodeau became a professor in Pitt’s dental school about 10 years ago. She has warm memories of Guggenheimer, whose office was one door down.

“He was very kind, very thoughtful,” Bilodeau told the Chronicle. “He was a great friend and he was definitely an academic. I think everyone who knew him knew he was a kind man. And his door was literally and figuratively always open.”

Guggenheimer was fascinated by the mouths of people with preexisting conditions, Bilodeau said: users of smokeless tobacco, people battling diabetes or stomach problems, and even those experiencing drug interactions.

Above all else, though, he loved mentoring. Bilodeau said Guggenheimer served as a wise elder statesman for her and countless students.

“Literally thousands of students, very well-established dentists who’ve been out of school for decades — he was their dental professor,” she said. “He really was a fixture within this department.”

Guggenheimer was raised Jewish but did not actively practice. His wife of nearly 53 years, Constance “Connie” Guggenheimer, was Christian. The two met at a get-together for medical interns at the old Montefiore Hospital in Oakland, and she had three children from a previous relationship. Guggenheimer wasn’t fazed, his son said.

“He knew he was getting into a potentially challenging situation, and he didn’t bat an eye,” Paul Guggenheimer said. “To decide you’re going to take on something like that shows the kind of human being you are — and he was always big-hearted.”

Paul said he and his two brothers were 8, 7 and 4 years old when their mother met Guggenheimer.

“He had no blueprint; there’s no blueprint for that,” Paul Guggenheimer said. “But he certainly tried very hard to be the best father he could be for us.”

Guggenheimer retired from Pitt in December, gaining the title of professor emeritus.

“I think if weren’t for the pandemic, he would’ve kept going,” his son said. “Basically, he worked his whole life — he died 27 days after he retired.”

In addition to his wife and son Paul, Guggenheimer is survived by sons Peter (Amy) Guggenheimer and Gregor Guggenheimer; grandchildren Allison and Lucas; nephew Sean Brennan; and sister-in-law Gail Brennan.

A funeral service was held on Feb. 8 in Fox Chapel, followed by a reception and a private interment. PJC