Jewish life is what you make of it at Concordia of the South Hills.

Despite the COVID-19 pandemic, the Jewish residents of the senior retirement community in Mt. Lebanon have found ways to embrace their Jewish roots while building relationships with those of different faiths.

Concordia is owned by Lutheran Ministries, but the facility on Bower Hill Road, formerly known as The Covenant at South Hills, was built by B’nai B’rith and opened in 2002.

Concordia has independent living apartments, assisted living units, memory-support beds and skilled nursing beds. The project was B’nai B’rith’s first foray into the private senior housing market. After seven years of mismanagement, B’nai B’rith filed for bankruptcy in 2009, and the facility, which cost the Jewish organization $60 million to build, was purchased by Concordia for $15 million at a court-ordered auction.

The facility remains a home to many Jewish residents.

Both Temple Emanuel of South Hills and Chabad of the South Hills have worked to bring Judaism to those Jews living in the Christian facility. For the last 13 years, Temple Emanuel’s Melinda Freed led Shabbat services at Concordia twice a month. Services were paused in March last year due to COVID-19 concerns but Freed began leading them again in August.

Prior to the pandemic, Freed would walk through the dining room pre-Shabbat, chatting and building relationships with both Jewish and non-Jewish residents. These chats also served as a reminder to those residents observing a yahrzeit that Shabbat services were available, even if they were not regular attendees.

In spite of the need to socially distance, new residents have joined Freed’s Shabbat services, which she conducts on a large screen rather than using siddurs during the pandemic. For Chanukah, Temple Emanuel Rabbi Aaron Meyer shared a recorded daily video of the menorah lighting along with the accompanying blessings.

Batya Rosenblum, co-director of Chabad of the South Hills, also has worked to foster Jewish life at Concordia. Her activities there pre-coronavirus, though, were very different from what she is able to do now. 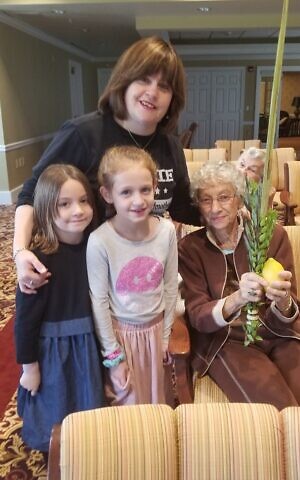 Batya Rosenblum and her daughters, Sarale and Rochel, visited Concordia of the South Hills often before the COVID-19 pandemic. Photo provided by Batya Rosenblum.

“I used to have a monthly program [called] ‘A Taste of … ,’” she said. “‘A Taste of the High Holidays,’ ‘A Taste of Chanukah,’ ‘A Taste of Shabbat.’ I would bring in visuals and we would have an interactive discussion. I always liked to hear their memories.” The program was typically capped by refreshments that reflected the theme of the discussion.

Rosenblum would also visit residents in their rooms, bringing “the joy of Judaism to their room, whatever they needed,” she said. “Whether it was a song, a story, a good Shabbos. Many times, I would bring cards from kids.”

Rosenblum’s husband, Rabbi Mendy Rosenblum, also would visit the Jews at Concordia prior to the pandemic. For the High Holidays, he trekked three miles from his home to the facility to blow the shofar for the residents.

“Since the pandemic, we haven’t been able to set foot in there,” Batya Rosenblum said.

Chabad of the South Hills, though, has been able to drop off cards made by local children as well as Shabbat packages which include kosher food items and some extras, like flowers. Concordia does not provide kosher food, although it offers holiday-themed meals for its Jewish residents.

For many residents, it is location rather religion that attracted them to the senior community.

Both Mazerov and Toder lived across the street on Bower Hill Road when the facility was still known as the Covenant at South Hills. They decided to move into Concordia to stay in their own neighborhood rather than relocate to Squirrel Hill to a facility where Jewish life might be richer.

While religious and social options are limited because of COVID-19, the pandemic has created opportunities that might not have existed previously. Toder Zooms Shabbat services at Beth El, and Mazerov said that while there were no High Holiday services at the residence, they were able to access services online wherever they chose.

Prior to the pandemic, Temple Emanuel’s Early Childhood Development Center would bring students to Concordia as part of its “Grandfriends” program, which Mazerov described as “very, very dear.” Those in-person visits were suspended last March, but they have continued online. 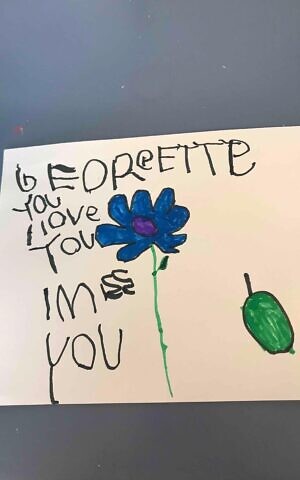 Residents of Concordia are not able to visit each other’s apartments during the pandemic, but they still have the ability to get together.

“Some people play cards together; others have coffee seven feet apart,” Toder said.

Mazerov passes much of her time watching movies or reading books from the residence’s library. Before the pandemic she belonged to a book club.

For Toder, the resumption of the Yiddish Club will bring a welcome return to routine.

Of course, when that routine will return is anyone’s guess. Concordia is waiting for the state to announce when its residents will receive the vaccine.

Until then, Mazerov said, “We’re walking the halls and if it’s nice out, we’re walking outside.” PJC

David Rullo can be reached at drullo@pittsburghhewishchronicle.org.