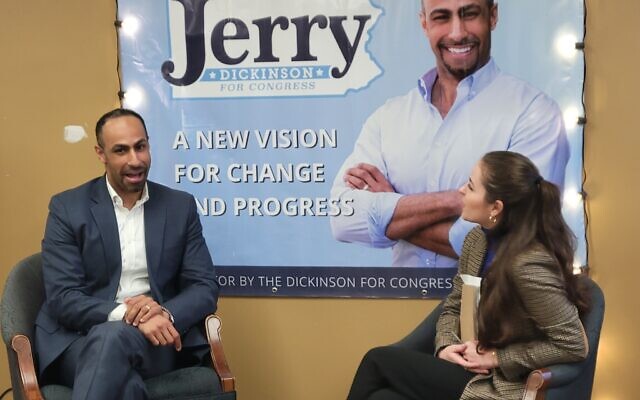 Jerry Dickinson spoke at a forum organized by the CRC earlier this year. Photo by David Rullo.

Last week’s two “Coffee and Conversation” events sponsored by the Jewish Federation of Greater Pittsburgh’s Community Relations Council were a study in contrast.

A March 24 town hall-style featured congressional hopeful Jerry Dickinson, a constitutional law professor at the University of Pittsburgh. He is competing against two other Democratic frontrunners, Steve Irwin and Summer Lee, as well as candidates William Parker and Jeff Woodard.

Much of the district is represented by Mike Doyle, who has served as a congressman since 1995 in the 18th district. The new 12th district was redrawn after the 2020 U.S. Census and is comprised of the city of Pittsburgh as well as some eastern and southern suburbs, including parts of Westmoreland County.

The question-and-answer session was held at Dickinson’s campaign headquarters on the second floor of a nondescript building on Murray Avenue. Irwin’s March 23 town hall meeting, in contrast, was held at his headquarters at an East Liberty address that appears primed to house the region’s next hipster restaurant when the campaign ends.

While several recognizable faces — including some Democratic Party insiders — were in the audience at Irwin’s town hall, Dickinson’s was filled with people anxious to learn more about a candidate with whom they were unfamiliar.

And while Irwin spoke of a career spent in public service and politics, endorsements and experience, Dickinson spoke aspirationally, like a candidate just dipping his toe into the political waters.

In response to CRC Director Laura Cherner’s first question, “Why are you running?” Dickinson spent several minutes introducing himself to the audience.

The candidate said he was born in Pittsburgh to a Black father and white mother, both too poor to care for him as an infant. As a result, Dickinson was placed in the Allegheny County foster care system and grew up in a group home in Shaler, Pennsylvania, with 11 other children whom he considered his brothers and sisters.

The experience, he said, shaped his worldview and drove him to become what he called a “change agent.”

Dickinson, a father of two young daughters, said he is deeply concerned about the future his children will inherit and wants to work to ensure a safe, healthy and equitable world.

Asked by Cherner about gentrification and displacement in Pittsburgh, Dickinson noted that the city recently lost more than 8,000 families, according to the 2020 census. He said gentrification and the lack of access to affordable housing played a role in that exit.

Dickinson said he would work to secure a $2-3 million grant to create a “right to counsel” program, giving free legal counsel to tenants threatened with eviction. He also pointed to the importance of tax rebates and subsidies for renters.

Asked about high gas prices and inflation, Dickinson said he supported the idea of providing $100 checks to Americans, and that Congress should help state governments fill gaps where needed.

Like Irwin, Dickinson said that Iran cannot be allowed to acquire a nuclear weapon. He blamed the Trump administration for creating a problematic situation with the country.

“Iran now has, and is increasingly gaining access to, potentially nuclear weapons and uranium and all those things that give rise to very serious national security concerns,” he said.

Asked if he supports Israel’s right to exist as a Jewish, democratic state, Dickinson said, “Of course. Absolutely.”

He explained that his oldest sister is Jewish and that his nephew is a student at Hebrew University in Jerusalem.

Dickinson said that the rhetoric of the BDS movement has raised concerns about antisemitism.

“The idea of delegitimizing the state of Israel is extremely problematic and dangerous,” he said. “It gives rise, I believe, to other forms of antisemitic behavior and actions.”

The congressional hopeful fielded several questions about school policy. He said he considered it a First Amendment violation to ban books based on their ideas.

Dickinson said that critical race theory is being discussed in colleges and universities, but that he didn’t think many high school or elementary schools were using it.

“I don’t think it’s as widespread as we hear from the right,” he said. “It’s being used a bludgeon to gain an advantage against Democrats. I think that’s problematic.”

He added that teachers should have the ability to explore the theory in the classroom.

“If CRT is being taught at some school, that’s OK,” he said. “Teachers have the ability and right to teach elements of critical race theory.”

Paige Eddy, who works at the Friendship Circle, said she came to hear what Dickinson had to say about disability advocacy.
“He didn’t mention anything about that,” she said, “but I did hear a lot of other things that he said.”

Sue Berman Kress came to both the Irwin and Dickinson conversations. She said that before the town halls, she didn’t know much about the candidates. And while she hadn’t made up her mind about whom she supports, the conversations were helpful.

“I still have a learning curve before I go out to vote,” she said. “This gave me the opportunity to learn about each one.”

Cherner said the CRC was asking the candidates the same questions, which were of interest to the Jewish community.

“There are a number of issues we really want to have the opportunity to hear where the candidates stand,” she said.

The CRC will host a town hall with Summer Lee on Monday, April 4. PJC