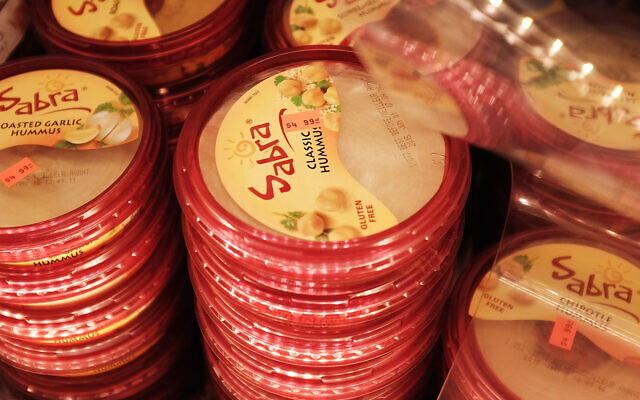 Cases of Sabra Classic Hummus are viewed on the shelf of a grocery store on April 9, 2015 in New York City. (JTA/Spencer Platt/Getty Images)

(JTA) – That hummus may not be as healthful as you want to believe, according to an environmental advocacy group’s latest research.

Laboratory tests commissioned by the Environmental Working Group found glyphosate, the chemical better known as Roundup, in 80% of conventional chickpeas and hummus tested.

Glyphosate, commonly used to kill weeds, is considered a likely human carcinogen. The company that makes Roundup agreed last month to pay more than $10 billion to settle thousands of claims that the product contributed to cancers.

Organic food producers are not allowed to apply glyphosate to their crops, but the trials did detect the chemical in several organic chickpea products, although the levels were lower than in the conventionally grown products. But the levels in Whole Foods Market’s organic-label Original Hummus exceeded the Environmental Working Group’s benchmark for safety.

For people seeking to avoid glyphosate in their food, producing one’s own hummus — an easy, no-cooking task — unfortunately offers no solution. The dry chickpeas that the Environmental Working Group tested had the highest levels of the herbicide of all the products it reviewed. PJC