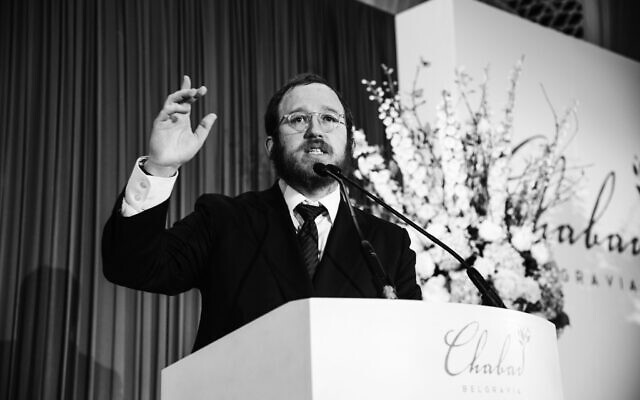 Sarah Silverman, an elderly rabbi and a golfer walked into a punchline. Technically, it was several punchlines – and a few stories – threaded together by Rabbi Mendel Kalmenson during a May 21 Zoom lecture.

Kalmenson, executive director of Chabad of Belgravia, London, and the author of “Seeds of Wisdom,” “A Time to Heal” and “Positivity Bias,” peppered his hour-long talk, hosted by Chabad of Squirrel Hill, with quips, anecdotes and interpretations while illustrating that the origins of Jewish humor date back to the Torah itself.

There are numerous examples from biblical and Talmudic writings that demonstrate the longstanding connection of Jewry to jocularity, said Kalmenson. Within the Book of Psalms, for example, an aspect of God’s persona is revealed by the verses: “He who sits in heaven laughs,” and later, “There go the ships, and Leviathan that You formed to sport with.”

It may seem incomprehensible that God would create a sea monster merely to play with, but the Babylonian Talmud examines the concept during a discussion of time management, said Kalmenson. The Talmud notes that each day consists of four parts, and that God spends each quarter engaging in a different activity, but during the final portion of each day, “He sits and makes sport with the Leviathan.”

Much can be learned from the biblical and Talmudic passages, and their description of God’s regular activities, explained the rabbi: “Playfulness, joy and laughter are not just good traits, but godly traits.”

Jewish humor encompasses this totality of experience. There are multiple episodes of persecution and sadness throughout Jewish history, and many comedians have mined those moments for a laugh. Part and parcel of Judaism, though, isn’t just laughing because it’s too hard to cry, but understanding the singular bond between God and the Jewish people even in times of crisis, Kalmenson said.

“As far back as the Talmudic times, and even biblical times for that matter, the Jewish people saw God in a very different way than did other peoples. God could be treated like a member of the family.” Humans “argued with, negotiated with, debated with, and yes, even sometimes criticized, and God does not mind.” The ultimate example is Abraham, “who negotiates and even gently, or not so gently, admonishes God in the leadup to the biblical destruction of the city of Sodom.”

As related in Genesis 18, Abraham begins bargaining with God by saying, “Will You sweep away the innocent along with the guilty?”

“I don’t know an equivalent statement of chutzpah,” said Kalmenson. “A mere mortal of flesh and blood challenging God on the notion and his track record of justice. And is Abraham demoted for this? On the contrary. This enshrines and establishes his role as the optimal Jewish leader, and the same with Moshe and many others that we see.”

God’s response to the chutzpah is telling, much in the same way that what one chooses to laugh at is revealing, said Kalmenson. “What gives God nachas is when his children take responsibility for the world.”

This give and take, “or dance,” that’s exhibited by early narratives, and even jokes, helps form the Jewish psyche.

“Jewish humor, like Jewish values, Jewish ethics and Jewish social justice, is not a modern invention but deeply rooted in our rich and enriching tradition,” said Kalmenson. “Our tradition, our faith, our community, are all a derivative of the way in which the Torah speaks, the actual stories it tells, the way in which it describes us, our leaders and even God himself.”

Jewish humor reflects “a certain way of looking at the world,” which is applicable to the days ahead, noted Kalmenson. Passover is a time of freedom, when “we were given our physical and existential freedom,” but Shavuot is something different. Celebrating the reception of the Torah marks the period when the Jewish people received their “spiritual freedom,” so in a sense, “Shavuos is the punchline of Pesach,” said Kalmenson. “Don’t forget the punchline.” PJC