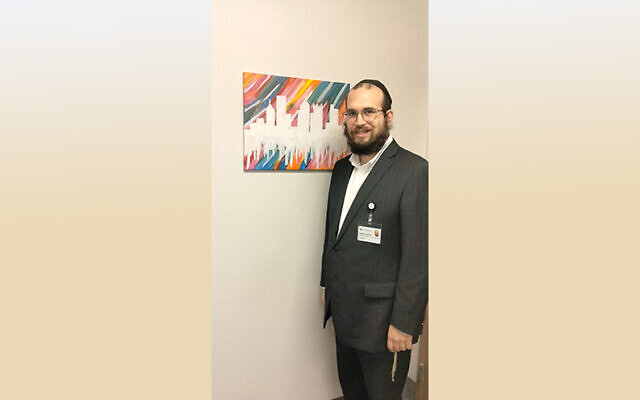 While studying to become a rabbi at yeshiva, Rabbi Shlomie Deren probably wasn’t aware that a set of strong lungs would be required.

The Pittsburgh native, who recently returned to his hometown, will test those lungs this High Holiday season as he walks a Rosh Hashanah route that includes UPMC Children’s Hospital of Pittsburgh, UPMC Magee-Women’s Hospital, UPMC Presbyterian/ Montefiore Hospital and UPMC Shadyside Hospital.

If the travel by foot isn’t enough for the rabbi, who served as the spiritual leader of Ezrath Israel Chabad in Ellenville, New York, before moving back to Pittsburgh, he also will blow the shofar during each of his visits as well as conduct brief services.

Part of his plan includes getting board certified as a hospital chaplain, a process, Deren said, that includes a year of education, as well as a certain number of volunteer hours spent with patients.

“When a Jewish person is in the hospital, primarily patients but also staff, we’re going to be available to help them with their spiritual, religious and emotional needs,” he said.

The idea, he said, came about during a conversation with Rev. Gaea Thompson, the manager of pastoral care at Presbyterian/Montefiore Hospital.

“When I mentioned I wanted to offer a Rosh Hashanah service, she jumped on the idea,” he said. “Not only that, but she emailed chaplains from the other UPMC hospitals to let them know about the idea. That got the ball rolling.”

Patients unable to attend the service can contact the chaplain on duty and request that the rabbi visit them in their room.

The Rosh Hashanah hospital visits are the start of outreach for the rabbi who plans on growing the organization, both organically and through the help of other Jewish organizations, like Bikur Cholim of Pittsburgh and its director, Nina Butler.

“I’ve been working with her, sending people to her; she’s been sending people to me,” he said. “We’re working together to let people that are coming from out of town know what’s available. If you’re in the hospital and you need help, we’ll do whatever we can to meet your needs.”

Butler, Deren said, has helped him spread the word beyond the UPMC hospitals.

“She mentioned that she knew the names of some Jewish patients at West Penn, so I contacted them and added them to the list,” he said.

“Growing up, I always was inspired by the spirit of chesed (kindness) and caring I saw in the Pittsburgh Jewish community,” Deren said. “I find a lot of meaning and support and comfort in the teachings of Judaism. When people are in the hospital, that’s the time they need that support. I’m excited to share what Judaism has to offer in a way I’m sure will be appreciated by people.”

He plans on continuing his chaplain training after the High Holidays and expanding the reach of Chabad of the Hospitals.

Those interested in scheduling an in-person visit with Deren can do so by emailing him at rabbi@chabadofthehospitals.com. PJC