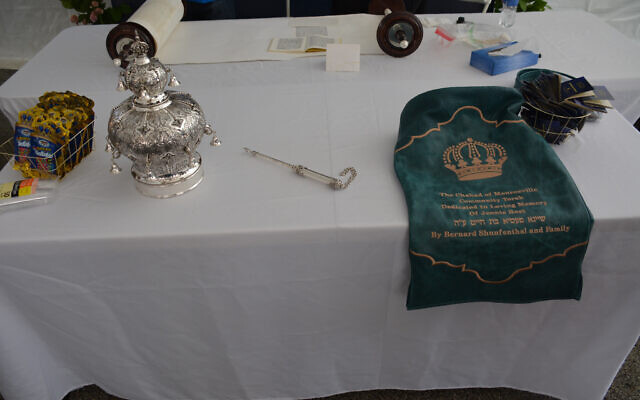 Chabad of Monroeville completed a new Torah on August 29. Photo by Yehuda Welon.

Rabbi Mendy Schapiro hopes the completion of a new Sefer Torah at the Chabad Jewish Center of Monroeville will lead to centuries of continued Jewish community in Pittsburgh’s eastern suburbs.

“You always hear about Torahs — they say ‘This Torah is 150 years old’ — well, this is the beginning of the next few hundred years,” Schapiro told the Chronicle at an event celebrating the Torah’s completion. “This is historic and many people in the community want to be a part of it.” 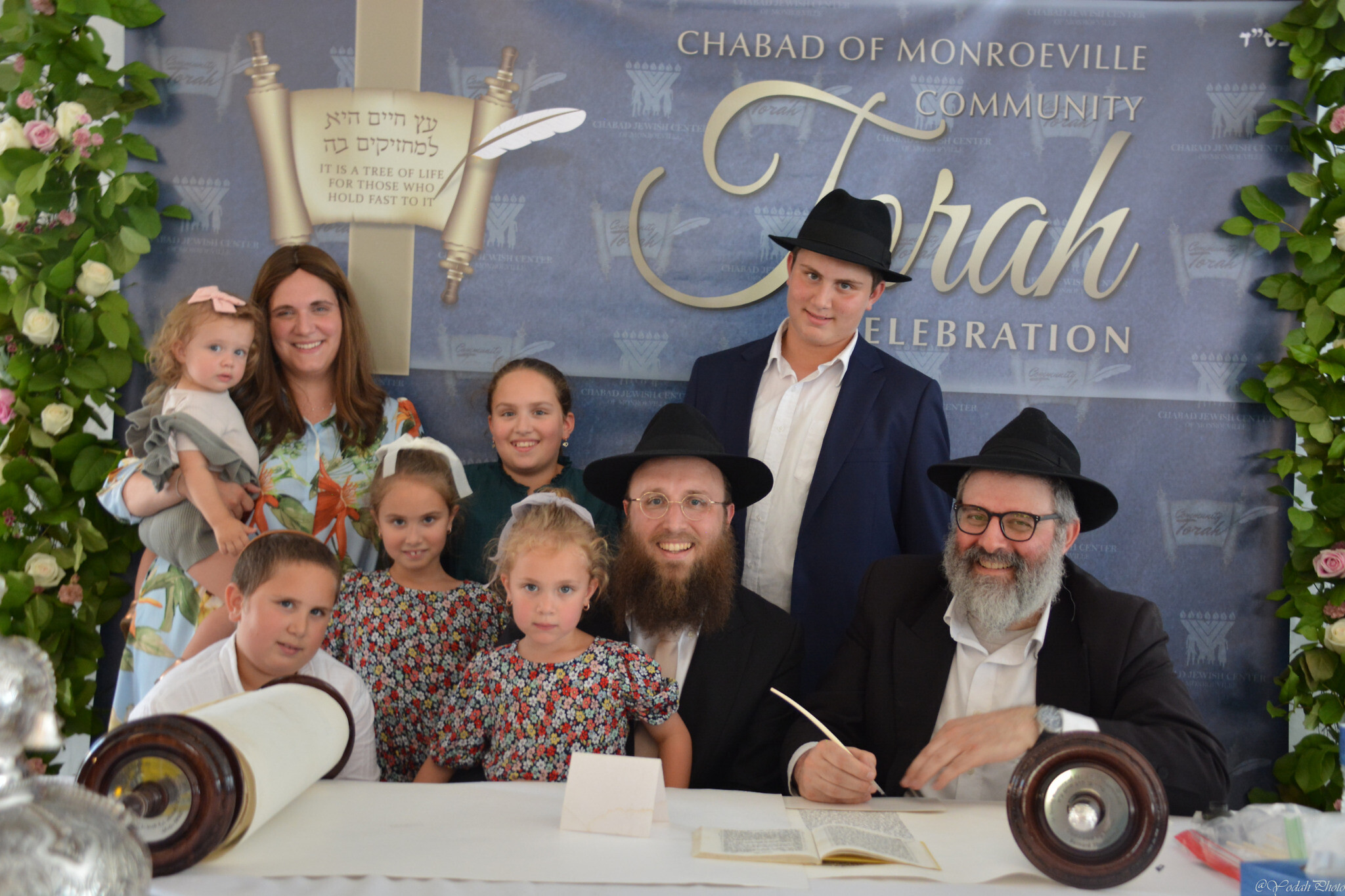 For the last 12 years or so, the Chabad Center had to borrow Torahs for its services. Several months ago, during a service held outdoors because of the pandemic, Schapiro mentioned to those in attendance that the Torah they were currently using would have to be returned and he hoped to borrow another soon.

“Someone said, ‘Hold on — we don’t have a Torah of our own?’” Schapiro recalled. “That started the process.”

A fundraising effort got underway, and Schapiro contacted a scribe in Israel who was in the beginning stages of writing a new scroll for which he did not yet have a buyer. A “shidach” was made.

“It worked out that we’d be able to have it before the holidays,” Schapiro said. “There’s no better time than now.”

The new scroll actually required the services of three scribes. The first, in Israel, inked the scroll and sent it to New York, where a second scribe completed several manual and computer checks and placed the scroll on its atzei chayim, or rollers. And the Torah was completed in a ceremony on Sunday, Aug. 29, a 90-degree day with near 100% humidity. Local scribe Rabbi David Lipschitz wrote the last several lines beneath a tent with members of the community who helped fund the project.

Lipschitz said there are several different possible script styles for Torahs and that all three scribes involved in the Chabad Jewish Center’s new Torah worked in the same style.

While the new Torah was completed in less than a year, Lipschitz said it’s not uncommon for the process to take 12 months.

Schapiro said it is a mitzvah for everyone to write their own Torah.These days the ways to fufill this mitzvah is to participate in the writing of a new Torah. He noted that many in the Chabad community contributed to the creation of the new scroll, but that both the Shunfenthal and Rubin families were the primary funders, in memory of Jennie Roet, grandmother to the Shunfenthal family and Leslie G. Rubin, wife/mother to the Rubin family.

Vandergrift resident Susan Eisenman said participating in the creation of the Torah was important to her as a way to celebrate her mother. 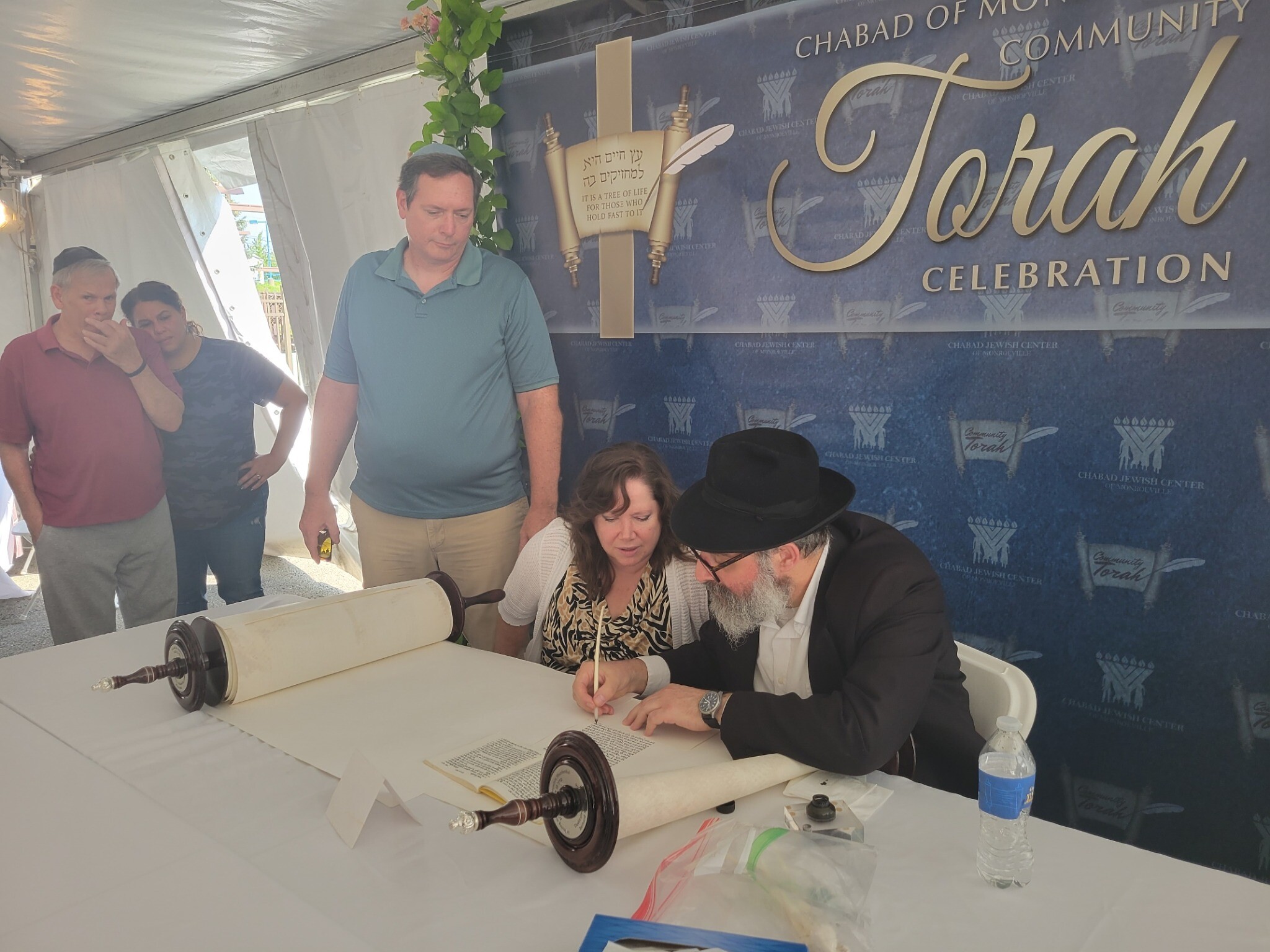 Susan Eisenman sits with local scribe Rabbi Dovid Lipschitz. She contributed to the Torah’s creation in honor of her mother. Photo by David Rullo.

“She was here from the beginning,” Eisenman said. “It was very important to contribute to something that was meaningful, and this is very special. I feel that it was an honor to be a part of this.” PJC