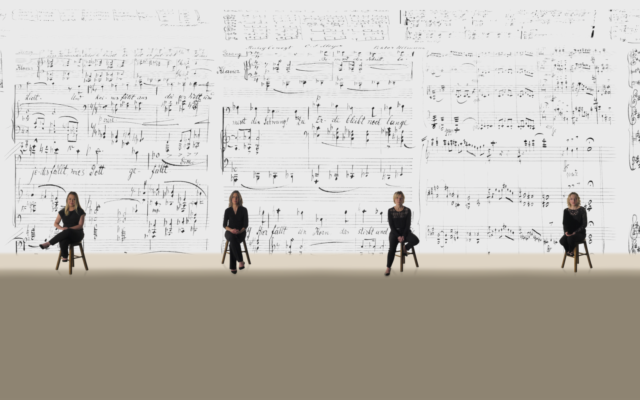 Clarion Quartet members pose in a still from 'By the Waters of Babylon.' Image courtesy of Kristen Lauth Shaeffer and Andrew Halasz

Pittsburgh filmmaker and media artist Andrew Halasz first learned of the Clarion Quartet and its mission to publicly share the music of silenced Holocaust composers in 2017. At the time, he and his creative partner Kristen Lauth Shaeffer had begun dabbling in 360-degree immersive video, a form of virtual reality where users control the experience by looking in different directions. Halasz was captivated by the present-day musicians, as well as the legacy of the composers who continued to create music during the Holocaust.

For the late composers to create amid horror, and for the Clarion Quartet to play these pieces decades later, was an act of “defiance,” Halasz said.

The filmmakers had looked for the right story to pair with the immersive technology, and when Halasz described the Clarion Quartet’s efforts to keep formerly banned music alive it seemed like a perfect fit, Shaeffer said: On the one hand, there were these modern musicians playing once suppressed pieces and, on the other hand, there were the early and mid-20th century composers striving to create art in the darkest of places.

“We thought how incredible it would be to be placed in the center of this,” she said.

Members of the Clarion Quartet had already performed a concert in 2016 in the Theresienstadt concentration camp in the Czech Republic. With footage from that show, Halasz and Shaeffer expanded out and up. They worked with a European filmmaker who digitized elements of Theresienstadt, its barracks and gathering spaces. Halasz and Shaeffer then recorded the Clarion Quartet playing “Entartete Musik,” or pieces the Nazi regime had considered degenerate, inside the Pump House, a Munhall-based location chosen due to its evocative architecture and sound quality, Halasz said.

With the amalgamated footage the filmmakers created “By the Waters of Babylon.” The award-winning 18-minute documentary experience enables viewers, either through virtual reality equipment or reliance on a screen, to watch the Clarion Quartet perform formerly suppressed works and describe the story of Viktor Ullman, an oppressed Austrian composer who eventually died at the Auschwitz concentration camp.

The film “invites viewers to meet at the intersection of past and present, with banned music of the Holocaust, its present-day interpretation, and the latest in immersive technology,” said Lauren Bairnsfather, director of the Holocaust Center of Pittsburgh.

Neither Halasz nor Shaeffer are Jewish and, before “By the Waters of Babylon,” neither had worked on a Holocaust-related story. But with help from the Holocaust Center, the filmmakers learned about a horrific historical period and the sensitivities required when approaching it as a genre, the duo explained.

There’s no denying the fact that the documentary “is a Jewish story, how could it not be,” but the work has a resonance beyond faith or religious practice, Halasz said.

“What fascinated me was about being an artist and how practicing it is transformative, or provides hope, or is worth saving,” he said. The Nazi regime tried to quash various forms of art, so when people come out to see this work or hear the music it’s “an act of defiance.”

“By the Waters of Babylon” has received several awards, including the #VIFFImmersed Best in Documentary Award at the 2020 Vancouver International Film Festival, the 2020 Best of Conference in New Media Award by the University Film and Video Association, and was an Official Selection at the 2020 Doc Edge Film Festival.

The multisensory documentary will have four screenings at the Buhl Planetarium at Carnegie Science Center. The showings are a collaboration between the filmmakers, the Holocaust Center of Pittsburgh, Chatham University and Point Park University. The two May 18 screenings will include a VIP reception with takeaway gifts for attendees and a talkback with the filmmakers and the Clarion Quartet. Tickets are $36. The two showings on May 31 will include a limited number of free seats for Holocaust survivors and degree-seeking students in the Pittsburgh area with a valid student ID. Tickets are $15. Advance registration is required. PJC