When cousins Danny and Bruce Greenfield were growing up in Brownsville, the Temple Ohave Israel cemetery wasn’t much to write home about.

“I keep telling people, my cousin Bruce lived in that white house [at the entrance of the cemetery]. I don’t think we even knew it was here,” Danny Greenfield said, noting that the Ohave Israel cemetery was mostly unmarked and deep within a larger graveyard.

To celebrate the 115th anniversary of Temple Ohave Israel, and to join in the rededication of the congregation’s cemetery, the cousins returned to their hometown — Danny from Pittsburgh and Bruce from Boston — on June 19 for the reunion of the Brownsville Jewish community.

Held at Brownsville’s Nemacolin Castle, the reunion featured several speakers who were involved in organizing the celebration and rededication of the cemetery, from the borough’s former Mayor Norma Ryan, to Ray Klein, a former Ohave Israel congregant.

The Brownsville Jewish community traces its roots to the late 1800s, when a wave of Jewish immigrants settled in the borough. They chartered Ohave Israel around 1907 and “met in private homes until 1916, when its members dedicated a wood frame synagogue on Arch Street between High Street and Prospect Street,” according to the Jewish Encyclopedia of Western Pennsylvania, a project of the Rauh Jewish Archives at the Heinz History Center. “The building was destroyed in a fire two years later. The congregation broke ground on a second synagogue at 210 2nd Street in Brownsville in 1919 and dedicated the building the following year.”

These days, there are few signs of Ohave Israel in Brownsville. The synagogue was sold in 1979 to the United Citizens Group of Southwestern PA. The building now houses Elmo’s, a supplies store that specializes in computers, guns and coffee.

The former “Brownsville shul” was added to the National Register of Historic Places in 2016, but documentation on the borough’s Jewish community was sparse — until recently.

Eric Lidji, the director of the Rauh Jewish Archives, “was collecting data on Jewish communities in the area … it turned out, there wasn’t much on Brownsville,” Greenfield said. Lidji contacted Greenfield to find the borough’s Jewish cemetery and things snowballed from there. 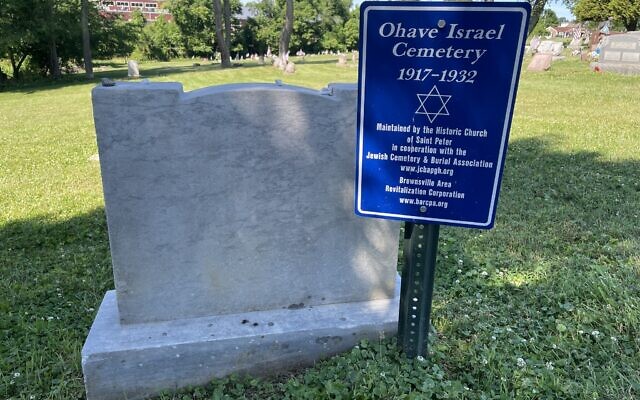 Sign marking the rededication of the Ohave Israel Cemetery
(Photo by Ethan Beck)
The two reached out to Barry Rudel, executive director of the Jewish Cemetery and Burial Association of Greater Pittsburgh. The JCBA took responsibility for the cemetery and helped renew its grounds. In the meantime, Lidji continued to archive and research the area with help from Ray Klein.

“All of a sudden, people started coming out of the woodwork and really coming together to make this record happen,” Lidji said. “We now have this incredible list of about 650 Jewish people who we know lived in Brownsville.”

One of the remaining mysteries of Ohave Israel is the cemetery’s small size. It was used from 1917 until 1932 and only has eight gravestones.

“The bulk of the Brownsville Jews were not buried there,” Rudel explained, adding that many ended up in neighboring communities such as McKeesport and Uniontown.

Those small-town Jewish communities often were tighter because of their size, Lidji noted.

“One of the things that I’ve noticed about these small Jewish communities is they often did not have the luxury of splitting into groups,” Lidji said. “They all had to figure out a way to get together, and that meant making compromises so they could fit as many people into their organization as possible.”

That tightly-knit dynamic was on full display Sunday, as about 40 people traveled from Pittsburgh, Boston, Washington, D.C., and other locales to celebrate their Brownsville roots. As ex-Brownsville mayor Ryan said at the reunion, there’s always a need to polish and “add memories to the memory bank.”

While the Brownsville Jewish community has diminished –– only one Jewish man, Jerry Moskovitz, is known to remain in the borough –– the reminiscences are still strong.

“The point of all this is that we can never bring back this actual community,” Lidji said. “The period of time for Brownsville Jews came and went. But what we can do is revive the memory.” PJC