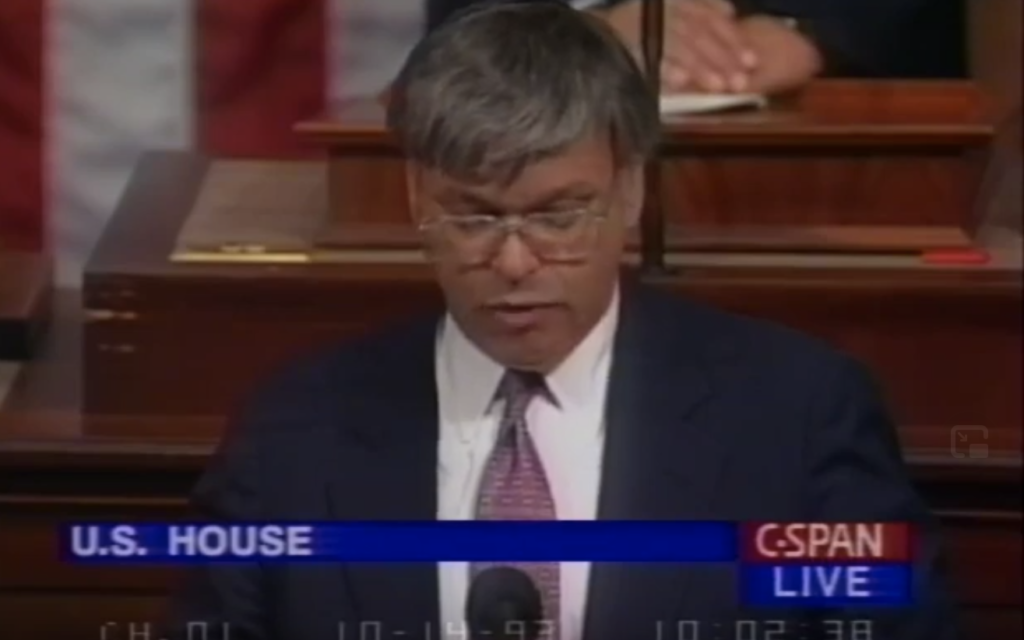 Rabbi Alvin Berkun of Tree of Life Congregation, Pittsburgh, Oct. 14, 1993, leads the House of Representatives in prayer. (Screenshot from C-SPAN)

More than 400 rabbis have led opening prayers in Congress, and Howard Mortman can tell you about them all. In the dead of night as his family slept, Mortman pored over congressional records, looking up every single prayer ever given in the House and Senate to find the ones led by rabbis. Mortman’s quest took six years.

“This is going to sound weird, [but] it really was for fun,” said Mortman, 54, a McLean, Virigina resident. “Everybody needs a hobby. Some people do stamp collecting. Others do coin collecting. I track rabbis who pray in Congress.”

In October, Mortman published “When Rabbis Bless Congress: The Great American Story of Jewish Prayers on Capitol Hill.” Since 1789, the House and Senate have employed a chaplain to begin each day’s proceedings with a prayer. Occasionally, a guest chaplain fills in. And 635 times, Mortman said, those guest prayers have been led by a rabbi.

“When Rabbis Bless Congress” tells who these rabbis were and, with a captive audience, what they had to say to the nation’s lawmakers.

No rabbi was asked to speak in Congress until the eve of the Civil War. And he said no. Rabbi Solomon Lansburgh of Washington Hebrew Congregation was invited by the speaker of the House, but the rabbi, a native German speaker, didn’t believe he was fluent enough in English to address Congress.

So Lansburgh recommended Rabbi Morris Jacob Raphall, of New York. On Feb. 1, 1860, when the House was choosing a speaker, he stood before the representatives and addressed God: “Thou who makest peace in Thy high heavens, direct their minds this day that they may, with one consent, choose the man who, without fear and without favor is to preside over their assembly.”

Newspapers took notice of the historical first. Raphall’s prayer was the lead story in the Alexandria Gazette on Feb. 9, 1860, and was reported in the New York Times and Philadelphia Press. Mortman quotes historian Jonathan Sarna, who wrote: “The Churchman, unofficial organ of the Episcopal Church, responded ‘with extreme sorrow, and almost disgust’ to the rabbi’s prayer. It described his appearance in Congress as ‘no less than the official rejection of Christianity by the Legislature of the country.”

As more and more rabbis took part in the tradition, the practice became less controversial.

A century later, Rabbi Joachim Prinz spoke at the 1963 March on Washington, right before the Rev. Martin Luther King Jr. gave his “I Have a Dream” speech. Two years later, Prinz was back as a Senate guest chaplain. On May 7, 1965, he took note of Israel’s 17th Independence Day, a week away.

“May all the peoples acknowledge Israel’s right to be, to work, and to create, knowing that there is room enough for Arabs and Jews to live together in harmony,” Prinz said.

Rabbi Alvin Berkun, who led Tree of Life Congregation in Pittsburgh for 30 years, was given the honor of leading congressional prayer twice: In 1991, he led a prayer in the Senate at the invitation of Pennsylvania Sen. Arlen Specter, and in 1993, he led the House of Representatives in prayer at the invitation of Rep. William Coyne.

The experiences were “powerful,” Berkun told the Chronicle, speaking from his home in Florida.

“I’m a first generation American,” he said, “and from that perspective, it was moving that I could be taking part in government in the United States.”

In his book, Mortman groups together rabbis with similar backgrounds. Six were Auschwitz survivors, including Rabbi Laszlo Berkowitz, founding rabbi of Temple Rodef Shalom in Falls Church, where which Mortman is a member.

Fifty-five served in the military, such as Rabbi Arnold Resnicoff, of Washington. He was part of a group of veterans who advocated for creating the Vietnam Veterans Memorial. Resnicoff led the closing prayer at the monument’s unveiling in 1982 and has led opening prayer in Congress 17 times, the most of any rabbi.

Only 14 of the 441 rabbis who prayed with Congress were women. The first was Sally Priesand, the first woman ordained as a rabbi in the United States. She offered a prayer in the House on Oct. 23, 1973, the same day the first article to impeach President Richard Nixon was offered.

“Once again, we consecrate ourselves to the task of building a better world,” Priesand said. “Those who sit here have been granted positions of authority by their fellow citizens. May they use their power wisely and for the good of all.”

Mortman didn’t plan to write a book at first. Initially, it was curiosity that drove him. He is director for communications at C-SPAN, which televises raw footage of the Senate and House floors.

“I basically watch C-SPAN for a living,” he said.

Over the years, Mortman developed a fascination with the opening prayer.

“It looks like nothing else that happens throughout the day,” he said. “There’s no partisan rancor. There’s no arguing. It’s a straightforward kind of a unifying moment.”

Mortman said he took notice whenever a rabbi led prayer. In 2014, he started keeping track on a spreadsheet, like a sports fanatic tracking player stats. He documented their names, synagogues, hometowns and other details. His curiosity eventually led him to delve into the history of the tradition. He searched through C-Span’s video archive, which dates back to 1979, and looked through Congressional Records, the official record of the proceedings and debates of Congress. The Library of Congress has made a vast majority of these records available to search online for free, which Mortman said enabled him to conduct research from his computer at home.

Mortman said he always dreamed of writing a book, but he never knew on what. But after he saw that very little had been written about the history of prayer in Congress, it dawned on him that this was the book he was meant to write.

“The exciting part was doing something that no one’s ever done before. The frightening part was, I hope I get it right. I’m not a professional academic. I’m not a professional historian. And I am not a rabbi,” Mortman said. “So I wanted to make sure I get both the history right and the Jewish part of it right, and knowing that, ultimately, it’s my record keeping that tells the story.”

Mortman said he aimed appeal to any history lover, Jews and non-Jews alike. Studying this history can help people better understand the intersection of religion and government.

“In my opinion, this is a part of Congress that just deserves more attention and interest,” Mortman said. “This book is the story of hundreds of rabbis who have opened Congress with prayer, stories that have never been told before. Rabbis who have never gotten the attention I think they deserve.” PJC

Eric Schucht is a writer for the Washington Jewish Week, where this first appeared.