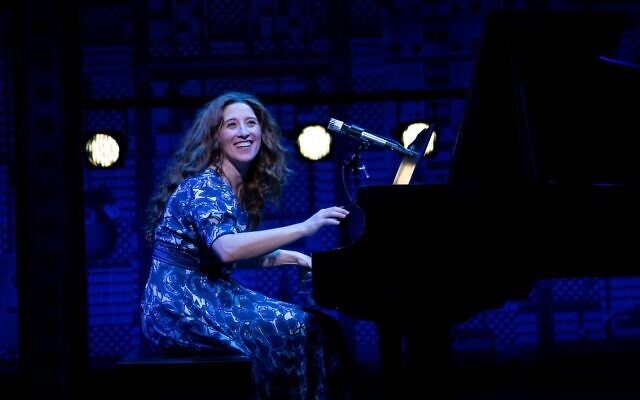 “Beautiful: The Carole King Musical” can be seen March 18-20. Photo by Joan Marcus.

The future lead producer of “Beautiful: The Carole King Musical” — which runs at the Benedum Center March 18-20 — grew up in the Bronx and attended the High School of Music and Art for artistically gifted children. He remembers taking a 45-minute bus ride from his neighborhood to the school in Manhattan.

“I met dozens of people like me who loved music, who understood and were responsive to theater and art,” he recalled. “I said, ‘I’m not alone in the world.’”

Blake graduated from City College and initially tried to make it as an actor.

Blake credits a girlfriend’s mother with suggesting he try his hand directing the drama group at the West End synagogue. While he loved the people in that group, the relationships outperformed the talent.

After a stint teaching, Blake spent time at the American Conservatory Theater in San Francisco under the tutelage of William Ball.

Despite enjoying his role as the head of the acting program at ACT, directing shows and having the opportunity to work with Pulitzer Prize winners, salary was an issue — he was earning $345 a week in the costly California city. Seeking a larger paycheck, he made the jump to television.

It was a therapist who helped him realize that was a bad decision.

The move proved beneficial. He next became the executive producer at the St. Louis MUNY, the largest outdoor musical theater in America. There, he ushered in what the St. Louis Post-Dispatch called the theater’s “2nd Golden Age.” During his 22 years with the MUNY, typically more than 10,000 people attended its productions every night.

In 2010, Blake was asked by the president of EMI Music Publishing to create a musical out of Carole King’s catalog.

Blake’s role as the producer of “Beautiful” was similar to what producers do with any new musical, he said.

“You take a piece of paper, you write on the top of it ‘Beautiful’ and then you fill in all the spaces below: music by, direction by, book by, scenery by, accountancy by, advertising by … all those things that one person fills.”

Blake had one line on his blank page filled when starting to produce “Beautiful” — the music. When he met with King, she only had one request: She didn’t want to be involved.

Blake said the musical was simply too emotional for King, but after several of her friends saw the show and relayed how good it was, she decided to attend — in disguise.

“She put funny glasses on, put a wig on and sat in the seat and cried half the night,” Blake said. “Afterward, she went on stage. The place went nuts. Somehow, that got recorded and went on the internet. From that moment on, we became not just a hit but a big fat hit because Carole King saw it and loved it.”

And while the producer acknowledges the centrality of the music to the show, he said a good musical is more than just music.

Blake credits Douglas McGrath with crafting an exceptional book that went through several drafts and, despite several emotional moments, is also funny.

“It says a lot about women and women in the world at that time,” Blake said. “It’s extraordinary. And that’s Doug. That’s the great luck. I had the great book writer.”

The producer acknowledged that theater has changed during his career, and has become more expensive. When “Fiddler on the Roof” was first staged in 1964 it cost $350,000 to produce; its latest revival topped out at $15 million.

Blake bears no ill will toward the increased cost of the art he loves.

“Everyone’s trying to make a living,” he said. “All those people below the name of the production I told you about, they all want to make a living and life is expensive, particularly in New York.”

Asked what makes a show successful, Blake has a simple answer.

“If the show has no laughs in it, it’s not going to work,” he said. “Even ‘Oedipus’ has a humor section in it, and ‘Hamlet.’ If they don’t have laughs, you know it’s not being done right, and pretentious.” PJC