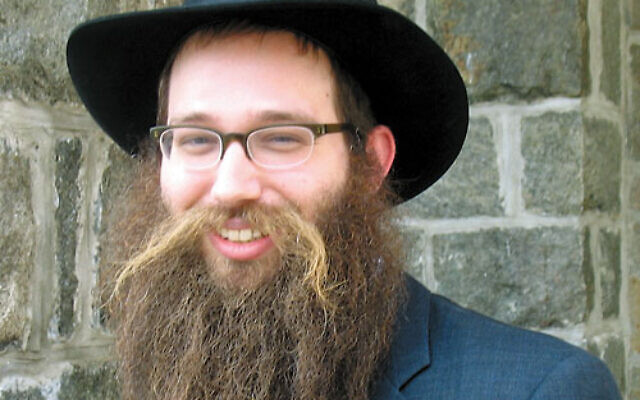 Yehoshua November appreciates how hard it is to write a good poem.

“There’s something magical about poetry,” he said. “You do what you can to make the poem work. There’s no formula. You write one good poem, and if you could replicate that it would be easy to write a lot of good ones, but you can’t. When you start a new poem, it always feels like you’re starting from scratch and you don’t know anything.”

November knows more than a little about poetry, even if he thinks its elements remain ethereal. He teaches writing at Rutgers University and Touro College and has published two collections of poetry, “God’s Optimism” and “Two Worlds Exist.” He’s a winner of the Main Street Rag Poetry Book Award and a finalist for the Los Angeles Times Book Prize in Poetry, the National Jewish Book Award, the Paterson Poetry Prize and the Autumn House Poetry Prize.

The writer’s poetry has been embraced by the wider writing community despite its decidedly non-mainstream focus: his life as a Chasidic Jew.

“As far as influences along those lines, you don’t really have many,” November said. “You are kind of dipping into two streams. You go to the secular poets for their style, craft and technique and then, in my case, you go to Chasidic teachings for content and theology. Then you try to use the techniques of contemporary poetry to express Chasidic teachings or how Chasidic teachings play out in your life.”

Finding a balance between the two hasn’t always been easy for November, who spent his high school years at Hillel Academy in Pittsburgh before moving to Rochester, New York, to attend a yeshiva. The teenager soon moved back to Pittsburgh, though, and graduated from Allderdice High School.

After receiving his undergraduate degree from Binghamton University, November earned his MFA from the University of Pittsburgh. But writing was almost the road not taken.

While studying at Pitt, November became interested in Chasidic teachings just as he was turned off by the literary community.

“It just wasn’t as warm as my undergraduate experience,” he said. “At the same time, I was really getting interested in mysticism.”

The writer put down his pen and decided to concentrate on Chasidism, studying at a yeshiva in Morristown, New Jersey. After two years without writing a single poem — or even reading a book in English — November was at a crossroads.

“My wife was pregnant with our second child, and I had to decide what to do as a career,” he said.

He considered becoming a rabbi but was urged by several mentors at the yeshiva to become a writer and professor, pointing to the positive influence he could have on Jewish students.

“It was good advice because before that point I always saw Judaism as one world and literature in secular life as another,” November said. “As a young person I always saw everything as binary, so it was refreshing to realize that Judaism is large enough to encompass a person who could be a poet, and that those two ambitions — to live a spiritual life and to be a poet or a professor in university — could be mutually informative.”

Though he studied Kabbalah and Jewish mysticism, which can often be abstruse, November prefers his poetry to be easily understood by the reader.

The Pittsburgh Jewish Chronicle has selected November as the judge for its first poetry contest on the theme of “solidarity.” Readers are invited to submit a poem in two categories — teens or adults — by Dec. 25. The winning poem in each category will be published in the paper’s Jan. 15 issue and the winning writers each will receive a $54 gift card to Pinsker’s Books and Judaica, supplied by an anonymous donor.

November said he’s excited to read the entries and select a winner. “I’m interested in reading what’s good coming out of my hometown.” PJC