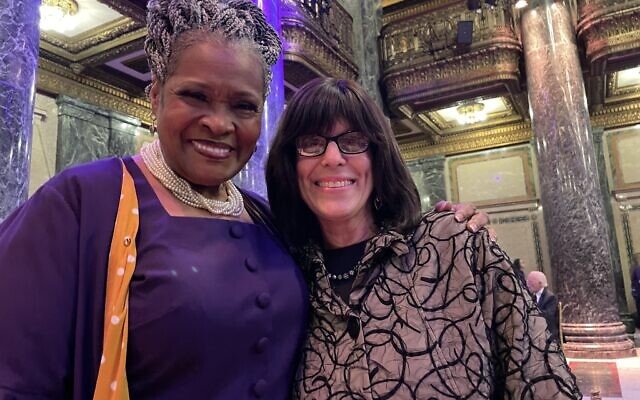 Have you heard the one about the Hasidic rabbi who offered the prayer at a Catholic college to mark the inauguration of its Black Protestant female president?

No, it’s not the set-up for a joke. Rather, it’s the true story of a deep friendship — the type that’s common in Pittsburgh, where close neighborhoods, large college communities and a willingness to accept others create an opportunity for valued connections between those who might otherwise be considered odd bedfellows.

On March 25, Kathy W. Humphrey was inaugurated as the 11th president of Carlow University, a private Catholic university founded by the Sisters of Mercy. Chabad House on Campus Rabbi Shmuel Weinstein gave the benediction during the ceremony.

Weinstein and his wife, Sara, met Humphrey more than 10 years ago when she was hired as dean of students at the University of Pittsburgh; she later became a vice chancellor there.

“We invited her to Chabad House for a Shabbos meal,” Sara Weinstein recalled. “It’s very memorable because it was a Friday night in February, and there was a snowstorm. She ended up having to walk through the snow to our home after parking.”

That story is emblematic of Humphrey and speaks to her dedication to the students she represents, Sara Weinstein added.

Perhaps more surprising than the budding friendship that began that night was the question Humphrey asked when leaving: “Could I have a Shabbos meal at my house and host Chabad and students? Would you come?”

In fact, Humphrey said that she has hosted many Shabbat dinners in the years following that initial meal at the Weinsteins and has enjoyed every one of them. 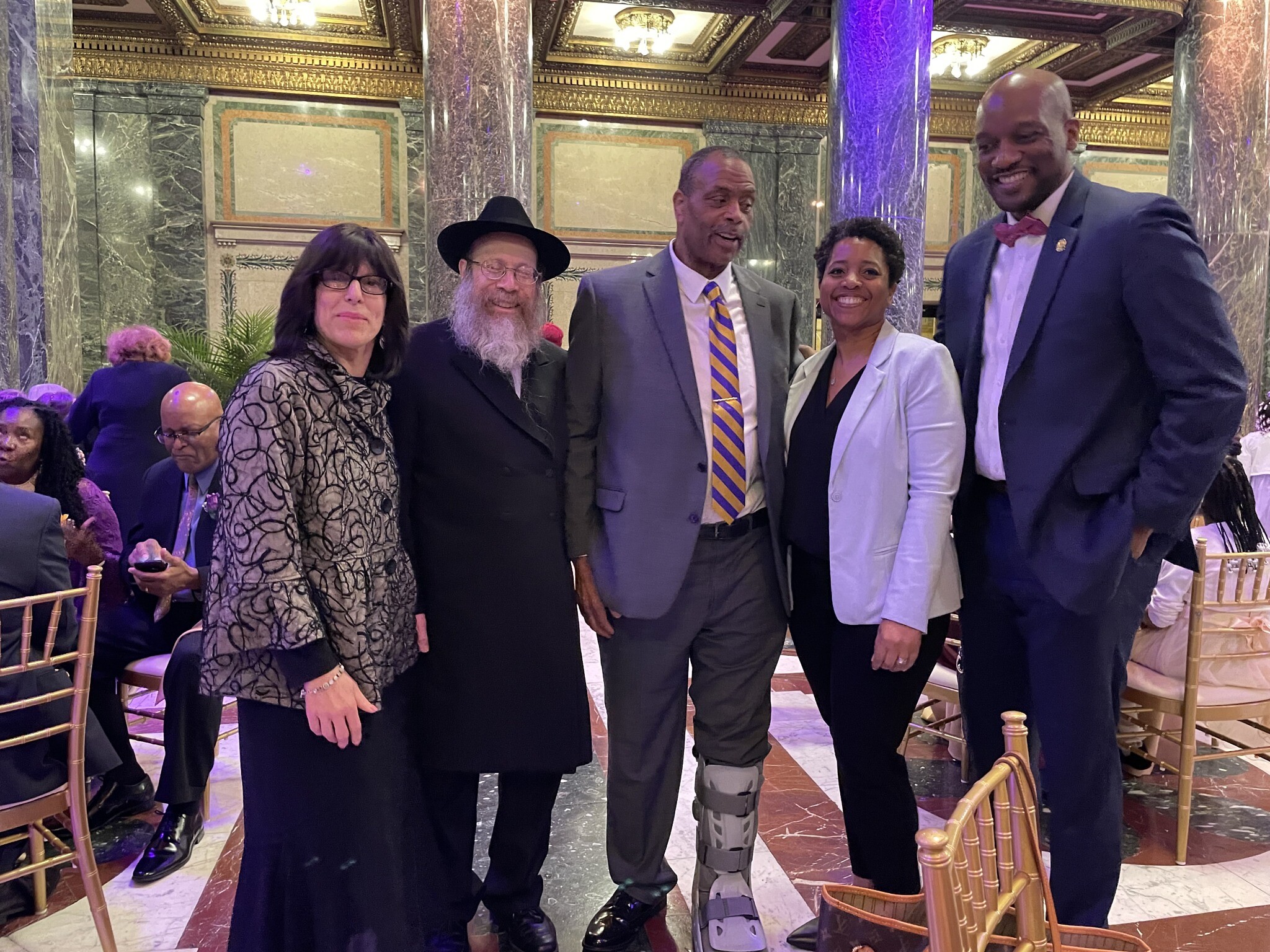 “To the point where I know the melodies,” she said. “That’s because of the connection, the relationship and how important it is. My life has been enhanced, and my commitment to being a voice in places where they are not is something I continue to be engaged with because I’ve learned so much. The only way to be a voice is to stand when others cannot speak.”

The bond between the Weinsteins and Humphrey was further strengthened when the Chabad couple coordinated a trip to Israel in 2018 for Pitt’s administration. It was a journey that proved meaningful for Humphrey.

“It’s the seat of all our religions,” she said. “We had Shabbat dinner at a woman’s home, and it was Ramadan. I could hear people praying. There was a hum around the city of prayer. It was the most amazing experience I’ve ever had in my life, to see that convergence of faith.”

The college president said that while she didn’t understand the language, she knew that God heard every word.

Shmuel Weinstein called Humphrey a “pacesetter” during her time at Pitt, saying she encouraged people while there and worked to better understand different communities to break down stereotypes.

That attitude was on full display during Humphrey’s inauguration at Carlow University and spoke to the breadth of relationships she has built in the city. Speakers included not only Weinstein but Pittsburgh Mayor Ed Gainey, Allegheny County Executive Rich Fitzgerald, University of Pittsburgh Chancellor Patrick Gallagher, Institute of the Sisters of Mercy of the Americas President Sister Patricia McDermott and Pastor Brian Edmonds, senior pastor of Macedonia Church of Pittsburgh.
The rabbi’s remarks concluded the ceremony.

“I was the last person out of many, and that put me between people sitting in their seats and leaving for a
reception on a Friday afternoon,” the rabbi said with a laugh.

The rabbi said that he came to the stage with his short speech atop a ream of paper, which he placed on the lectern with a flourish.

Weinstein told the crowd, “‘I have a lot to say about Kathy,’” he said. “Everyone had a nervous look on their face.” The tension broke when he let the crowd in on the joke and removed the pile of paper, revealing his short, two-minute speech.
The rabbi spoke of the importance of the Torah in Jewish life and the spiritual significance of the numbers 8 and 11 in Jewish tradition — Humphrey is the university’s 11th president.

Speaking as a friend, Weinstein said during his speech: “Kathy, everyone who knows you understands that you exhibit these same traits — you love peace, and you love people.”

For Humphrey, the mix of various faiths and traditions was not unusual or even special, she said. Instead, she recalled words spoken to her by Bishop David Zubik when, asked during dinner to give grace, she remarked that she didn’t know Catholic grace.

“He said, ‘Kathy, all words go to God,’” she recalled. “That’s really where I believe I am and the very nature of where we are as a university. The greatest commandment is that we love the Lord. The second is that I love my neighbor as myself. I hope that what we’re demonstrating is just that — you don’t love your neighbor from a distance. You embrace and love your neighbor.” PJC