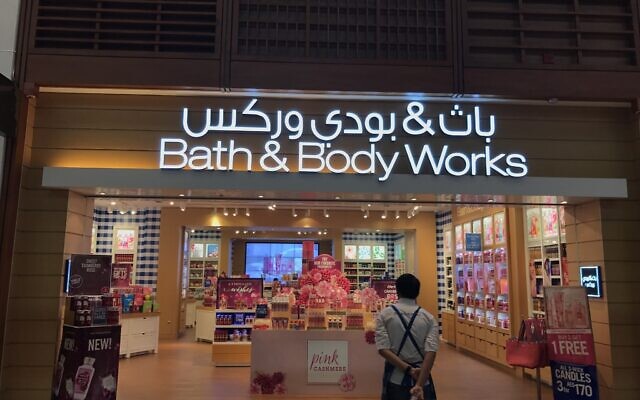 On onlooker admires Bath & Body Works at a mall in the UAE. Photo courtesy of Robin Hammer

When the historic Abraham Accord, signaling peace between Israel and the United Arab Emirates, was announced on Aug. 13, it marked not only the third time an Arab country formalized relations with Israel but the first time it happened in more than 25 years.

As much global attention as the treaty received, two Squirrel Hill residents were hardly surprised by the agreement. During their one-year stay in Abu Dhabi, Robin and Maxim Hammer had heard about dealings between Israel and the UAE and watched as the country publicly embraced an increasingly favorable view of the Jewish state. 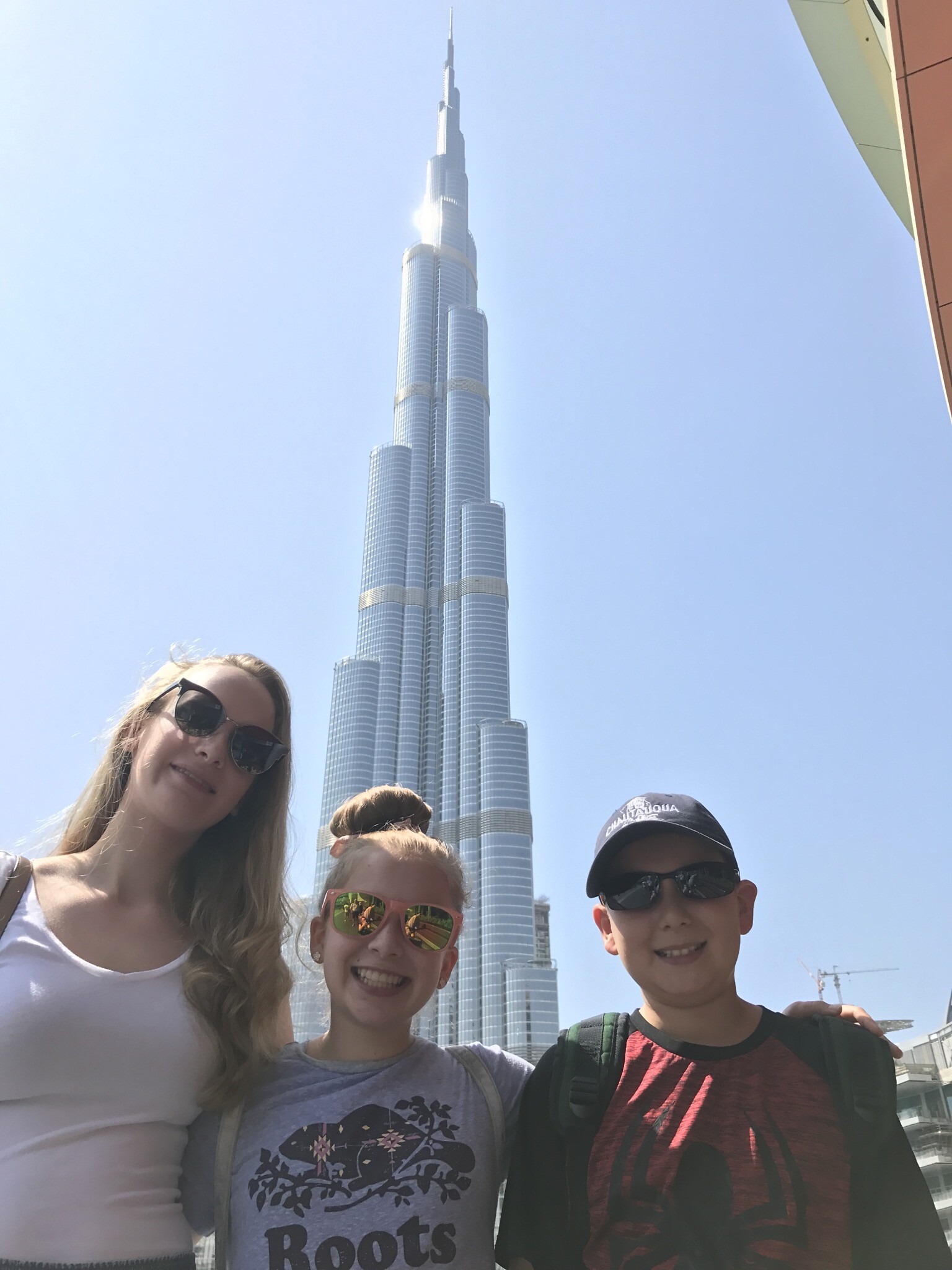 The Hammer children stand near the Burj Khalifa in Dubai, the tallest building in the world. Photo courtesy of Robin Hammer

Maxim, a UPMC neurologist who accepted a one-year position at the Cleveland Clinic Abu Dhabi hospital, recalled that shortly after he, Robin and their three children arrived in the UAE, Israeli Tal Flicker won a gold medal at the October 2017 Abu Dhabi Grand Slam judo tournament, but event organizers refused to raise the Israeli flag or play “Hatikvah,” the Israeli national anthem. One year later, however, when Israeli Sagi Muki took gold in the tournament, the Israeli flag was raised and “Hatikvah” was played.

“The UAE is a very progressive country that wants to be Western and they’re changing very rapidly,” said Maxim, who pointed to the UAE’s welcoming of the formerly forbidden Apple FaceTime app as further proof of the country’s evolution.

Given the historic nature of the Israel-UAE deal, Rabbi Jonathan Perlman, a friend of the Hammers, invited Robin and Maxim to speak virtually with members of New Light Congregation last week.

The event was less about geopolitics and more of an opportunity for members to hear how the Hammers felt as Jews during their time in the UAE, said Perlman. 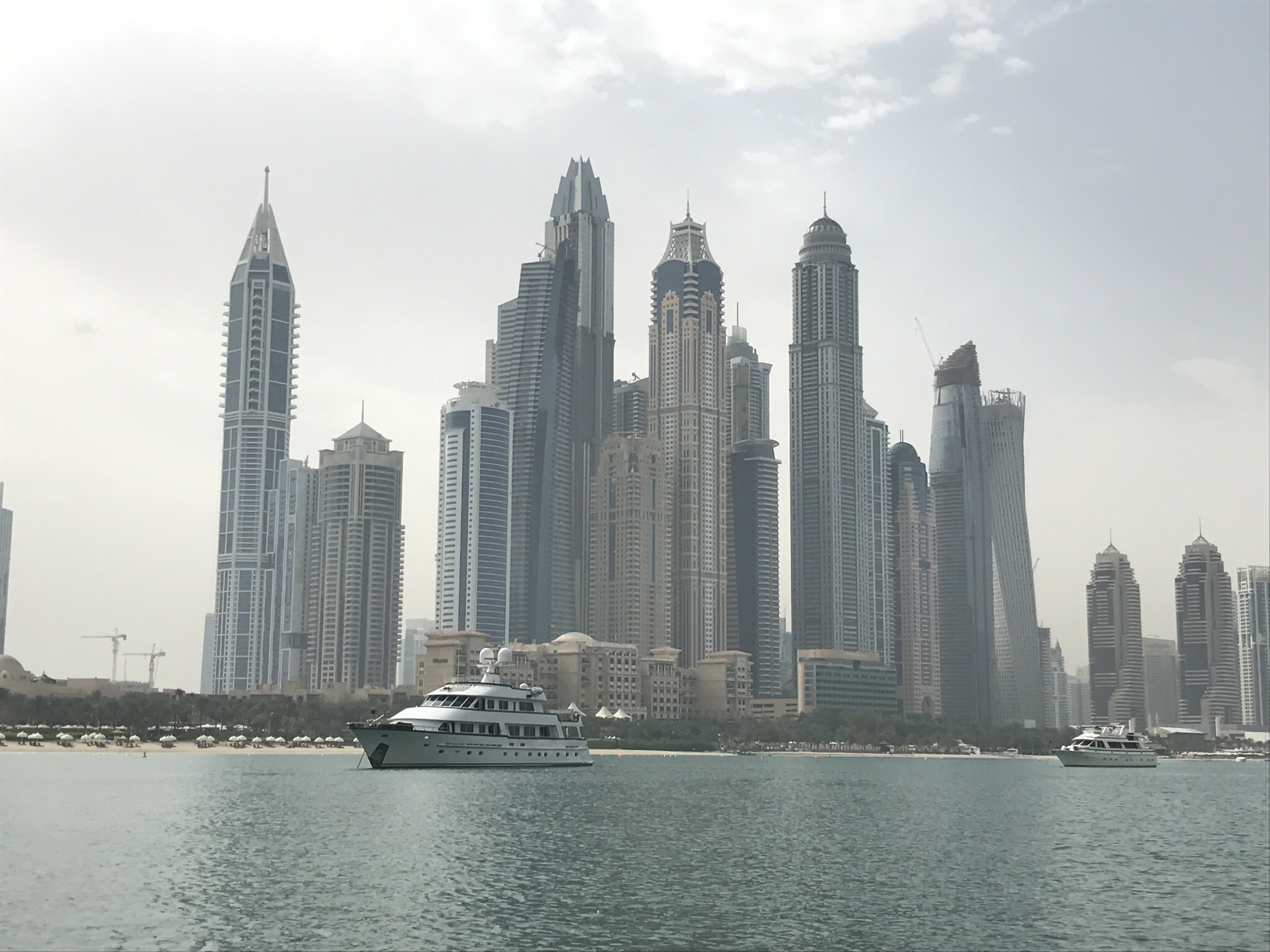 Scenes from the UAE. Photo courtesy of Robin Hammer

Speaking to people at New Light, and in private conversations, has been an opportunity to dispel certain myths, said Robin after the event: “It’s hard to explain the UAE society in the context of stereotypes we all have about Middle Eastern countries that we get from the news and a lot of films, but I think there are other countries in the region where those stereotypes are more accurate.”

In both professional and personal circles in Abu Dhabi, the Hammers found that they were well-received and easily accepted as Jews.

“There were a couple of instances when I mentioned to people that I was Jewish and no one blinked, no one was surprised. It didn’t matter,” said Maxim.

“It’s a pretty tolerant society, especially for Westerners,” said Robin. “What I try to tell everyone is that a lot of our fears were really in our own mind.” 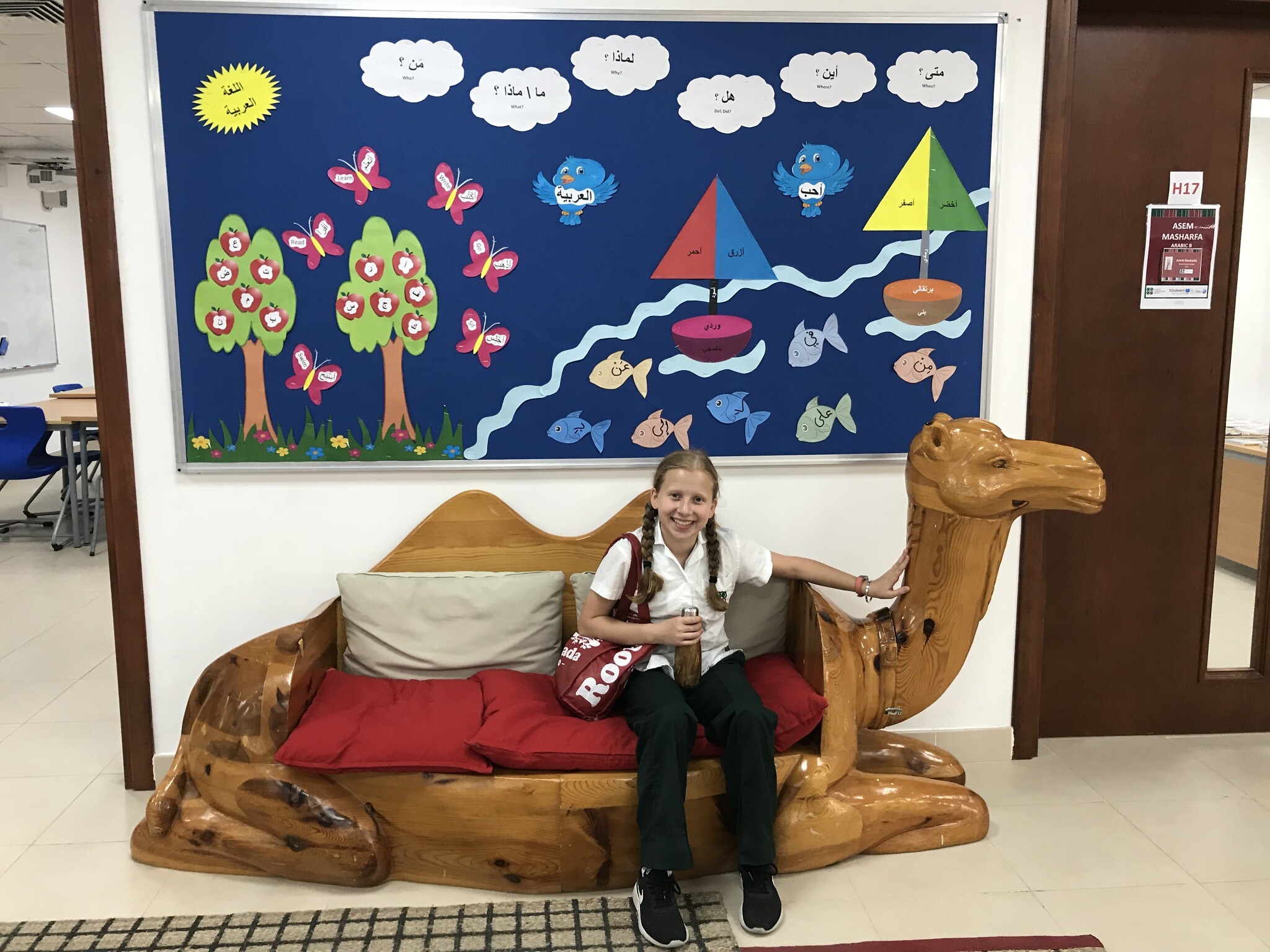 At school in Abu Dhabi. Photo courtesy of Robin Hammer

Prior to accepting the position at the Cleveland Clinic Abu Dhabi hospital, the Hammers traveled to the UAE for an interview. They decided they couldn’t pass up an opportunity to live in an Arab country, but they still felt uncertain about some things, explained Robin.

There were restrictions, like not displaying non-Muslim religious items, that caused concern, said Maxim.

“We were careful about not bringing any Jewish items to the country, but we could have, in retrospect,” he said.

Their children, who were in fifth, eighth and 11th grades at the time, had positive experiences and were culturally enriched through participating in athletics, like gymnastics or ice hockey, regional excursions and visits to local museums.

A particularly resonant moment for the family occurred at the Louvre Abu Dhabi, when Robin and her son encountered Hebrew writing in the museum. While touring a room of sacred texts from Islam, Christian and Jewish traditions, the Hammers noticed passages from the Torah.

“We couldn’t believe it when we saw it there,” Robin said. “We weren’t expecting there to be any kind of representation of Judaism.” 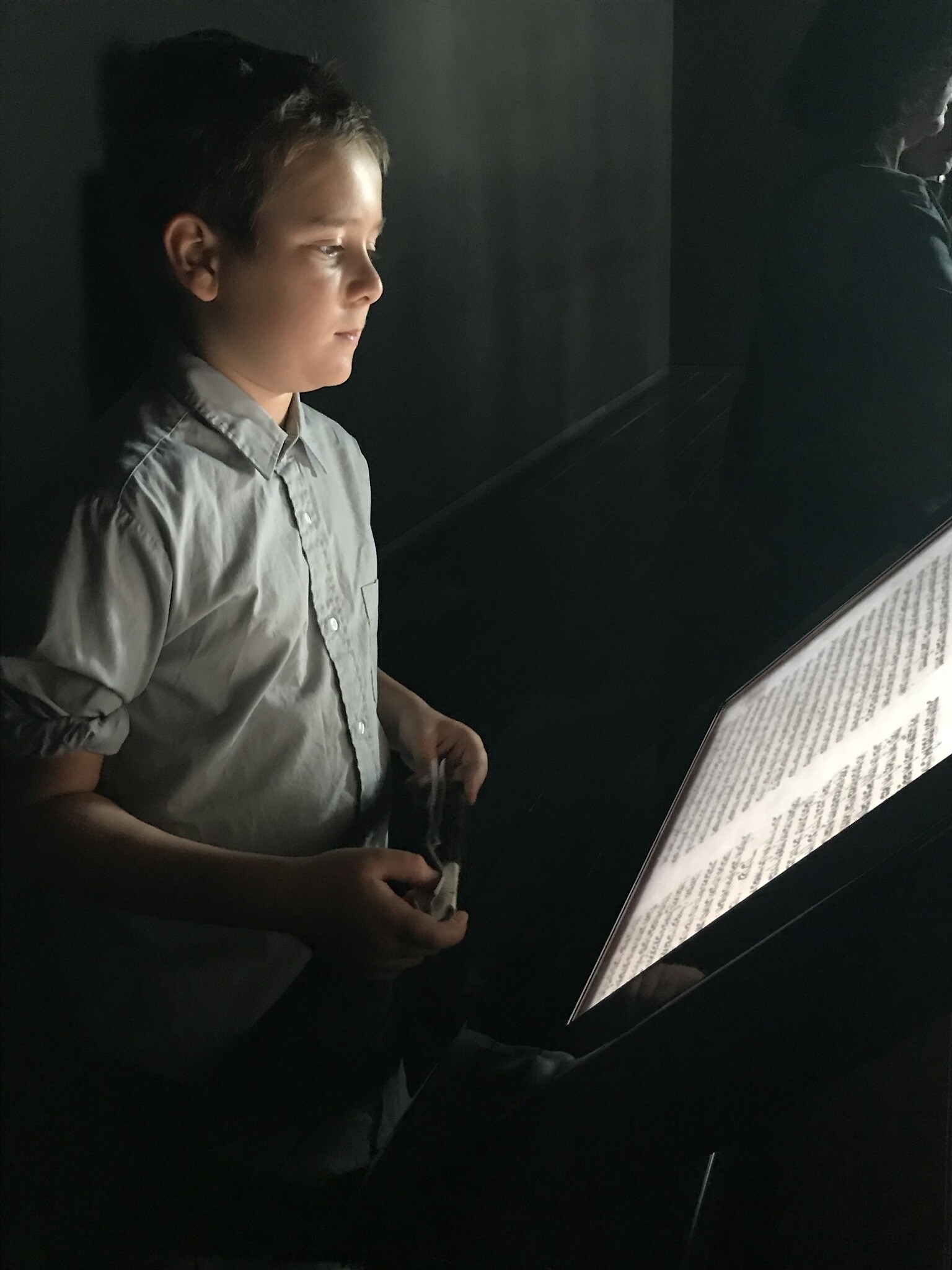 Standing beside Torah text on display at the Louvre Abu Dhabi. Photo courtesy of Robin Hammer

Seeing Hebrew text in a UAE museum was just one of several pleasant surprises.

“They have a different attitude toward work than we do in the U.S.,” said Maxim, explaining that in the U.S., there is a push to work hard and advance, but in the UAE there was more of a commitment to achieving a work-life balance. Every day the clinic closed for lunch, and because of that, people socialized and didn’t feel as though they were supposed to be grinding away nonstop.

Getting to know colleagues, who came from all over the world, and discussing personal and professional issues with them, was eye-opening.

“What I discovered is kind of the obvious: Arabs in the Gulf are the same as anyone anywhere else,” Maxim said. “They have the same anxieties, the same worries. People are people no matter where you go.”

Educationally, politically and socially, the UAE is a guiding regional force, said Robin.

“Whereas other countries are not leaders and not progressive, I think the UAE — and this is my opinion — seeks to really lead the Middle East into the future while still maintaining who they are and their own history and culture.”  PJC