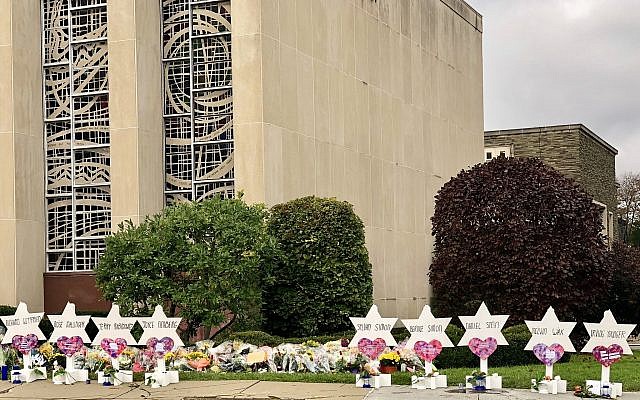 A memorial outside Tree of Life*Or L'Simcha synagogue. (Photo by Jim Busis)

Defense attorneys for the man accused of murdering 11 Jews in the Tree of Life building on Oct. 27, 2018, have filed a motion asking the judge to forgo qualifying his jury for the death penalty.

In criminal cases where the death penalty is a prospective sentence, “death qualified” juries are comprised of people who are not categorically opposed to capital punishment.

In its 80-page motion, the defense argued that screening potential jurors to qualify them for the death penalty would result in the elimination of Blacks, Hispanics, women and members of religious groups that oppose the death penalty, leading to a more likely conviction and death sentence.

“Death qualification of [defendant’s] jury will produce a jury that is statistically less likely to include legally cognizable groups opposed to capital punishment, is skewed toward conviction, and is more likely to sentence him to death. This result is fundamentally unfair and violates the Sixth, Eighth, and Fourteenth Amendments to the United States Constitution,” defense attorneys wrote.

The prosecution will now respond to the motion.

Attempts by the defense to remove the death penalty from the case have failed. Attorneys for the defendant offered a guilty plea in exchange for life imprisonment, but prosecutors rejected that offer. And in 2020, U.S. District Judge Donetta Ambrose, now retired, rejected the defense’s argument that the Federal Death Penalty Act was unconstitutional.

U.S. District Judge Robert Colville, who has presided over the case since Ambrose’s retirement, has said the trial will likely begin next spring. PJC