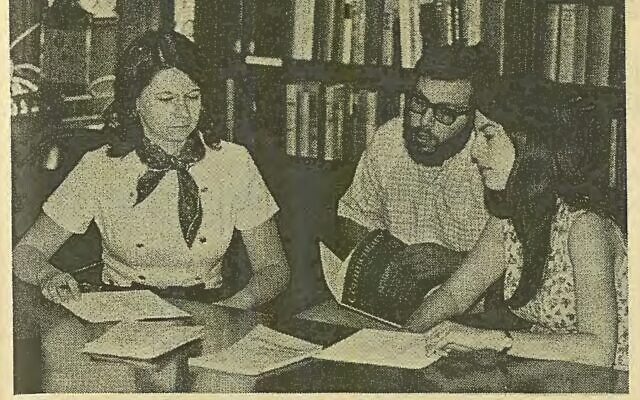 A photograph from the Aug. 6, 1970, issue of the Jewish Chronicle, showing graduate students creating an inventory of historic records at Temple Sinai.

In the spring of 1969, two history professors from the University of Pittsburgh partnered with the Rodef Shalom Brotherhood and the Pittsburgh chapter of the American Jewish Committee to save the Jewish history of Western Pennsylvania. They had three ideas: archival collecting, oral history recordings and a “data bank” of local Jewish communal historical records.

Their first two ideas were already happening. The University of Pittsburgh had been saving local Jewish records since the founding of its archive in 1961, and the National Council of Jewish Women-Pittsburgh Section began its oral history project in 1968.

But their third idea was something new.

They wanted to enlist the entire Jewish community in a massive, volunteer data-entry campaign. They would create, as this newspaper described it in 1970, “a complete and cross-referenced index of information pertaining to the history of the entire community.”

In the current age of genealogy websites, searchable newspapers and census records, and DNA matching, it is easy to shrug at this proposal. To appreciate its farsightedness, time travel to 1969, when acquiring basic genealogical information often required months plopped in front of a microfilm reader or flipping newspaper pages. Imagine typing a name into a hulking, bleeping metal box— and having it spit back genealogical data.

They started by compiling an inventory. A small team of graduate students visited the largest Jewish congregations and major Jewish organizations in the area, asking what historical records were hidden away. They key-entered their findings into a database.

With the help of University of Pittsburgh archivist David Rosenberg, I found a bound printout of this database in the holdings of the University. It is printed on an inch of old-school sprocket-fed continuous stationery with margins that tear along perforations.
Here is a typical entry:

The object being described is a membership ledger from the Sisterhood of Beth El Congregation of the South Hills. The ledger ends in 1948. The start date is marked by an asterisk, which means it was unknown. “ION” means that it contains information about individuals, organizations, and names, with the specifics of those categories detailed on the second line. The ledger was kept, at the time, in “SECO,” the secretary’s office.

The inventory was meant to identify records for eventual key-entry. But the ambitious initiative never advanced beyond its preliminary stage. Despite seed funding and in-kind contributions, it lacked support from the broader Jewish community and soon stalled.

A group revived the project in September 1981. It obtained a charter, drafted a budget, and once again began looking for funding for “a constructive Jewish History Society.”

Again, the project struggled to get community support.

But associated projects advanced. The National Endowment for the Humanities funded “Roots and Branches,” a 1982 exhibit about local Jewish history. In 1986, the Historical Society of Western Pennsylvania and the United Jewish Federation published Jacob Feldman’s book “The Jewish Experience in Western Pennsylvania: A History.”

Those projects generated enthusiasm for local Jewish history. With funding from the Berkman family, the Historical Society of Western Pennsylvania commissioned the Jewish Archival Survey in 1987. It produced a comprehensive inventory of all known records in the community, duplicating some of the work undertaken 17 years earlier.

This time, though, the project advanced.

In the 21st century, the desires of the public have finally caught up with the ambitions of a half-century ago, making it easier to pursue major digitization projects. Within the past two decades, local Jewish newspapers have been digitized, a database of local Jewish burial records has been compiled, and thousands of pages and images have been uploaded to websites like Historic Pittsburgh.

But achieving the full vision from 1970 would still require thousands of volunteer hours, millions of dollars, and the resurrection of the many records described in the inventory that have yet to be shepherded into archival storage.

It is bittersweet to imagine what might have been, had the public been able to foresee its own future desires: a single, searchable repository of all the Jewish community’s records. PJC