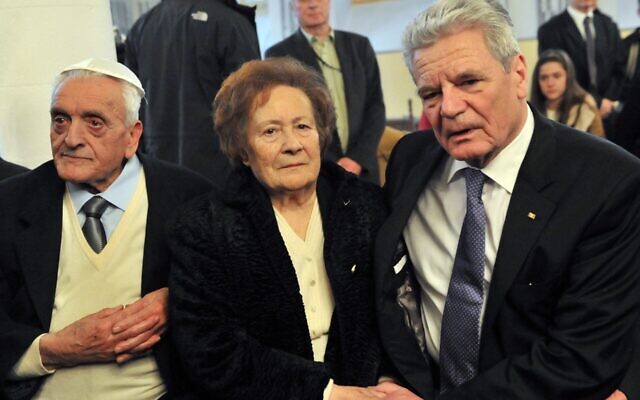 The constant stream of breaking news about American politics and the coronavirus pandemic has hidden a sobering fact: Six prominent Holocaust survivors who had dedicated much of their lives to educating others against hatred have died in Europe over the past month.

These are their stories. 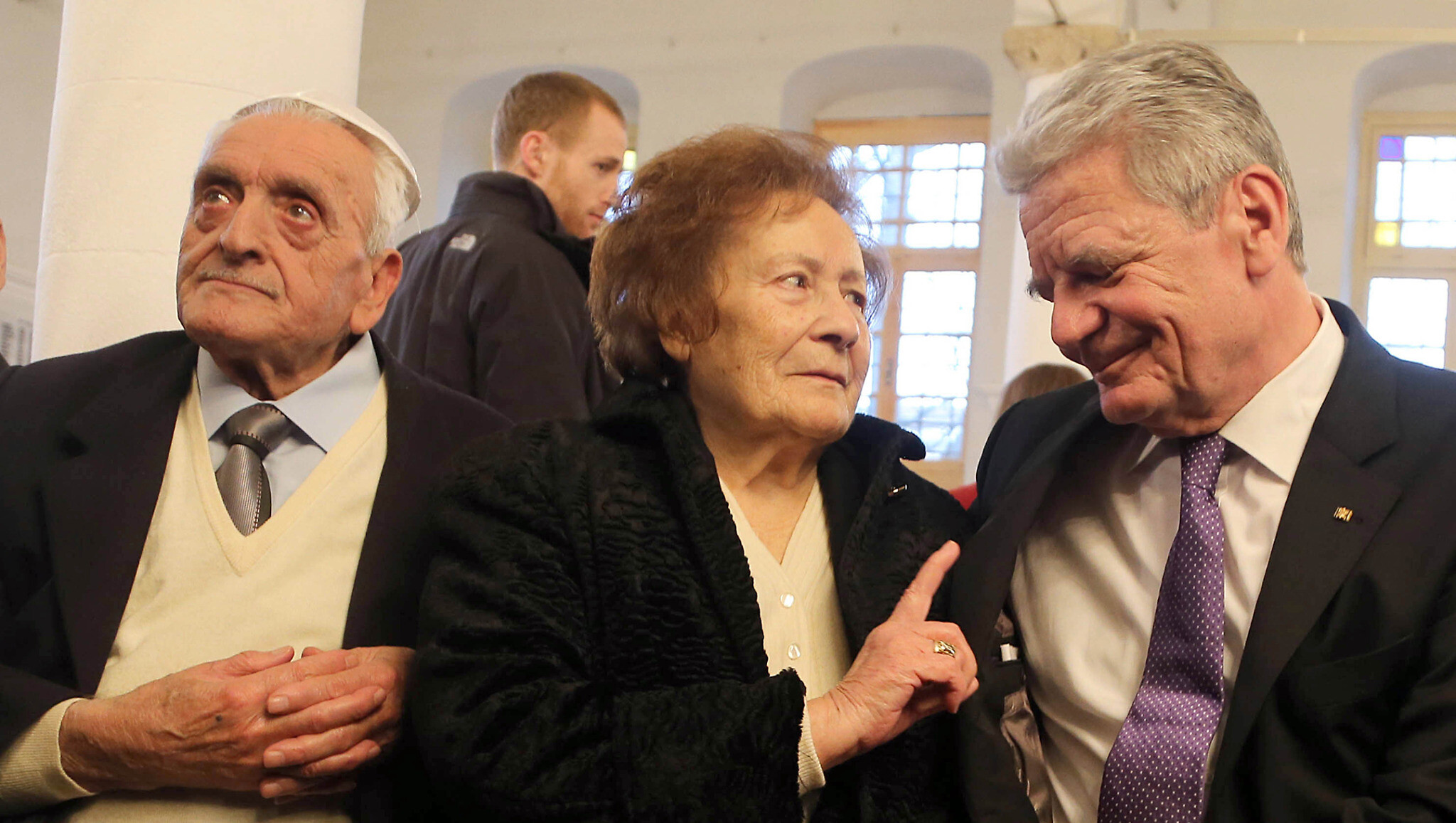 Esther Cohen is flanked by her husband Samuel, left, and German President Joachim Gauck in Ioannina, Greece, March 7, 2014. (Wolfgang Kumm/picture alliance via Getty Images via JTA)
One of only 160 people from her native Greek city of Ioannina who survived the genocide, Cohen died there at the age of 96. She had escaped the Auschwitz-Birkenau death camp and for years told high school students about her survival story in testimonies, TVXS reported.

Cohen belonged to the ancient Romaniote Jewish community, which had survived for 2,000 years before being nearly eradicated by the Nazis. Ioannina was a major center of Romaniote Jews, with about 1,800 living there before the Holocaust. Cohen had two children. 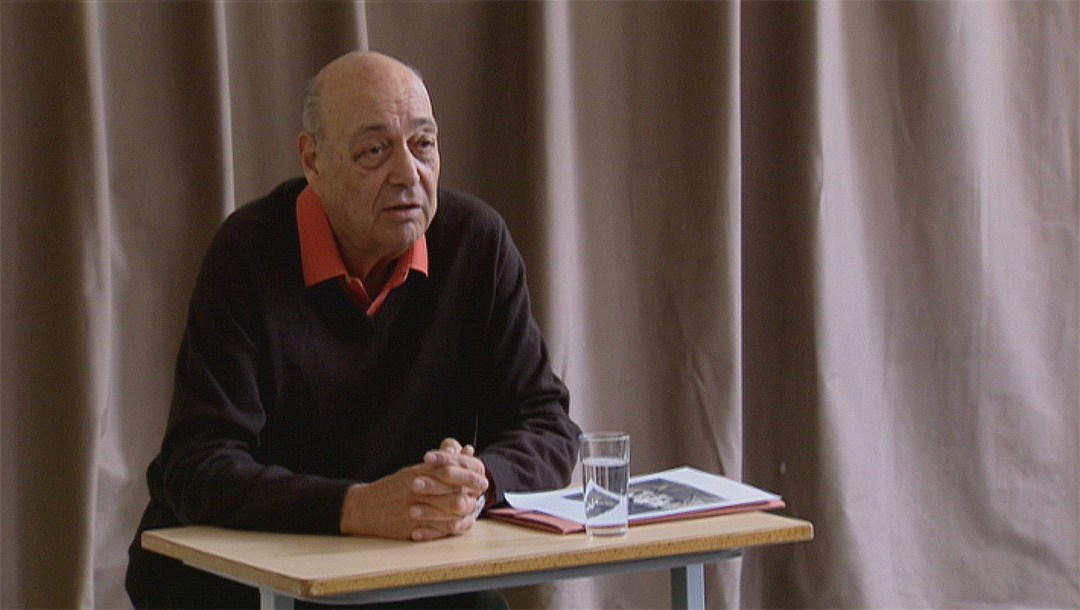 Maurice Cling speaks to high school students in Paris, Sept. 29, 2015. (Memorial de la Shoa via JTA)
Born to Romanian Jews who fled anti-Semitism for France, Cling was a linguist and English teacher who died Nov. 23 in Paris at 91.

An experienced lecturer and gifted writer, he often spoke at high schools before teenagers. Many of them easily related to Cling’s story because he was 15 when police took him away at his school on May 20, 1944.

Cling was sent to the Drancy internment camp with his parents and older brother, Willy. The family was deported to Auschwitz, where the Nazis murdered the parents on arrival. Willy would help Maurice survive the camp but was murdered there. Cling was moved to Dachau and liberated there by American troops. He had four children. 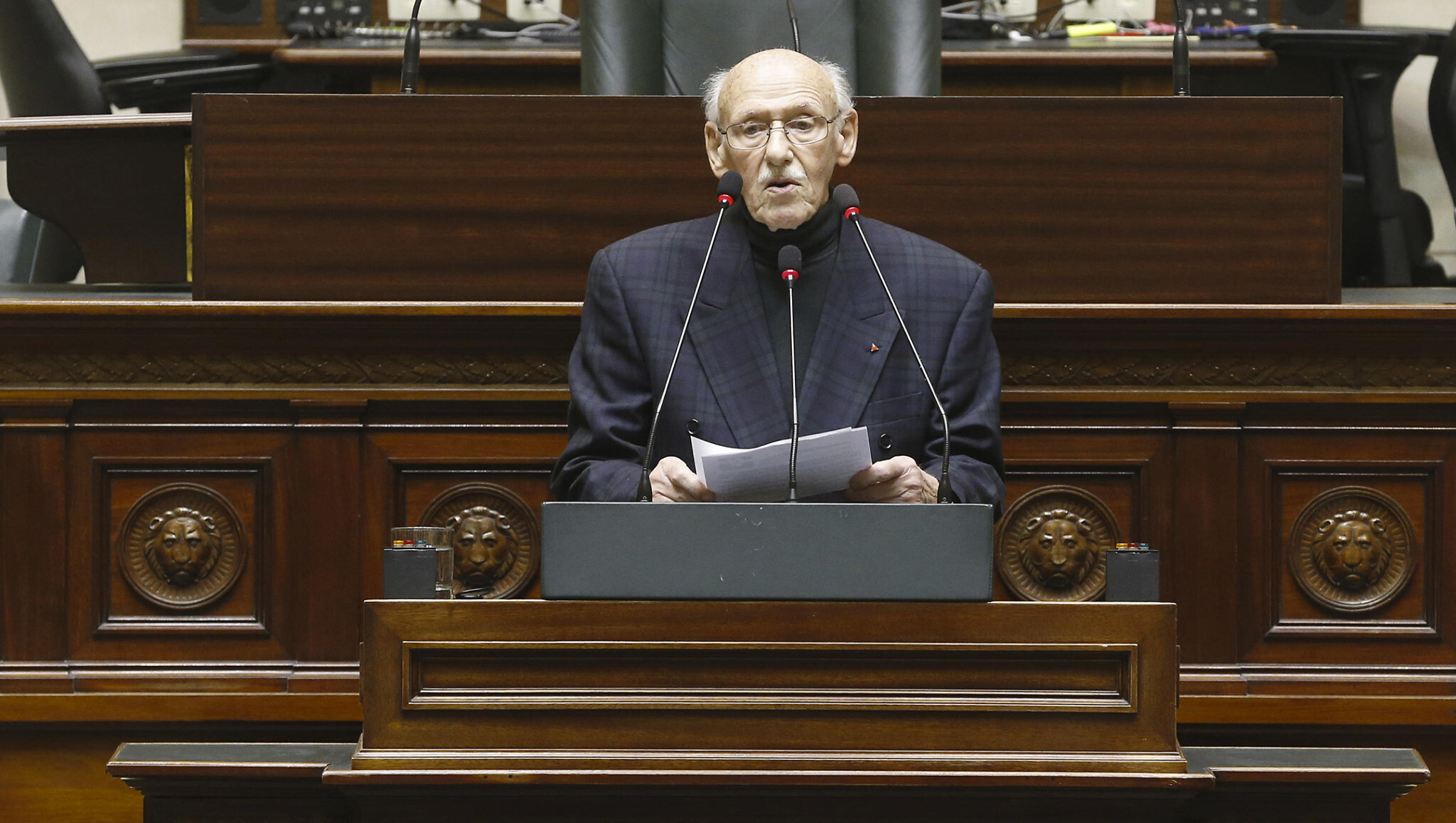 Paul Sobol speaks at the Federal Parliament in Brussels, Belgium, Jan. 23, 2018. (Nicolas Maeterlinck/AFP via Getty Images via JTA)
After walking for days in a death march from Auschwitz, Sobol, who died in Brussels on Nov. 17 at 94, found the strength to escape during an Allied air raid on the German troops guarding him and fellow prisoners. He was 18.

Before his capture, Sobol and his family had lived four years in hiding in Nazi-occupied Brussels. The Nazis murdered his parents and younger brother, but his sister survived.

For many years after the war, Sobol did not speak much about the Holocaust, but felt the need to share his story as he grew older. He would be celebrated by the local media as “a conveyer of memory” for his activities at schools and Holocaust commemoration events. 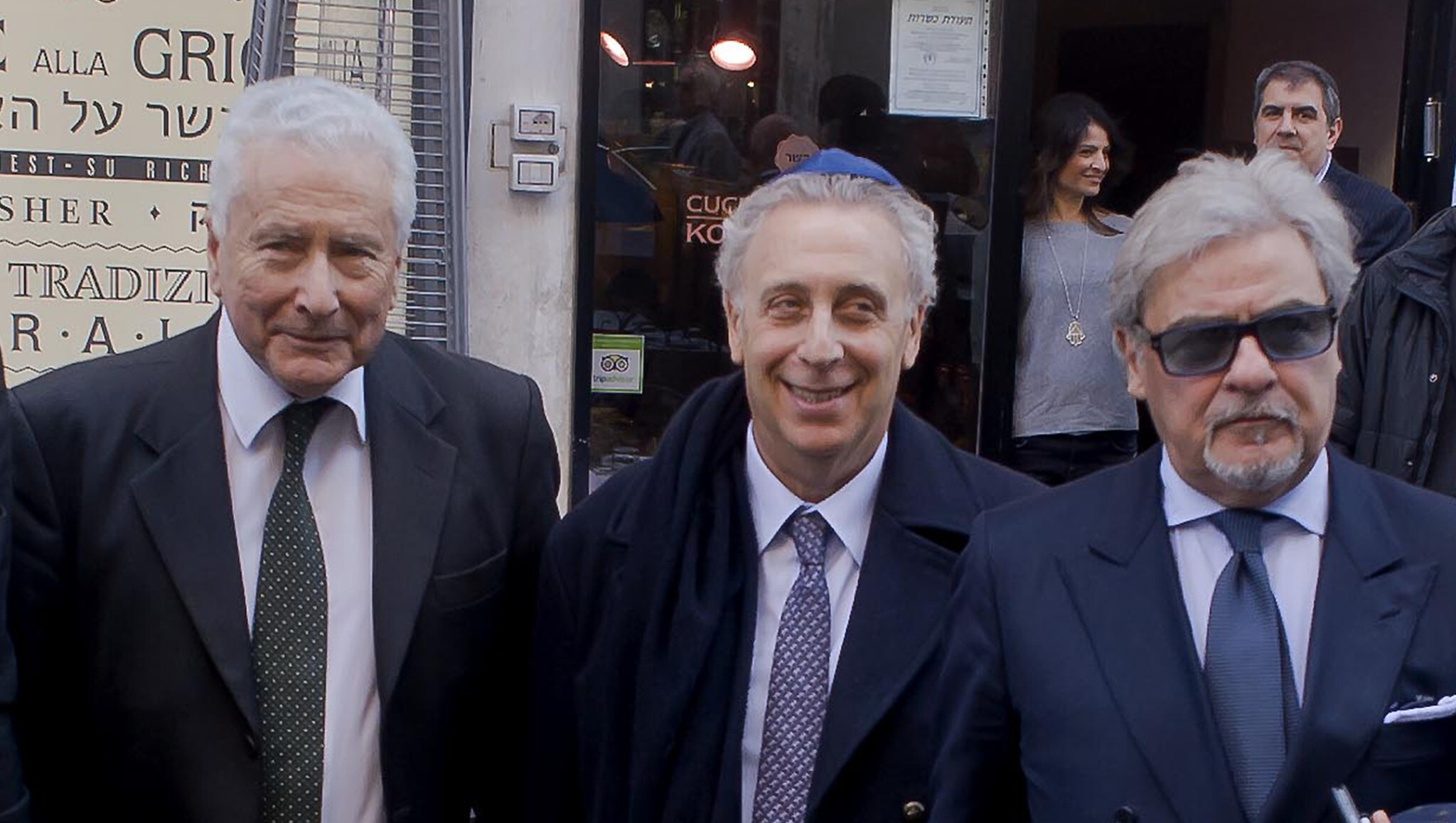 Renzo Gattegna, left, stands outside a kosher restaurant in Rome, March 9, 2015. (Stefano Montesi – Corbis/Getty Images via JTA)
In addition to testifying before young people about the Holocaust, Gattegna, who died of COVID-19 complications on Nov. 10 at 81, also helped rebuild the Jewish community in Italy after the genocide. Gattegna had led the Union of Italian Jewish Communities for 10 years until 2016.

Although he was born in 1938, “I started living in 1944,” he said in one interview. His early childhood was a time of fear, want and uncertainty as his family moved from one hiding place to the next in Rome’s suburbs, where they managed to flee before fascist gangs showed up and ransacked their home. 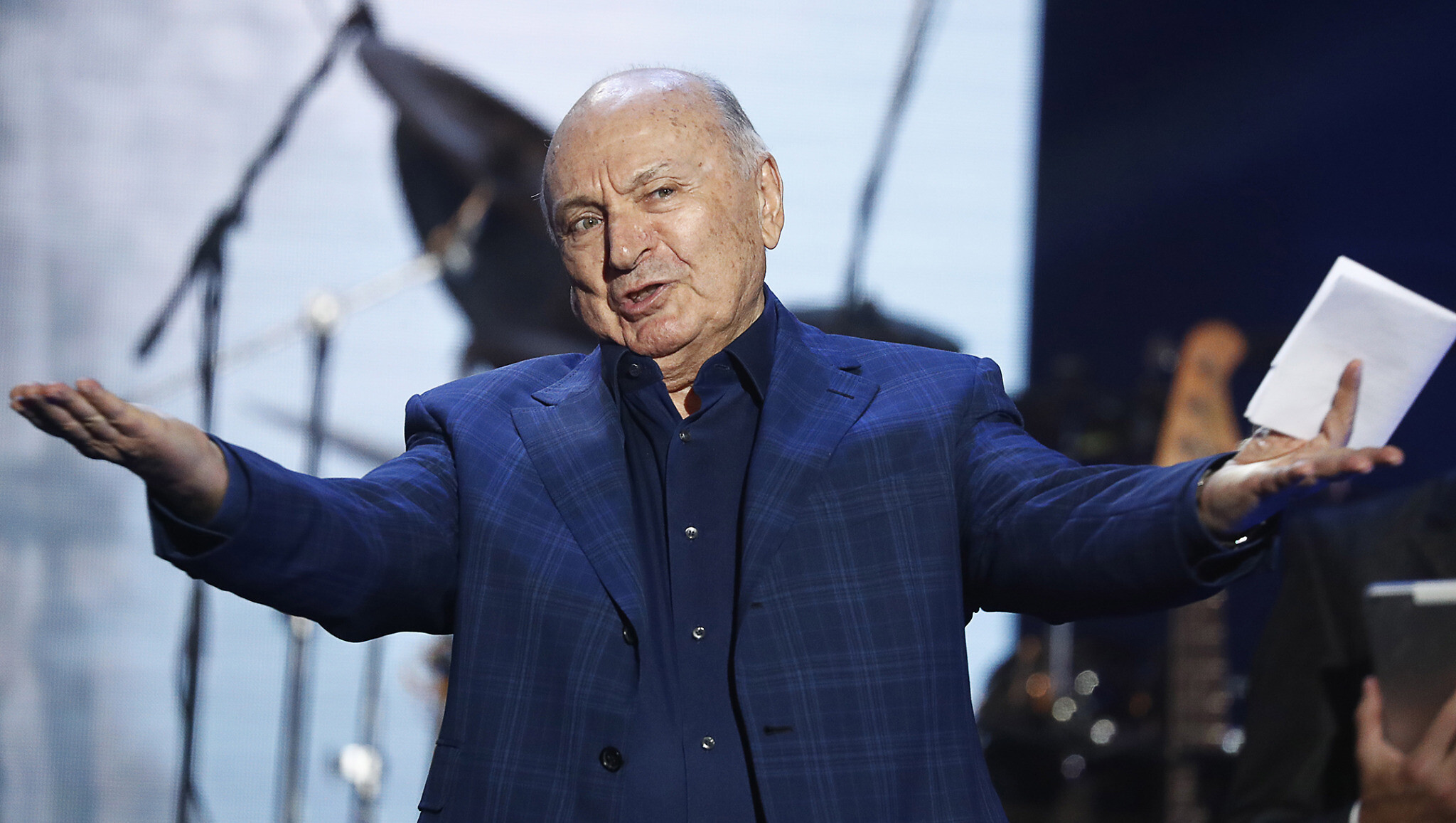 Mikhail Zhvanetsky performs at the Lenkom Theatre in Moscow, Oct. 13, 2018. (Artyom Geodakyan/TASS via Getty Images via JTA)
Before his death on Nov. 6 at 86 in Moscow, Zhvanetsky was a standard-bearer for standup comedy in Russia.

But Zhvanetsky, who identified as Jewish when doing so was dangerous, operated in the Soviet Union under one of the 20th century’s most repressive regimes — one that was famously anti-Semitic. In a disarmingly self-deprecating manner, he delivered his commentary on everyday life in Russia. It was apolitical but with traces of social criticism on the edge of what was safe to say publicly in those years.

Born in Odessa, in what is now Ukraine, Zhvanetsky was evacuated with his family to Russia before the advancing Nazi army conquered his native city, murdering his childhood friends and many relatives in the Holocaust. Zhvanetsky performed for decades until his retirement only last month. He won many awards, including the Order of Merit for the Fatherland last year.

He had five children. 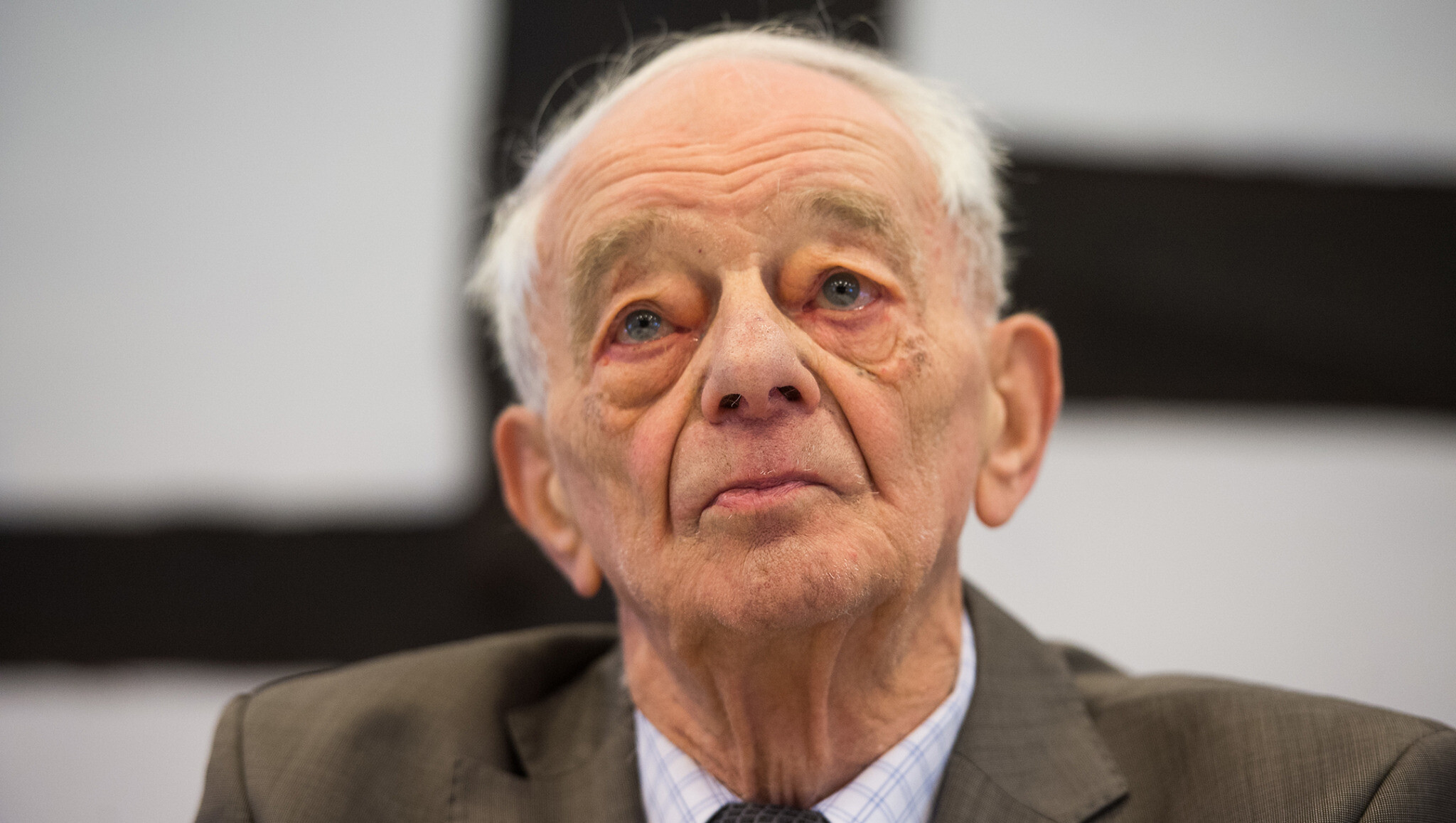 Soon after his return from Auschwitz to Germany, Sonder began devoting his life to rebuilding the society that created Nazism. He became a police officer just six months after U.S. troops liberated him from a death march from Auschwitz, in Poland, to Germany. His mother and 21 of his relatives were murdered in the camp.

Sonder eventually became a commissioner for serious crimes. Following his retirement in 1985, he served as a lawmaker in the federal parliament for four years, beginning in 2009, as a representative of the Die Linke left-wing party. In 2016, he testified in the trial of SS guard Reinhold Hanning, who was convicted of crimes against humanity.

For decades, Sonder spoke about the Holocaust to high school students in eastern Germany, where the far right is seeing a resurgence. He had three children. PJC