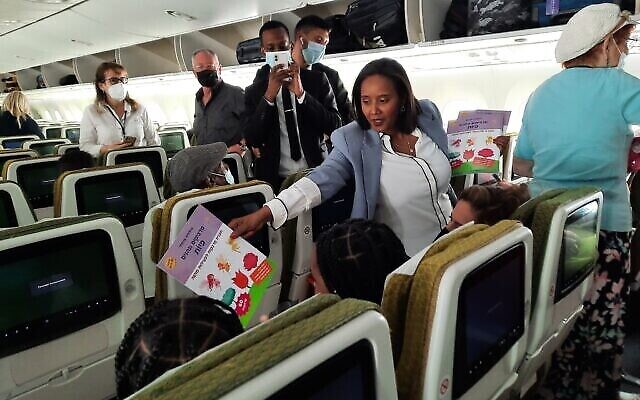 Immigration and Absorption Minister Pnina Tamano-Shata handing out gifts aboard an aliyah flight from Ethiopia on June 1, 2022. (Amy Spiro/The Times of Israel)

Just over 180 Ethiopian immigrants landed at Ben Gurion Airport the afternoon of June 1, some after waiting decades to arrive in Israel and reunite with family members.

The flight kicked off the resumption of immigration from the civil war-torn nation after more than a year following a series of delays. A second flight on June 2 from Addis Ababa was slated to bring a further 160 new immigrants, with more flights expected throughout the summer and fall.

A government decision in late 2021 approved bringing 3,000 total new immigrants from Ethiopia to Israel. Jewish Agency officials say they are all slated to arrive by November.

With many dressed in their most festive attire and overcome with emotion, the 181 new arrivals were greeted by a welcoming ceremony to mark the first aliyah flight from Ethiopia since March 2021, when Israel completed the first half of Operation Tzur Yisrael (Rock of Israel), which brought around 2,000 such immigrants.

The immigration process was held up after the right-wing Israeli Immigration Policy Center filed an appeal against it with the High Court, which froze the measure as it deliberated. In March, the High Court rejected the petition, paving the way for the immigrants to begin to arrive.

Almost everyone on board the June 1 flight reunited with family members, many of whom they haven’t seen in years. Zemenu Atalele finally got to see his mother, who moved to Israel 10 years ago. He traveled with his wife, Yeshihareg, and their three young children, ages 8, 3 and just over 1 year old – who have never met their grandmother.

Teshager Gerem and Alemitu Belew’s two older daughters moved to Israel 17 years ago. Now, they and their seven adult children – ranging in ages from 17 to 35 – will be reunited with them in Israel. They will relocate from a one-room apartment in Gondar with sporadic electricity to one of 12 absorption centers around the country. There, all of the new immigrants will begin months of Hebrew language courses and other instructional activities as well as the process of formally converting to Judaism.

Restarting such aliyah, the Hebrew term for immigrating to Israel, has been strongly pushed for by Immigration and Absorption Minister Pnina Tamano-Shata — herself a native of Ethiopia — who was aboard the flight from Addis Ababa to Tel Aviv.

“When I look at these children and their parents and I hear their stories, their struggle is my struggle — and it must be the struggle of all Israel,” Tamano-Shata said in Addis Ababa on the evening of May 31 just hours before the flight, noting that she fought hard with others in the government to approve the current operation. “We just need to do the right thing.”

Since the conclusion of Operation Solomon in 1991, which saw the vast majority of the remaining Beta Israel community brought to Israel, sporadic government decisions have been made over the years to bring over groups of those left behind, often referred to as Falash Mura — those who converted to Christianity due to coercion or fears of persecution — who are not considered eligible for aliyah under the Law of Return.

Since 1992, an estimated 40,000 such immigrants have been brought to Israel under the Law of Entry, with around 3,500 arriving in the past seven years. The debate over those who still remain behind is fierce — and the numbers heavily contested. Israel has repeatedly declared the end of Ethiopian aliyah in years past, but the issue has been reopened several times, most recently in the wake of the civil war in the Tigray region of the country which broke out in 2020.

While Israel’s government teeters on the brink of collapse, Tamano-Shata vowed to work to implement other parts of the government decision from November, including providing final answers to those still waiting in Gondar and Addis Ababa, and establishing a committee to examine the eligibility of those without first-degree relatives in the Jewish state.

“I have an agreement with [Finance Minister Avigdor] Liberman, that we will bring all those with first-degree [relatives] — he will find the money, the budget,” the minister said. “Once and for all we will end the saga and bring a solution.”

But with little government stability and elections predicted to be on the horizon, it remains unclear what will happen following the immigration of the 3,000 people currently eligible.

On June 1, Uri Perednik, chairman of the Struggle for Ethiopian Aliyah, said despite the welcomed wave of new immigration, “the government of Israel still treats Ethiopian Jews as second-class Jews… if they can bring over 20,000 people from Ukraine in a month, they can certainly bring half that from Ethiopia.”

Each immigrant is approved for aliyah by the Interior Ministry, which — unlike with other immigration to Israel — approves each candidate one by one following an investigation into their status. Since 2014, the ministry only handles requests that have been submitted to it via a family member currently living in Israel.

While the vast majority of the new immigrants view themselves as full members of the Jewish community, they have also all agreed — as part of the aliyah process — to undergo a 10-month conversion program upon arrival in Israel. Jewish Agency officials say close to 95% complete the program successfully — and only then do they receive an official Israeli ID and full citizenship. Those who do not retain permanent residency in the country.

Funding for the immigration operation is split into two: The Jewish Agency — backed by its private donors — covers all costs of preparing the immigrants for aliyah and bringing them to Israel.

Once the new immigrants land at Ben Gurion Airport, the government begins to foot the bill. NIS 570 million ($170 million) has been budgeted to fund the absorption of the immigrants in Israel, the majority of it going toward housing.

Around 30 Jewish Agency employees — most of whom are themselves former Ethiopian immigrants to Israel — had been in Ethiopia for several weeks preparing the families for their impending move. Adane Tadale, the Jewish Agency’s head emissary to Ethiopia, said that since February he has been spending three weeks in the country followed by two weeks in Israel, overseeing all the preparations.

The Jewish Agency has estimated that it will cost around $9.6 million (NIS 32 million) to fund its pre-aliya activities for the 3,000 currently approved new immigrants, which includes pre-flight health checkups and vaccinations, hours of training and preparation as well as the cost of the flights themselves.

Yehuda Setton, COO of the Jewish Agency, noted that they have not yet raised the full amount, “but we work at the same time as we raise money.” During a conversation in Gondar a day ahead of the first flight, Setton said: “We are committed, and I’m pretty sure that world Jewry will raise the money.”

The funding in question is slated to come mostly from the Jewish Federations of North America. A large delegation from Jewish Federations across the U.S. visited Gondar and Addis Ababa last week and flew to Israel with the new immigrants, as did representatives of and major donors to Keren Hayesod, the International Fellowship of Christians and Jews, the World Zionist Organization and other philanthropic foundations.

“There is an unwritten and very powerful agreement that global philanthropy pays for aliyah, that aliyah is much more than the flight,” said Jeffrey Schoenfeld, chairman of JFNA’s Israel and Overseas Committee, while visiting Gondar. “That is an unwavering commitment by the North American Jewish community… it’s been very powerful in the past, and it remains an absolute commitment.”

JFNA originally pledged $5 million toward the current wave of Ethiopian aliyah, and later expanded that to promise $7 million. “We will find a way to raise the funds,” vowed Schoenfeld.

But with 3,000 new immigrants slated to arrive in Israel in the coming months, the real work is yet to come, say Jewish Agency officials.

“In my eyes, the immigration is the easy part,” said Avtamo Yosef, who heads up the Jewish Agency’s department of Ethiopian immigration. “The absorption is the complicated part.”

Yosef, a native of Ethiopia who came to Israel as part of Operation Solomon in 1991, said it is critical that the assistance and framework the new immigrants receive in their first years in Israel “needs to be what the immigrants need, and not what we [already] know how to provide.” PJC