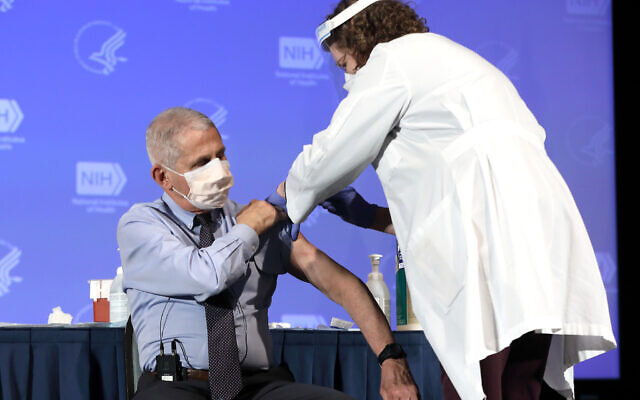 Dr. Anthony Fauci, Director of the National Institute of Allergy and Infectious Diseases, receives the Moderna COVID-19 vaccine at the HHS/NIH COVID-19 Vaccine Kick-Off event at NIH on 12/22/20. Despite the vaccinations roll out, many in Pittsburgh have struggled to find the vaccination. Credit: NIH

Simone Shapiro and her husband hope to spend Passover with their two grandsons, but because of a delay in getting their COVID-19 vaccines, that may not be possible.

The men have been in Israel since making aliyah over two years ago. They will be coming back to the States for the holiday.

“We don’t know when they’ll be coming home again,” Shapiro said. “If we’re not vaccinated, I don’t know how we’ll see them.”

The Shapiros’ tale is familiar to many in the Pittsburgh Jewish community: While the husband and wife qualify to be vaccinated because of their age, they have been unable to get an appointment.

None of those attempts were successful.

So far, her efforts have been met with unanswered phones, messages not returned, and long waits in website queues, only to learn that the number of doses available had already been exceeded.

Pennsylvania’s initial eligibility pool included long-term care facility residents and those working in the medical field; as of Jan. 19, the pool was expanded to include adults 65 and older and anyone between the ages of 16-64 with a host of high-risk conditions, including cancer, chronic kidney disease, sickle cell disease, Type 2 diabetes, COPD, Down syndrome and heart conditions, as well as immunocompromised individuals, those classified as obese or severely obese, pregnant women and smokers.

As of Jan. 21, Pennsylvania was one of 17 states still in Phase 1A of the vaccine’s rollout, according to a report by the Kaiser Family Foundation. For many in the Pittsburgh Jewish community, the process of actually getting a shot has been stymied by a limited supply of the vaccine, miscommunication and technological challenges.

Bryna Siegel Finer is in her 40s but qualifies for the vaccine now because she is immunocompromised.

“The only reason I was able to get it was because I have a friend who was at home and could basically click on the computer for me because she didn’t have anything else to do,” said Finer, who lives in Swisshelm Park. “I have a full-time job; I couldn’t be home all day clicking for an appointment.”

Finer thinks the ability to be vaccinated depends on access and privilege.

“If you are privileged enough to be home all day clicking on the computer; if you’re savvy enough to figure out the system; if you have access to a car and can drop everything to go that day or the next day, then then you can get the vaccine,” she said. “If you don’t have all of those things, then you’re not getting it right now.”

For some, having access to all those things still does not guarantee getting inoculated.

Joan Weiss Stein, 65, was trying to help both her sister-in-law, 79, and brother-in-law, 82, register to get vaccinated when the state expanded the eligibility pool to include her. She grabbed her computer and immediately went to a link to the Allegheny Health Network provided by a friend.

“It was like a miracle,” Stein said. “We got on and we all got appointments. It was a Sunday and we got scheduled for our first appointment the following Tuesday. They scheduled our following shot for three weeks later. Everything was wonderful.”

The three even received email confirmations of their appointments.

Elation soon turned to disappointment when Stein opened another email from the health care provider explaining that the link she used was sent out inadvertently and was only intended for AHN healthcare workers. Because of the mistake, their appointments were canceled.

“We went back to square one,” she said.

Since then, Stein has gone to the health.pa.gov website every day.

“The first day I went there were 10,623 people in front of me,” she said. “I’ve had to wait four hours and 23 minutes, only to learn there are no available appointments. I go on the website now no fewer than 10 times a day.”

Long waits, canceled appointments and limited capacity are not the only complaints with the registration websites.

Dana Hirsch Himmel is included in the high-risk group because she suffered a heart attack a year-and-a-half ago. She was confused and flummoxed by a website meant to be easy to understand.

“I went to the state’s website and it takes you to this little map that has all these dots and no explanations,” she said. “As someone who has worked in marketing, how do you have any sort of visual without a key to what it means?”

Eventually, Himmel learned of a clinic in Monroeville where she and her in-laws were able to make appointments. But they were notified later that those appointments would have to be canceled because that clinic only was providing shots for health care workers.

Himmel is frustrated because what should be a straightforward process has become a treasure hunt dependent on chance or influence.

“It sort of becomes this game where it’s like, who do you know?” she said. “People will put stuff on Facebook like, ‘Oh, I heard of somewhere — private message me if you want to know.’”

Those frustrated by the system cast blame on federal, state and local health care officials.

Mistakes initially made at the federal level were compounded by Pennsylvania, Stein said.

“The state opened up Pandora’s box without knowing what was inside,” she said. “It was entirely irresponsible for the state to open up the eligibility when they know they have not completed vaccinating the [initial group of] people in 1A.”

What was missing in Pennsylvania was a plan, said Shapiro, and “then simply sticking to that plan.”

Pennsylvania Department of Health Deputy Press Secretary Maggi Barton, in a written response to an inquiry from the Chronicle, said the department “designed the vaccine plans to ensure that vaccinations happen in an ethical, equitable and efficient way.”

Barton urged residents to have patience, pointing out that the amount of vaccine currently available is limited but that there will be more in the future.

As of Feb. 1, according to Barton, “providers have administered more than 1,008,025 vaccines across the state.”

Barton recommended that residents continue to wear masks, wash their hands, social distance and download the COVID Alert PA app while waiting for the state to receive an adequate supply of vaccines.

A silver lining amidst the confusion and frustration has been the community working together to help one another find vaccination doses and share information.

One leader in the Pittsburgh Jewish community who has reached out to help is Deborah Winn-Horvitz. The president and CEO of the Jewish Association on Aging was planning a vaccine clinic for its health care employees and residents when she realized that many Holocaust survivors around Pittsburgh might still need to be vaccinated. She reached out to the Holocaust Center of Pittsburgh and together, with Jewish Family and Community Services, is working to identify those survivors in need of receiving the vaccine.

Any survivors in need of the vaccination can contact Sharyn Rubin at srubin@jaapgh.org by Tuesday, Feb. 2, at 4 p.m. to be registered.

While the hunt for the COVID-19 vaccine has caused anxiety and worry for many, Lynn Rubenson might have found a simple solution.

“When it was announced that anyone 65 and older could receive the vaccine, I started doing what everyone else was doing, which is feverishly looking for where I could find an appointment,” she said. “Then I thought, this is ridiculous. I hate to say it, but Pennsylvania has been lackluster in the way they’ve been running their website and providing information, so I’ve decided to take my own best advice: Wait a couple of weeks. I think then we’ll see it open up. What’s another month? I’ve been waiting this long.” PJC