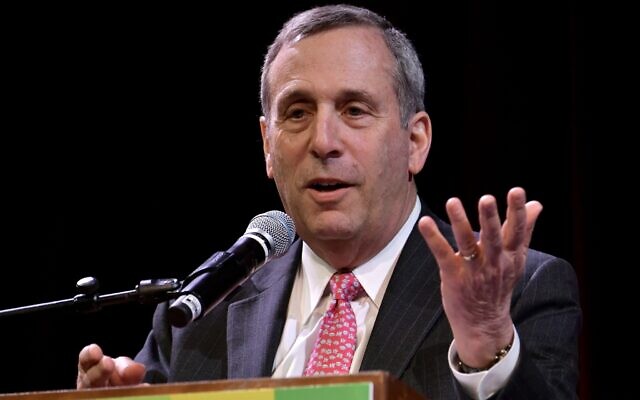 (JTA) – The presidents of Harvard and Columbia have both announced plans to step down after the next academic year, part of a larger sea change in elite higher education leadership at schools that, willingly or not, have been at the center of nationwide campus debates over Israel and antisemitism.

Harvard President Lawrence Bacow’s Wednesday announcement that he would be leaving the school in 2023 came on the heels of a similar announcement in April from Columbia’s president, Lee Bollinger. Their announcements were part of a larger wave of resignations and retirements in the wake of the COVID-19 pandemic and other disruptions to higher education.

Bacow’s tenure will have lasted only five years, with mostly measured responses to Jewish issues on campus. Bollinger has been with Columbia for two decades, and in that time has staked out prominent positions on national debates over campus free speech, antisemitism and Israel policy — at times winning over and at other times alienating Jewish groups.

“There is never a good time to leave a job like this one, but now seems right to me,” Bacow said Wednesday in a letter to the community, writing that his last day will be June 30, 2023. His tenure will be one of the shortest in Harvard’s history.

The son of a Holocaust survivor who fled antisemitic pogroms in Eastern Europe, Bacow, 70, took over as the Ivy League university’s 29th president on July 1, 2018, after previously heading Tufts University. He told the Jewish Telegraphic Agency at the time that he was concerned about college affordability, and that the value of higher education is now questioned among parents and the broader public. (He also pledged to attend High Holiday services at Harvard Hillel.)

But Bacow’s plans for Harvard were upended by the COVID-19 pandemic. Under his leadership, Harvard was one of the first universities to switch to remote learning and Bacow and his wife Adele tested positive for COVID early in the pandemic. Shortly after, Bacow led a high-profile multi-school lawsuit against the Trump administration over a policy to force international students taking online classes to leave the United States.

Bacow took a mostly hands-off approach to issues of campus antisemitism and dialogue around Israel. He entered Harvard having already been on record as downplaying reports of rampant antisemitism on American college campuses, calling such charges a “gross distortion.” He also encouraged fellow university administrators to not label campus Boycott, Divestment, Sanctions movement activity as antisemitic, saying the move shuts down conversation (though he made clear he did not support any university divestments from Israel).

Those views were tested in April of this year, when the editorial board of the Harvard Crimson, the school’s student paper, broke with its longstanding tradition and endorsed the BDS movement. The paper was inspired by pro-Palestinian demonstrations on campus that some Jewish students said made them feel targeted, and that Harvard Hillel heavily criticized. More than 100 Harvard faculty and alumni organized in opposition to the student editorial, including notable university administrators such as Lawrence Summers — a predecessor to Bacow as a Jewish president of Harvard.

Asked by a professor about “rampant antisemitism on campus” in the wake of the editorial, Bacow said the Crimson had the right to publish whatever it wanted, but reiterated his position that boycotting groups over policy disagreements was “antithetical to what we stand for as a university.”

The 76-year-old Bollinger, who is not Jewish, often made headlines for his handling of free speech and antisemitism issues on campus. A former president at the University of Michigan, he twice courted controversy for inviting world leaders who have expressed Holocaust denial and other antisemitic beliefs to address Columbia. Former Iranian President Mahmoud Ahmadinejad, in 2007, and former Malaysian Prime Minister Mahathir Mohamad, in 2019, both visited Columbia at Bollinger’s invitation over the objections of the campus Hillel, the Anti-Defamation League and thousands of protesters.

Brian Cohen, the Lavine Family Executive Director of Columbia Barnard Hillel since 2012, told JTA that he and Bollinger mostly got along, and the president had good relationships with the school’s Jewish students. But Mohamad’s campus visit was “something we strongly disagreed on,” Cohen said. He noted that Bollinger had famously called out Ahmadinejad’s antisemitism onstage in 2007, but failed to do the same for Mohamad.

Yet Bollinger, the highest-paid college president in the country, also frequently acted on any perceived anti-Israel activity among Columbia students and faculty, and among universities in general. In 2005 he appointed a committee to investigate reported anti-Israel bias by two Columbia professors of Middle East studies following the release of a documentary film alleging an anti-Israel climate in the department (the committee eventually cleared the faculty of wrongdoing). In 2007 he became the chief American spokesperson against a call by a British university union to boycott Israel, saying any university that does so “should add Columbia to its boycott list.” He has delivered speeches to the American Jewish Committee, a pro-Israel group.

And in 2020, as an undergraduate student referendum that called for the university to boycott Israel passed, Bollinger delivered a speech to the university senate linking BDS to the rise in antisemitism among college campuses, and instructed the university not to follow the referendum. That move was greatly supported by Columbia’s Jewish students, Cohen said.

Bollinger also contributed to Columbia’s Jewish student life in more unsung ways, Cohen said. He helped launch a dual degree program between the school and Tel Aviv University. And during the pandemic, when Hillel sought to update security for the university’s Kraft Center for Jewish Studies, Bollinger, according to Cohen, privately agreed to have his office pay for the costs of that upgrade.

“He’s had quite a tenure at Columbia,” Cohen said. “We’ll miss him.”

Other prominent university presidents who have recently left their posts include Amy Gutmann at the University of Pennsylvania, who left the Ivy League school in February after 18 years to become the U.S. Ambassador to Germany. Morton Schapiro, at Northwestern University, stepped down this year after 13 years at the helm of the Big Ten school. Both Gutmann and Schapiro are Jewish.

Both also confronted antisemitism and Israel speech issues on their respective campuses, sometimes sparking significant tension within their university communities. Gutmann spoke out against a BDS conference that took place on Penn’s campus in 2012, and Schapiro publicly accused anti-police activists of antisemitism when they called him “piggy Morty” at a protest in 2020. Schapiro’s charge of antisemitism kicked off a large wave of controversy in the Northwestern community, with many students, faculty and alumni — including a contingent of Jewish ones — saying the accusation was over the line, and some calling for his resignation.

In a JTA op-ed that same year, Schapiro, who won Hillel International’s 2019 Maimonides Award for his support of Jewish life on campus, also used Jewish theological teachings to argue that universities would need to “leave the ivory tower” and rethink their approaches to education in the wake of the COVID-19 pandemic.

Correction: An earlier version of this article and headline incorrectly stated that Lee Bollinger is Jewish. He is not. PJC