Theodore “Ted” Stern was many things: a caring husband, brother and father; a nuclear power executive; a 9-year-old refugee from Nazi Germany; a Jew raised in an Orthodox household; and, in one of his final acts, an investor with a knack for turning around fledgling companies.

Stern, a Jewish Pittsburgher for seven decades who spent his last 16 years living in an Oakland apartment, died July 29 after a brief hospitalization. He was 92.

“We were way ahead of the low cholesterol trend in our house, but [Stern] still needed bypass surgery in his 50s — he didn’t expect to live that long,” said Andrew “Andy” Stern, of Baltimore, his eldest son. “He was, in many respects, a very traditional father of that time … He was very dedicated to family. When he was home, he was home. But he loved his work. And he was always a driven guy — if something was broken, he had to fix it.”

Stern came to New York City, settling in Washington Heights, via London in 1938. His father was arrested by the Gestapo in Hamburg during Kristallnacht, or the Night of Broken Glass, and the family quickly fled Nazi Germany for destinations abroad.

“To me, this is a classic immigrant story,” his son said, “a refugee story, an only-in-America story.”

The second youngest of four sons, Stern became the first in the family to go to college, studying at Pratt Institute in Brooklyn after graduating from Brooklyn Tech. He also received a graduate degree in mathematics from New York University.

Stern later was recruited on a scholarship to a government program at the Oak Ridge School of Reactor Technology in Tennessee, graduating in 1952.
He came to western Pennsylvania in 1958 — moving to Eastmont, then Squirrel Hill — to work in Westinghouse’s budding nuclear power operation; he eventually helped put Westinghouse on the nuclear power map and climbed the corporate ladder to the position of senior executive vice president, the company’s No. 2 post. He also served on the company’s board of directors. 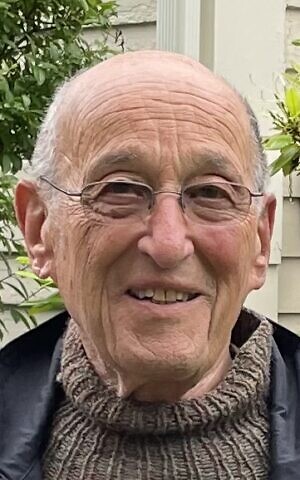 Ted Stern (Photo courtesy of Andy Stern)
“Ted was the G.M. of our division and I was a guy just off the boat,” said Caso, of Point Breeze, who came to Pittsburgh to be an engineer in thermodynamics after graduating from the University of Milan. “Ted was dedicated to nuclear for a long time.”

Caso remembers Stern shot-gunning him with three or four rapid-fire questions during a meeting, then abruptly moving on to other business.
“I learned that this is his style: He’s quick, and he has a good understanding of the subject. You know, he pushed you,” Caso said. “He was not a lovey-dovey type of person. But he was very honest, which, in my mind, is an important trait.”

The two men became friends in their later years, dining together with their wives or attending performances of the Pittsburgh Symphony Orchestra, of which they were both dedicated members.

Stern’s youngest brother, Herb, said he was passionate about — but not consumed by — his work with Westinghouse.

“We were close as a family [and] our conversations were mostly family talk. He did not talk about his career or life with Westinghouse,” said Herb Stern, 91, of Englewood, New Jersey, an artist who worked in advertising and magazine publishing.

After retiring from Westinghouse in 1993, Stern, then in his 60s, became chairman and CEO of a money-losing long distance reseller and built it into a billion-dollar software company. He continued to be active in building businesses, including one in medical cannabis, stepping down from the board of one last NASDAQ company only in 2021 at age 91.

Stern was predeceased in 2015 by his wife, Elizabeth “Liz” Spier Stern, his high school sweetheart. She became ill with an autoimmune disorder about five years earlier. Liz Stern taught English for years at Hillel Academy of Pittsburgh. After earning a graduate degree in urban planning in the 1960s, she went to work for Allegheny County.

“He took care of her,” his brother, Herb Stern, said. “He said, ‘I want to outlive my wife because I want to be the one to take care of her.’ He always did what he wanted to do and he got it done.”

“He was, in many respects, a softie when you came right down to it, despite the hard exterior,” Herb Stern added.

“He wanted to do it all,” his son Andy said. “He took all of that on because he legitimately didn’t want her to rely on anyone who didn’t love her to care for her.”

Jess Stern, a therapist living in Washington, D.C., remembered her grandfather coming over during family visits during her childhood and reading newspapers.

“He had always been very antisocial, [but] when my grandmother passed, he took on her characteristics,” she said. “He was always so invested in how his kids and grandkids were doing in their careers.”

“That’s not the word — but he didn’t seem to have any cares in the world. He was carefree,” she added. “He was just very chill, very laid-back, very pleased with the way his life turned out, especially after the tough start in Nazi Germany.”

The family was “reasonably observant,” he added — they kept kosher and didn’t drive on Shabbat. Stern prayed with tefillin and sang in the congregation’s choir during High Holidays. At 88, after his wife died, Stern took Andy and his sons, Daniel and Zachary, on a trip to Israel.

Andy Stern said his father also was very close with Jason Stern, a grandson who displayed a knack for business.

“He saw elements of himself in all his children [and] they had a connection,” he said. “He really reveled in that with Jason.”

In the end, his father will be remembered as a man who “set objectives” and doggedly pursued them, Andy Stern said.

Along with his son Andy, brother Herb and four grandchildren, Stern is survived by another son, Jon, of Rockville, Maryland; and brother Martin, of Yonkers, New York. His eldest brother, Julius, the first president of Donna Karan Co., died five days after Stern did.

Services through Ralph Schugar Chapel were held earlier this month, and Stern was interred at Homewood Cemetery. Contributions in his memory can be made to the Jewish Federation of Greater Pittsburgh or the Pittsburgh Symphony Orchestra. PJC