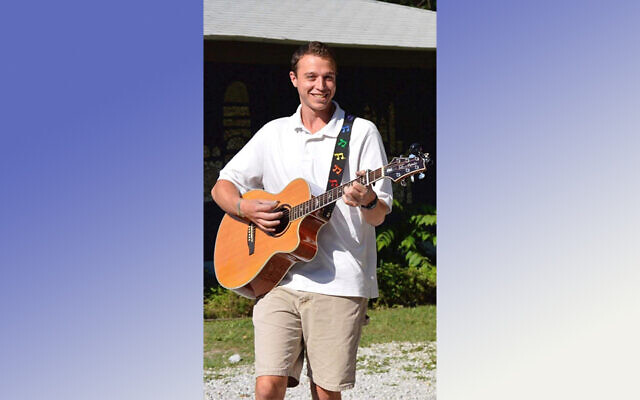 “He just hit all the right notes,” said Shara Taylor, recalling her initial interview with Grant Halasz, Temple Ohav Shalom’s first director of ruach and youth engagement. “He was spot on.”

Talyor, who served on the search committee for the position, recalled that after Halasz’s first interview, “people were just speechless. He exudes youth and enthusiasm. It was just the perfect fit.”

Halasz will be responsible for much of the music at the Allison Park Reform congregation, including leading songs at Shabbat services, and working with the temple’s youth.

Halasz grew up in Centerville, Ohio, a suburb near Dayton. His love of Jewish music was incubated during summers at camp. After years of attending day camps at his local JCC and Chabad center, he spent a summer at the Union of Reform Judaism’s overnight Kutz Camp at the suggestion of his rabbi, Judy Chessin of Temple Beth Or in Dayton, when she learned he played guitar.

After that, Halasz, 23, spent two summers at Camp GUCI (Goldman Union Camp Institute) as a counselor and song leader, then a summer at a URJ camp in Cincinnati, Ohio, and then back to Camp GUCI as head song leader.

Halasz, who is new to Pittsburgh, earned his bachelor’s degree in Judaic studies at the University of Cincinnati, where he was a member of the Jewish fraternity Alpha Epsilon Pi and served as the co-chair of Jewish life on the Hillel student board.

In terms of his interests and experience, for Halasz the new position at Ohav Shalom checks all the boxes. He said he’ll be in charge of much of the congregation’s “musical moments,” and that Rabbi Jeremy Weisblatt told him that he should work on building up the youth group and coming up with new programs for teens and younger children during the High Holidays. Halasz added that he’ll be involved in the religious school and other parts of congregational life.

The congregation’s president, Yuval Kossovsky, said the ruach and youth engagement position is important in the evolution of the Temple Ohav Shalom.

“This was the right piece to fill in,” he said. “We needed someone who had an engaging voice and personality, and the rabbi needed a good partner. This seemed the most appropriate way to do that.”

Kossovsky thinks Halasz is the right person for the job as the congregation embraces technological advances driven by the pandemic, and looks for new ways to engage members — both virtually and in-person.

“There seems to be a big change in the way we need to engage,” Kossovsky said. “The traditional sort of Hebrew school and liturgy is not working for a lot of young folks, so, what do we do? How do you give them a good enough feeling that when it’s time to make their parents’ religion theirs, they have an affinity?”

Ohav Shalom, Kossovsky stressed, is looking to the future.

“It’s about the connection,” he said. “How do we use the technology? I don’t think it’s going away. I don’t know what the future holds, but I know it’s changing. I think that Grant is going to bring a lot to our program.”

Taylor said it was Weisblatt who first learned of Halasz and brought him to the attention of the search committee.

“I’m excited about the new vision that we’re executing with Grant,” Weisblatt said. “I love his experience and focus on experiential worship — his willingness to pay homage to tradition, to stand on tradition and then move it forward.”

Judaism has a history of being experiential, Weisblatt said, and Ohav Shalom’s Judaics curriculum is moving in that direction.
“Now we have someone that is educated in it and has lived it and helped bring it to life,” the rabbi said.

“He will, I think, help fulfill our vision and dream in the North Hills.”

For Halasz, who considered going to rabbinical school before accepting the position at Ohav Shalom, the future is now.

“It’s very exciting,” Halasz said. “I’m looking forward to the opportunity and making it my own. It’s going to be a lot of fun.” PJC

David Rullo can be reached at drullo@pittsburghjewishchornicle.org.