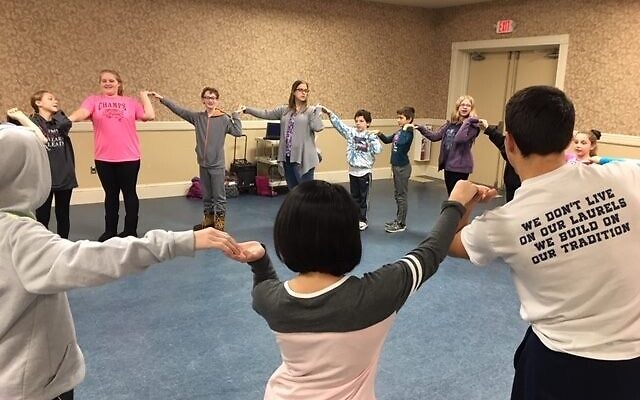 Rabbi Barbara Symons hopes that students will begin an ongoing relationship with Israel as a result of a curriculum shift at the Temple David Weiger religious school.

Four years ago, the Monroeville congregation implemented a six-year curriculum cycle for its religious school students. Since the six-year cycle began in 2017, yearlong topics have included values, holidays, sacred texts and life cycles. This year, the topic will be “authentic Israel,” said Symons, who, in addition to serving the congregation as its spiritual leader, is also its director of education.

Temple David’s religious school students are grouped into “grade clusters”: pre-K to 2nd; 3rd to 5th; 6th to 7th; and 8th to 10th. Each cluster has its own day-to-day curriculum while focusing on the same fundamental ideas coinciding with the yearlong theme, Symons said. This year, those fundamentals will include having a connection to Israel as a means of strengthening Jewish identity; studying Israel as an emotional, intellectual and creative pursuit; and being lovingly critical of Israel as a sign of an authentic relationship.

The Israel curriculum will also emphasize the concept that American Jews can have a home both in the U.S. and in Israel, and feel a connection to both places, she said. Guest speakers will be invited throughout the year to discuss the Jewish state and share personal stories.

The Israeli-Palestinian conflict, Symons said, “made it all the more important to teach about Israel in an authentic, loving and honest way.”

“I am well aware that we can stay safe and we can focus on geography, statistics, demographics and political structures, but that is not authentic Israel,” she added. “It doesn’t open our hearts to Israel — it opens our intellectual capabilities to Israel.”

The religious school students will look at honest reporting about Israel, according to Symons, and students will scrutinize headlines that may be misleading or altogether wrong.

Temple David is encouraging its members to sign up for the Jewish Federation of Greater Pittsburgh’s Mega Mission, which is planned for June 2022, or Temple David’s own trip to Israel in March 2022, she said.

“For those who are going to Israel, we really need to think about what we want to experience,” she said. “It can’t only be about ancient Israel and the physicality of Israel, but also the humanity of Israel.”

One of Symons’ upcoming sermons for the High Holidays, titled “Now Boarding: Flight 18 to Tel Aviv,” will take listeners on a flight into Israel — describing passengers with different religious backgrounds and political philosophies, but all travelling to the same destination, she said.

“I am hoping to bring this forward to every cohort and corner of Temple David,” Symons stressed. “We have to think about how to present this to both our kids and our parents so that they engage with the curriculum. We want them to have the ability to reach out to other resources, identify bias, love Israel and have the longing to either go, or to go back.” PJC