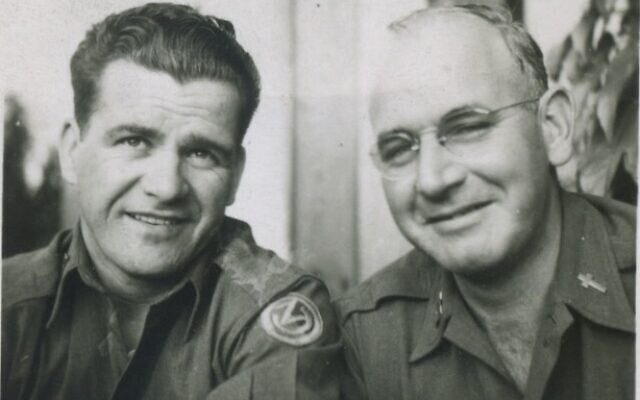 Harry Knights (left) with Father James Glynn during their service together in World War II. They would remain friends for decades. (Image courtesy of Seton Hill University)

Seton Hill University students have been working for months to develop a series of virtual presentations showcasing photographs and materials revealing Nazi war crimes at Gardelegen, a small German town, at the end of World War II.

“This has been a challenging job getting this exhibit ready because we had the collection all set up in August for an on-site viewing, but then the pandemic hit and we had to change how we were going to present the materials,’’ said Hannah Vincent, co-curator of the exhibit and a senior from Connellsville majoring in arts administration at Seton Hill. Phoebe Walczak, a senior art history major, also has helped with the exhibit planning.

“We are also very fortunate to have exposure to the National Catholic Center for Holocaust Education,’’ she added. “People must never forget the Holocaust.’’

The virtual presentations are hosted by the Seton Hill University National Catholic Center for Holocaust Education. The archive of photographs and letters originated from the collection of a U.S. soldier whose unit was involved in the liberation of Nazi concentration campus at the end of World War II.

In the fall of 2019, retired FBI Special Agent James Knights approached the National Catholic Center for Holocaust Education with a proposal to have the university house the extensive collection of photos his father, Harry, took during his time in the service as well as other materials, including correspondence.

Much of the collection includes photographs taken at Gardelegen, a German town where nearly 1,000 prisoners, at the end of the war, were marched to a large barn that was set on fire, killing most inside.

The Knights Collection is a valuable resource for Seton Hill students and scholars of the Holocaust, according to James Paharik, director of the National Catholic Center for Holocaust Education at Seton Hill University.

“The many photographs taken by the American soldier document Nazi war crimes that had occurred in the concentration camps,” said Paharik, a professor of sociology who has been at Seton Hill for 35 years. “The Knights Collection offers us an opportunity to learn about and to honor the sacrifices that U.S. soldiers made to combat fascism in Europe. The collection of more than 200 photographs and dozens of letters provides a window on the life of a typical soldier, Harry B. Knights. It also enables us to confront, as he did and his unit did, the clear evidence of hideous war crimes that the Nazis committed.’’

The work of preserving the collection was a massive joint effort by the National Catholic Center for Holocaust Education, the School of Visual and Performing Arts, the School of Humanities, and the Seton Hill Archives. Faculty and staff on the project also included John Spurlock of the history program, Maureen Kochanek and archivist William Black.

The virtual presentations are scheduled for Nov. 6, 13 and 20. They are free and open to the public. For more information visit setonhill.edu/centers-community-programs/holocaust-center/knights-collection. PJC

Chriss Swaney is a freelance writer living in Pittsburgh.