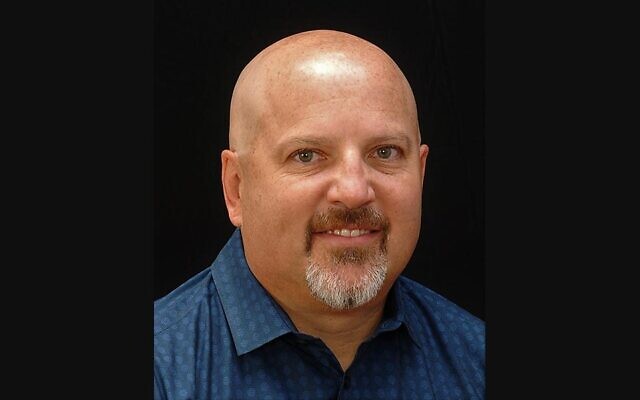 James Lucot is the 2020-21 Holocaust Educator of the Year. Headshot provided by James Lucot.

James Lucot Jr. identifies with the victims of history and those abused by people in power. Perhaps that is why he developed a passion for teaching the Holocaust.

His uncle was a soldier killed in World War II, and his earliest memories, he said, are of his grandmother taking him to visit his uncle’s grave.

“I don’t have any memories without World War II,” said Lucot. “My grandma tried to explain to me as a little boy that we lost him because he was stopping what the Nazis were doing.”

As someone with a lifelong interest in history, he has concentrated on different eras, “but the Holocaust always stayed with me,” he said. In his 20s, he began reading about survivors in the newspaper and then arranged to meet them and interview them.
“And I did that my whole life,” Lucot said.

The Holocaust Center of Pittsburgh recently announced that Lucot, who teaches Advanced Placement U.S. government and Honors U.S. History at Seneca Valley High School, was named the 2020-2021 Holocaust Educator of the Year. The award includes a cash prize to both the teacher and the school to support Holocaust education.

“This is very, very special to me,” Lucot said. “I’ve received a couple of honors similar, but this one is very special to me because it’s Pittsburgh and it’s all my peers. It’s people who know me. And there are some tremendous, tremendous Holocaust educators in Western Pennsylvania. I’m very humbled.”

Typically awarded in the spring after a competitive process, this year’s winner was chosen in the fall due to the pandemic, allowing the money to reach Seneca Valley High School at a crucial time, according to Lauren Bairnsfather, director of the Holocaust Center.

Giving the award to Lucot was “almost like we were giving him like a lifetime achievement kind of award because he has done so much, over so many years,” she said.

Lucot first connected to the Holocaust Center in the 1980s, while still in his 20s; prior to the internet age, the history teacher’s main source of information had been the Squirrel Hill Barnes & Noble.

In addition to learning about the Holocaust from first-hand survivor accounts and through the Holocaust Center, Lucot has toured several former concentration camp sites including Auschwitz, Birkenau, Treblinka and Majdanek.

During a Classrooms Without Borders trip to Poland that included Pittsburgh survivor Howard Chandler, Lucot had what he called a “lightning bolt” moment. 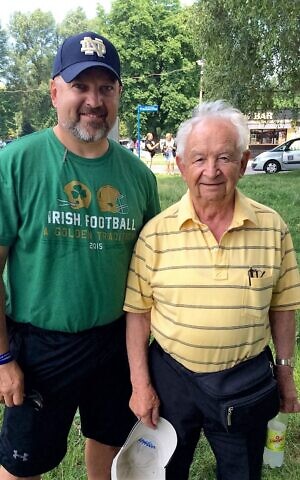 Lucot decided he wanted to teach about the Holocaust after a trip to Poland with Howard Chandler. Photo provided by James Lucot.

“I said, ‘When I get home, I am going to teach classes about the Holocaust,’” he recalled.

Despite his passion, Lucot was turned down several times when he offered to establish a Holocaust elective at the high school. Instead, he teaches about the subject in his history classes and has created a Holocaust studies course at Butler County Community College.

Both a teacher and student of the Holocaust, Lucot was nominated by Classrooms Without Borders founder Zipora Gur to study for a summer at Yad Vashem in Israel. He recently completed a second master’s degree, in Holocaust and Genocidal Studies at Gratz College just outside of Philadelphia.

The Holocaust, Lucot said, “showed man at his absolute best and absolute worst, at the exact same time in history, which never existed before.”

Lucot said his students don’t know much about the Holocaust prior to taking his course. Once they get past initial reactions— like disbelief that 6 million Jews were killed by the Nazis — they become receptive to the lessons. That’s when “the questions start rolling in,” he said.

Lucot attempts to move history and Holocaust education beyond the simple memorization of dates and vocabulary words. He teaches about Kristallnacht, for example, on the anniversary of the pogrom each year, delving into its significance and meaning without the use of textbooks.

According to a recent survey of millennials and Gen Z by the Conference on Jewish Material Claims Against Germany (known as the Claims Conference), 63% of respondents did not know 6 million Jews were killed during the Holocaust; 36% believed 2 million or fewer Jews were killed; and 48% could not name a single concentration camp or ghetto.

“It is a very long time ago for kids,” Bairnsfather said. “The way we teach has to emphasize that it’s relevant now.”

“I’ve seen it and I’m a product of it,” he said. “I was raised in a racist household and I’ve changed the whole spectrum in one generation.”

Lucot highlighted his adolescent struggles growing up with an abusive father in his book “My Prison Had No Bars: A Child Growing Up in Silence.”

That experience allows him to relate to students with a similar background.

“I can’t confide in them because I’m a teacher, but I’ll tell them, ‘We have more in common than you think,’” he said.
Bairnsfather is hopeful that teachers like Lucot will impart the lessons of the Holocaust to future generations and show why it is meaningful.

“They feel a connection to the potential of Holocaust education, to improve things now to empower their students,” she said. “This is where I find optimism — in what we’re doing and in thinking about the future. If there’s potential, we can be better, right? Because of this diverse group of educators who care about the Holocaust.” PJC