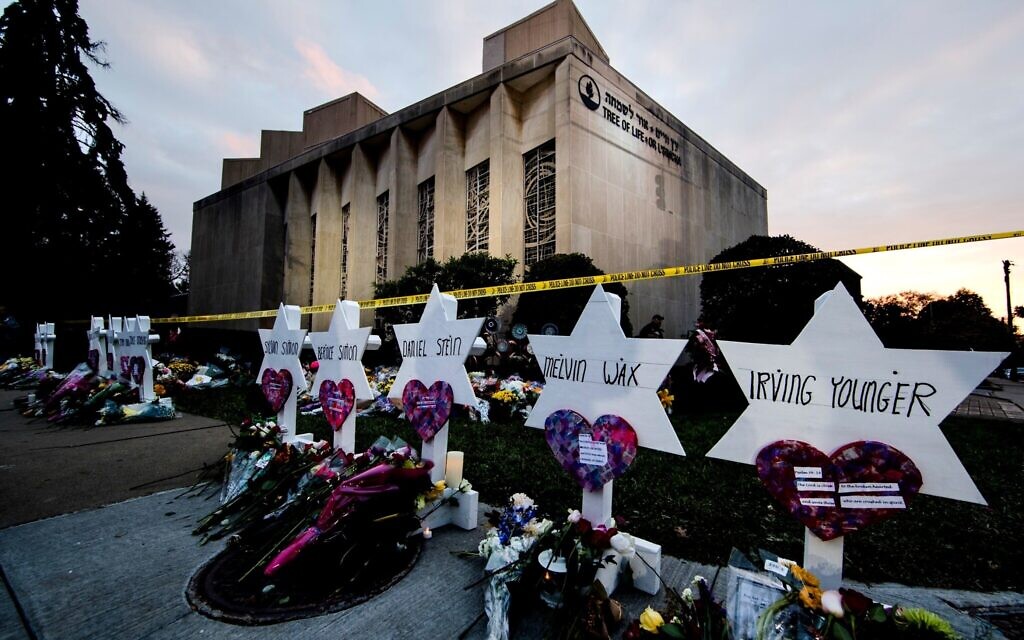 Still from “Repairing the World: Stories from The Tree of Life” (Photo courtesy of Film Pittsburgh)

Journalists from around the globe came to Pittsburgh following the massacre at the Tree of Life building to report on the most horrific act of antisemitism in the history of the United States. Thousands of stories were written about the victims, their families, the killer. Survivors were interviewed about the details of that devastating Shabbat morning when 11 Jews were murdered in their house of prayer by a white supremacist who left a trail of hate on his social media accounts.

But in the documentary “Repairing the World: Stories from the Tree of Life,” filmmaker Patrice O’Neill shows her audience what happened next: The inspirational story of the citizens of Pittsburgh determined to turn the phrase “never again” into action.

“Repairing the World” is exactly what Jewish Pittsburghers, and their neighbors, have set out to do.

The film will have its world premiere at the JFilm Festival on May 5 at the AMC Waterfront.

O’Neill, who is a leader of Not In Our Town — a nationwide movement of people working to build safe and inclusive communities — spent three years filming “Repairing the World.” The end result is a moving portrayal of a city flung into the depths of shock and despair but resilient and motivated to do good in response.

Tree of Life Rabbi Jeffrey Myers, emeritus Post-Gazette Editor David Shribman, shooting survivor Andrea Wedner and her family, Maggie Feinstein of the 10.27 Healing Partnership, Rabbi Ron Symons of the Jewish Community Center of Greater Pittsburgh and Lauren Bairnsfather of the Holocaust Center of Pittsburgh are among the Jewish Pittsburghers sharing their perspectives as members of a people targeted by hate for centuries but who are determined to change the paradigm.

The film, though, reaches far beyond the city’s Jewish community.

Wasi Mohamed, former executive director of the Islamic Center of Pittsburgh, explains how his community rose up to aid its Jewish neighbors following the attack. Steeler Zach Banner shares how he took a fellow NFL player to task after he made an antisemitic comment. Post-Gazette columnist Tony Norman describes the many bridges — both literal and metaphoric — that were crossed in the aftermath of the massacre. Former Mayor Bill Peduto explains how Pittsburgh’s City Council passed three laws aimed at curbing gun violence less than six months after the shooting — legislation that quickly got overturned by a court.

Scenes from a vigil at the corner of Forbes and Murray avenues organized by Allderdice High School students the night of the attack; a rally held by the group Squirrel Hill Stands Against Gun Violence, which was formed following the massacre by members of Dor Hadash Congregation; footage from the Eradicate Hate Global Summit held downtown in 2021 — where world leaders came together to deliver solutions to hate — are just a few of the vignettes O’Neill uses to illustrate how the shooting brought the wider community together for a common purpose.

The film delves into the scourge of white supremacy and examines its threat, not only toward Jews, but other marginalized communities such as Blacks and Asians, as well as actions taken by Pittsburghers to thwart it. When Asians in Squirrel Hill are the target of hateful rhetoric during the early weeks of the pandemic, Jewish Pittsburghers take to their defense. Marian Lien, president of OCA Asian Pacific American Advocates Pittsburgh Chapter, tells how she was told to “go back to China with the virus.”

“The Jewish community said, ‘Tell us what you need,’” she recounts.

Quiet acts of resilience are showcased as well. A rose garden is planted in memory of Rose Mallinger, a 97-year-old grandmother who read the Prayer for Peace at Tree of Life every Shabbat. Achieva, the residence of Cecil and David Rosenthal, launches the Love Like the Boys initiative to promote random acts of kindness. One year after the attack — on Oct. 27, 2019 — the families of the victims request the community to engage in a day of service and the community obliges by cleaning up the grounds of a cemetery, sorting items at a food bank and making blankets for refugees.

Ultimately, “Repairing the World” is a film about the power of relationships — those formed after and as a result of the massacre, and those forged beforehand.

This film may well be a call to action to citizens across the country to ensure their own communities are safe and welcoming to all. PJC

Toby Tabachnick can be reached at ttabachnick@pittsburghjewishchronicle.org. This review was based on a version of the film prior to its final cut.