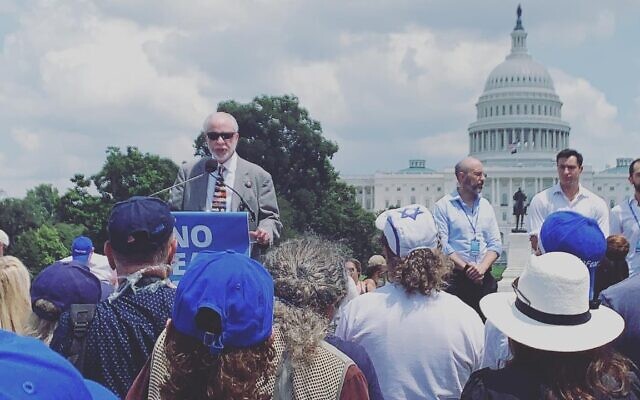 Rabbi Jeffrey Myers speaking at the 'No Fear' rally on July 11, 2021 (Photo courtesy of Julie Paris)

More than 2,000 people from across the country gathered near the U.S. Capitol on Sunday to stand in solidarity against the rising tide of anti-Semitism across the United States.

“No Fear: A Rally in Solidarity With the Jewish People” was organized by more than 100 Jewish and interfaith organizations from across the political and religious spectrum, under the leadership of business executive Elisha Wiesel, son of Holocaust survivor and Nobel laureate Elie Wiesel.

“Looking out at all of you today, it becomes clear that instead of dividing us, the enemies of the Jewish people—whether from the right or the left, at home or abroad—have instead united us,” Wiesel told the crowd.

“Here we stand, a coalition of Jews and our allies from all backgrounds, all political beliefs and all religious affiliations, who have come together to stand up to anti-Semitism,” he said. “This coalition will not be silenced whether Jews are facing violence in Los Angeles, or Brooklyn, or Paris or Tel Aviv. It won’t be silent whether Jews are being attacked in our synagogues, on our streets, on our campuses or on the floor of the House of Representatives.”

Rabbi Jeffrey Myers of Tree of Life Congregation, was one of the featured speakers. He described saying the viduy, the Jewish prayer before death, as an antisemite murdered 11 Shabbat worshipers in the Tree of Life building on Oct. 27, 2018.

“‘We hold these truths to be self-evident that all men are created equal, that they are all endowed by their Creator with certain unalienable rights, among them life, liberty and the pursuit of happiness,’” Myers said, quoting the Declaration of Independence. “To be an antisemite means you do not accept that pact of being an American.”

“My dream,” Myers told the crowd, “is that one day we don’t have to hold these rallies anymore.”

In a show of unity, Joshua Washington, executive director of the Institute for Black Solidarity with Israel, and Rabbi Menachem Creditor, UJA Federation of New York scholar in residence, appeared on stage together and led the crowd in singing, “Kol Ha’Olam Kulo Gesher Tzar Meod,” meaning, “The whole entire world is a very narrow bridge, and the main thing is to have no fear at all.”

“As President [Joe] Biden so often says, ‘silence is complicity,’ ” said Moritsugu. “Each and every one of you attending this rally today in person or virtually understands that shared responsibility to come together, speak out and fight the evil of antisemitism. The Biden-Harris administration stands with you and the Jewish community.”

Wiesel thanked the Biden administration for sending Moritsugu and “for the way that the White House stood with Israel” during the recent hostilities with Hamas in the Gaza Strip. “I think the president and the White House deserve our appreciation,” he added.

Sharing the stage with Klein, Coleman declared, “Antisemitism is not just a Republican problem or a Democrat problem, and Republicans and Democrats share a common interest in calling it out when we see it, even when it’s in our own backyard … the fight against antisemitism bridges the political divide. United we stand, divided we fall.”

“It cannot be a norm in America for Jews or any other religion, racial or ethnic group to be slandered, libeled or physically assaulted,” said Klein. “Today, we stand together as elected leaders from both political parties, faith leaders, business and community leaders, to send a message that anti-Semitism has no place in America or anywhere in the world.”

Participants also heard from victims of anti-Semitism, including Illinois students Daniel and Talia Raab; Los Angeles resident Matthew Haverim, who was attacked outside a sushi restaurant during the most recent conflict between Hamas and Israel; and Boston Rabbi Shlomo Noginski, who survived a stabbing attack outside a Jewish day school just two weeks ago.

“Last week, my body was injured, and I still need a lot of medication and treatment, but my soul and my spirit are strong,” said the rabbi. “We will defend ourselves, we will fight antisemitism, we will emerge with our heads held high … but our true answer is that we will love one another through expressions and acts of consideration and kindness.”

Noginski pledged to open a new Jewish education center where he will ordain eight new rabbis. “For every one of the eight stabs that the terrorist managed to penetrate into my body, we will ordain a new rabbi to serve hundreds … he wanted to kill one rabbi, we will make sure to [add] eight more.”

Julie Paris and her father Rodney Fink traveled from Pittsburgh to attend the rally. 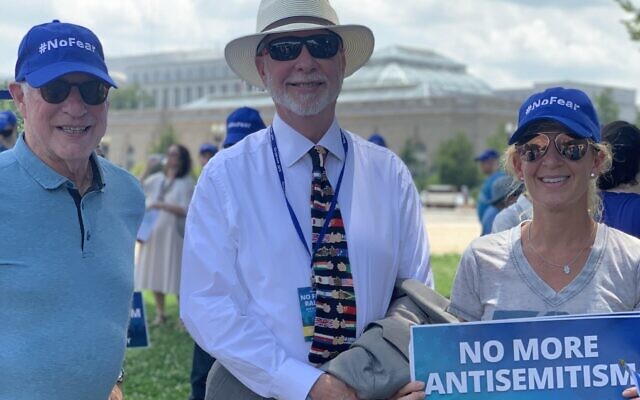 From left: Pittsburghers Rodney Fink, Rabbi Jeffrey Myers and Julie Paris at the ‘No Fear’ rally on July 11, 2021 (Photo courtesy of Julie Paris)

The speakers were inspiring, Paris said, and she was optimistic that the rally would be a “kick-off” for the wider Jewish community to “find ways to identify the problems and find effective solutions together….We each have to do our small part and collaborate together. We have to put our differences aside and realize [antisemitism] is a bigger problem. We can’t allow antisemitism to be normalized.”

“It was wonderful to see Rabbi Myers there,” she added. “He always makes Pittsburgh proud.”

Several attendees were wearing Stronger than Hate T-shirts, Paris said, even though few — if any — other Pittsburghers were in attendance.

“We are inspired to see this rally garner such support from and with the Jewish community,” said Laura Cherner, director of the Community Relations Council of the Jewish Federation of Greater Pittsburgh, who watched the rally as it streamed live online. “We held a rally against antisemitism in Pittsburgh a few weeks ago and are pleased to continue to see expressions of solidarity with the Jewish community across the country.”

Absent from the rally were some left-wing groups that were asked to join but opted out of attending because some of the sponsoring groups adhere to a definition of antisemitism that encompasses harsh criticism of Israel, including the movement to boycott, divest and sanction Israel. Groups like J Street and Americans for Peace Now oppose BDS, but object to defining it as antisemitic. PJC

JTA and Toby Tabachnick contributed to this report.