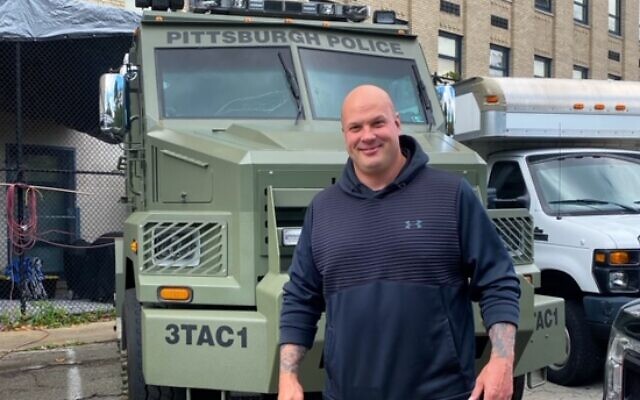 Tim Matson returned to active duty after being shot on Oct. 27. Photo by Anthony Seretti

Almost two years after being injured during the Oct. 27, 2018, shooting at the Tree of Life building, Pittsburgh Bureau of Police Officer Timothy Matson has returned to work.

Matson was shot multiple times by the perpetrator during the anti-Semitic attack against Congregation Dor Hadash, New Light Congregation and Tree of Life*Or L’Simcha at the Tree of Life building. Eleven worshipers were murdered that day, and two seriously injured.

Matson was one four officers wounded while rushing the building and required extensive rehabilitation before his return to work.

On his Facebook page, Tree of Life*Or L’Simcha Rabbi Jeffrey Myers called Matson one of his heroes, writing, “I’m so grateful for Tim’s bravery, and delighted that he has returned to duty. May God watch over him and protect him. ”

“Tim said from day one that he would be back,” Police Chief Scott Shubert said in a press release. “He’s worked extremely hard over the last two years to make this a reality and we couldn’t be prouder or more thankful to Tim and all who stood by his side during this incredible journey.”

Tree of Life published a post on its Facebook page, announcing Matson’s return and thanking him for his service.

“Officer Matson is a model of selflessness and dedication to others, and a great example of the public service police officers and other city employees provide to Pittsburgh residents every day,” Pittsburgh Mayor Bill Peduto said in a press release. Public Safety Director Wendell Hissrich called Matson’s return to modified duty, “A bright spot to emerge from a dark chapter in the city’s history.”

Matson, who has been a member of the SWAT team since 2016, is a 15-year veteran of the police force.

The Pittsburgh Jewish community will mark the two-year commemoration of the shooting with community service, Torah study and a livestreamed and pre-recorded public ceremony. PJC