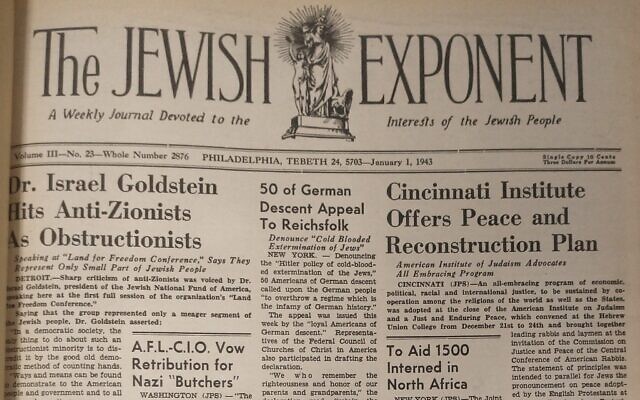 Mid-Atlantic Media, which is based near Baltimore, pledged to maintain local news operations for the Exponent, which is the second-oldest continuously published Jewish newspaper in the United States. Mid-Atlantic Media CEO and Publisher Craig Burke said the acquisition fits in well with the company’s strategic plans.

“The Jewish Exponent has always been one of the preeminent Jewish publications in the country,” he said. “Seven years ago, we considered it an honor and privilege to help provide custom media services to the Jewish Exponent. Now, the opportunity to acquire the Exponent and bring it into our corporate media portfolio is a true thrill.”

The Exponent was founded by 43 prominent Philadelphians and debuted on April 15, 1887, at 14 pages with sermon recaps, synagogue updates, society tidbits and foreign news. Over time, the paper grew in size, adding opinion columns, obituaries, debates about Zionism and extensive coverage of major world events.

When the paper floundered financially in the 1940s, real estate magnate Albert M. Greenfield bought it and turned it over in 1944 to the Allied Jewish Appeal — the precursor of the local Jewish Federation.

In 1962, The Philadelphia Inquirer touted the paper as “the largest Anglo-Jewish weekly in the United States.” It averaged around 40 pages per issue then and grew as large as 100 pages per issue in the late 1980s.

The Jewish Federation addressed the paper’s sale in a letter to the Jewish community.

“We are immensely proud to have been the stewards of our community’s news for nearly eight decades and are excited that such a powerhouse in the Jewish publishing business will now take over the reins,” the letter reads.

“Importantly, this change in ownership will also enable the Jewish Federation to have greater human and financial resources dedicated to serving the community. In the months and years to come, the Jewish Federation will continue to address the community’s most critical needs while also partnering with the many thriving Jewish agencies, schools and synagogues to ensure a vibrant, inclusive and welcoming Jewish community of Greater Philadelphia for generations to come.”

“It’s a business you (Mid-Atlantic Media) should be in, and we shouldn’t be in,” he said. “Organizations like ours have to focus on what we do best.”
Balaban noted that the trend has been away from Federations owning papers — most have already divested themselves.

For Philadelphia’s Jewish Federation, three factors came into play, Balaban said. Aside from the Jewish Federation not being a good fit in the publishing industry, the paper was operating at a loss, leaving less money available for the organization’s core purposes. And in today’s highly polarized world, it’s hard to please everyone, he said.

He said conservatives called the paper too liberal, while liberals complained the paper was too conservative. Some organizations thought they weren’t featured enough in the paper, while others opposed stories they thought weren’t favorable.

“Our steadfast commitment to engage, educate, entertain and connect Jews across the religious, political, demographic and geographic spectra of our community has never wavered,” Jewish Federation said in its statement. “However, the ever-changing landscape of print media can make owning a local Jewish newspaper challenging to maintain. In Mid-Atlantic Media, the paper will have proven experts in the field focusing on its growth, development and relevance in the marketplace.”

For those that receive the Jewish Exponent as a gift from Jewish Federation for a donation once made to the Jewish Community Fund, that will continue. Mid-Atlantic Media will reach out to subscribers occasionally to update contact information.

Mid-Atlantic Media first become associated with the Exponent in 2015 when it was hired to operate the paper’s editorial and production departments.
“Jewish publications build and strengthen Jewish community with their content, both in print and digitally,” Burke said. “We look forward to providing valuable content to Jewish readers in the Greater Philadelphia area and helping our advertisers grow their business.”

Andy Gotlieb is the editor of the Jewish Exponent, an affiliated publication, where this first appeared.