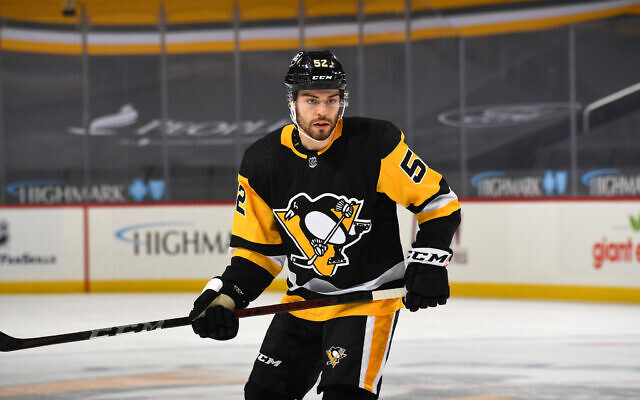 The Pittsburgh Penguins’ newly acquired defenseman Mark Friedman is unequivocal when asked how he feels about playing for the archrival of his former team, the Philadelphia Flyers.

Friedman, who is Jewish — a rarity in the world of professional hockey — has been in Pittsburgh for about a month, since the Penguins claimed him off waivers from the Flyers at the end of February. And he “loves it.”

“There is more of a homier feel than Philadelphia,” said Friedman, who has been on injured reserve since March 4, following a game against the Flyers. “It’s not as busy, not as noisy, nicer people. It’s not as dirty, especially in Cranberry where I live. It’s just a great neighborhood.”

Hextall “was the one that drafted me and gave me my first opportunity,” said Friedman. “I can’t thank him enough for giving me a fresh start — it’s definitely something I needed. I’ve got nothing but good things to say about him. He’s hard when he needs to be, strict when he needs to be, but he is very approachable as well. We have a good relationship and it’s just fitting that he’s the one who picked me up off waivers.”

Later in that game, Friedman was injured and was still on injured reserve as of press time. Last year, Friedman said, he had some “bad concussions” and is wary to return to the game too soon.

“You never want to mess with the brain,” he said.

Friedman sees his role in the Penguins as a “a reliable two-way defenseman more leaning toward my offense, with my ability to get up in the play. I’m not the biggest guy, but I love to get up and down the ice.”

He said he’s confident in his skating ability “and my puck-smarts and my hockey IQ,” and is undaunted by bigger guys.

Over the years, Friedman’s skating has gotten “dramatically better,” he said.

“My first couple years in the NHL, my skating ability kind of hurt me,” he said. “My gaps weren’t great. But now I’m using my skating ability and my speed to get me out of trouble and that’s where I think I can be relied on here, to make the first pass out of the zone on a break out.”

Friedman grew up in Toronto and attended Hebrew school until grade five, when hockey began to conflict. His Toronto high school was predominately Jewish, he said, and he remains close to several of his Jewish friends from those days.

He values his Jewish upbringing, he said.

“It’s nice being in a family that’s Jewish,” Friedman said. “It’s different from most of the hockey world. You don’t see too many Jews playing hockey, especially in the NHL. It’s definitely cool when guys ask about it.”

He enjoys celebrating the Jewish holidays with his friends and family back home, he said, and has a particular fondness for Jewish food.

“Anything my bubbe cooks,” he said. PJC