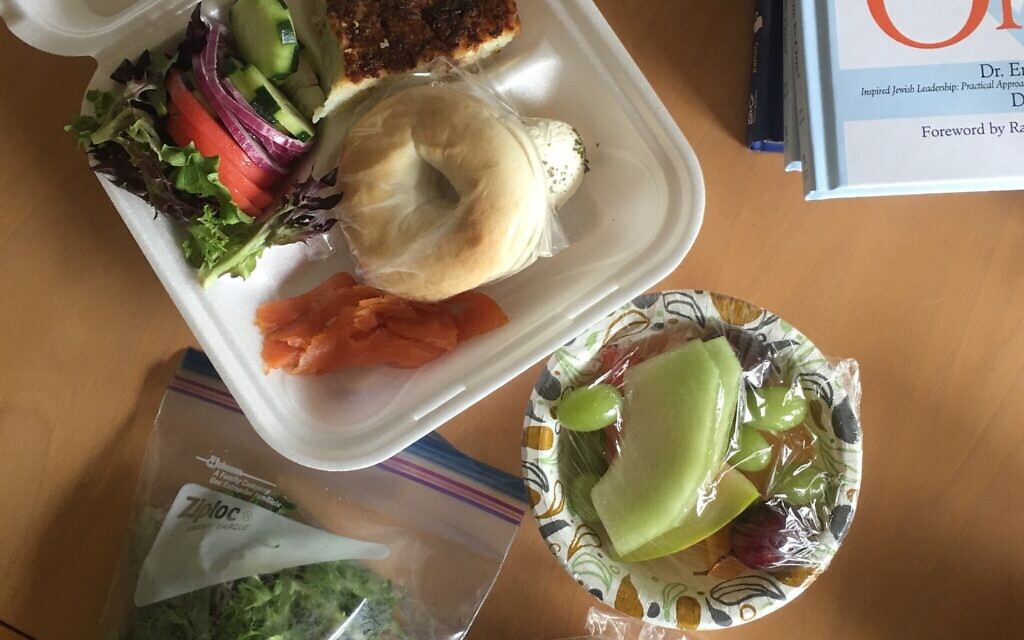 Nathan Jeffay misses the simple pleasure of kiddush, like those at Beth Shalom Congregation, before social distancing and individually wrapped lunches. Photo courtesy of Tammy Hepps

It’s more than a year since my last hit; since the glorious taste tickled my throat, leaving me more invigorated than anything else in the world.

My children are happy. It was a stinky antisocial habit, they say. I smell much better now. But I miss pickled herring.

The shops never stopped selling it, but it doesn’t taste right eaten outside its natural habitat: the communal kiddush, an institution that was halted abruptly when the pandemic struck.

I tried, right at the start of the crisis, tucking in at home, but it was a hollow experience, like eating birthday cake alone.

For me, herring is the taste of kiddush, best enjoyed surrounded by the clinking of whisky glasses, loud communal chatter and the shenanigans of (other people’s) kids trying to take all the cookies without anyone noticing.

I’ve missed kiddushes enormously. They epitomize a kind of social interaction we have all lacked during the pandemic. Many of us have done well at keeping talking to close family and friends. But the crisis has stripped away many of the encounters with those we know less well, or hardly know at all.

At kiddush, we share a greeting, a kvetch or a joke (ideally the same one told the previous week) with those we don’t see or speak to elsewhere. They are the sort of casual interactions that underpin our sense of community. They are the connections that make us more than a collection of friendship groups and help to meld us into an interconnected society.

Israel is a less cheery and less vibrant place with these dialed down. This is why for me the reinstitution of the kiddush — rumored to be happening in my community’s courtyard this weekend — is a bigger deal than the reopening of restaurants. At restaurant tables, family and close friends clink glasses; at kiddush gatherings we can encounter others and leave behind the insularity of lockdown.

An ode to happy herring experiences can seem out of place, or even trivial, in these times of very real crisis. Which is exactly why I offer it.

Israel’s turbo vaccination program will defend us against the virus. But for the nation to bounce back, and move on confidently and happily, we each need to start to make sense of the craziness we’ve lived for the last year.

The things you have found hard, or missed, may seem trifling, but identifying what they are, and giving a voice to them, is legitimate, and part of moving on. It’s part of recognizing just how unusual things have been. And it’s part of appreciating the new reality of reopening, green passes, and, yes, my herring habit. PJC