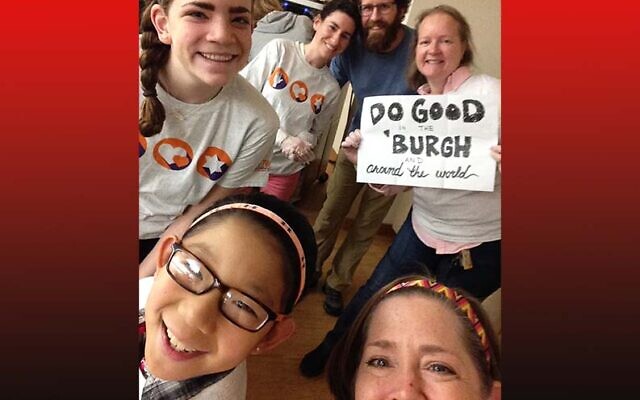 Pre-pandemic, Darcy Gordon (front) participated in Mitzvah Day with her daughters, Dora (left) and Rebecca and other volunteers. Photo by Darcy Gordon.

After Moses led the Jewish people out of Egypt, he was met by his father-in-law, Jethro, a non-Jewish Midianite priest who shepherded the prophet’s family through the desert to join them on their journey to Israel. During his time with Moses, Jethro offered advice on leadership and the delegation of authority.

Temple Sinai Rabbi Daniel Fellman points to this passage as an example for the engagement of non-Jews in synagogues and Jewish life.

“That’s the primary model actually,” Fellman said. “And the Torah portion that has Jethro’s name attached to it also has the Ten Commandments, a pretty significant portion. Jethro was honored as a model of a non-Jewish parent or partner who helps the Jewish community.”

Across Pittsburgh, non-Jews play significant roles in many liberal congregations, helping in religious schools, in choirs, during Mitzvah Days and in many other social justice and community programs.

Schneider, who isn’t Jewish, said she considered converting to Judaism, but after marrying her husband, Ron, she decided against it based on advice from Temple Emanuel’s then-senior rabbi.

“It was Rabbi [William] Sajowitz that sat me down and said, ‘Conversion is not just adding insights — you really are repudiating something,’” Schneider recalled. “That wasn’t for me.”

The rabbi’s words, she said, were a comfort to her and allowed her to talk with her husband about how their interfaith family would work.

Schneider’s decision to remain a practicing Christian, while still raising her children Jewish and finding space to volunteer at Temple Emanuel, hasn’t always been easy, she said. But she always feels the need to participate.

The South Hills resident has played piano during the High Holidays and sung during Shabbat services. She’s also drawn to Judaism’s mandate of tikkun olam, or repairing the world.

“I’ve been on [Temple Emanuel’s] social action committee for years and years,” she said. “One of the first things I did was a really cool project for Mitzvah Day with SHIM (South Hills Interfaith Movement). That’s how I got involved with SHIM. I ended up serving for a number of terms on the SHIM board and as the president of their board.”

Schneider also volunteers with Christ Methodist Church; she sings there and serves as a part-time staff member.

As part of her work with the secular Giving2Grow, Schneider finds ways to engage Temple Emanuel members. When she was collecting children’s books, for example, she reached out to the synagogue’s education director, Kate Louik, who gathered 375 books to donate to the organization. 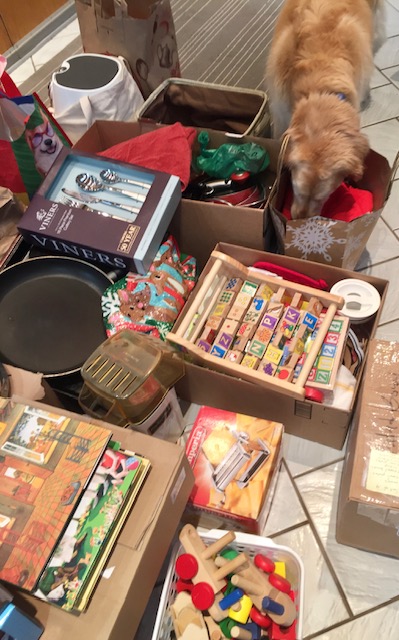 Deborah Schneider’s dog Jay-Dee checks out some of the kitchen equipment and children’s books and toys headed for clients of an agency in Uniontown. Photo provided by Deborah Schneider.

Like Schneider, Darcy Gordon didn’t grow up Jewish. In fact, her father was a Presbyterian minister. Gordon, a member of Temple Sinai, said that she grew up as an active member of her church, singing in the choir and serving as a deacon. When she and her husband married, however, they decided their children would be Jewish.

“When my husband said he wanted our children to be Jewish, I said, ‘That’s great, but we have to be Jewish and they have to BE involved with a congregation,’” Gordon said.

Temple Sinai welcomed her and encouraged her participation, Gordon said. Several years ago, she served on the search committee to help find a new assistant rabbi and is a part of the Women of Temple Sinai. She volunteers during Purim, performs in the congregation’s annual purimshpiel and recently joined the committee that helps with shivas.

Gordon works at Mainstay Life Services, and this year she helped the organization participate in Jewish Disability Inclusion and Awareness Month.

She remembered a time when a story appeared in the Pittsburgh Jewish Chronicle that claimed Judaism was dying because of intermarriage.

“That really hit me the wrong way considering I’ve put so much into raising children who really, really identify as Jewish and who are Jewish,” Gordon said. “They appreciate other faiths and learn about other faiths, but they love being Jewish.”
Non-Jewish members’ participation isn’t limited to Reform temples.

Dawn Lebovitz serves as a member of the board of trustees at Conservative Beth El Congregation of the South Hills. As part of her work with the congregation, she volunteers with Oy Joy Labs, a series of multi-sensory events for enrichment of the Jewish holidays and life cycle events, and B.R.I.D.G.E.S — Building Relationships in Devotion to God for Every Season, a mentor program welcoming new members. 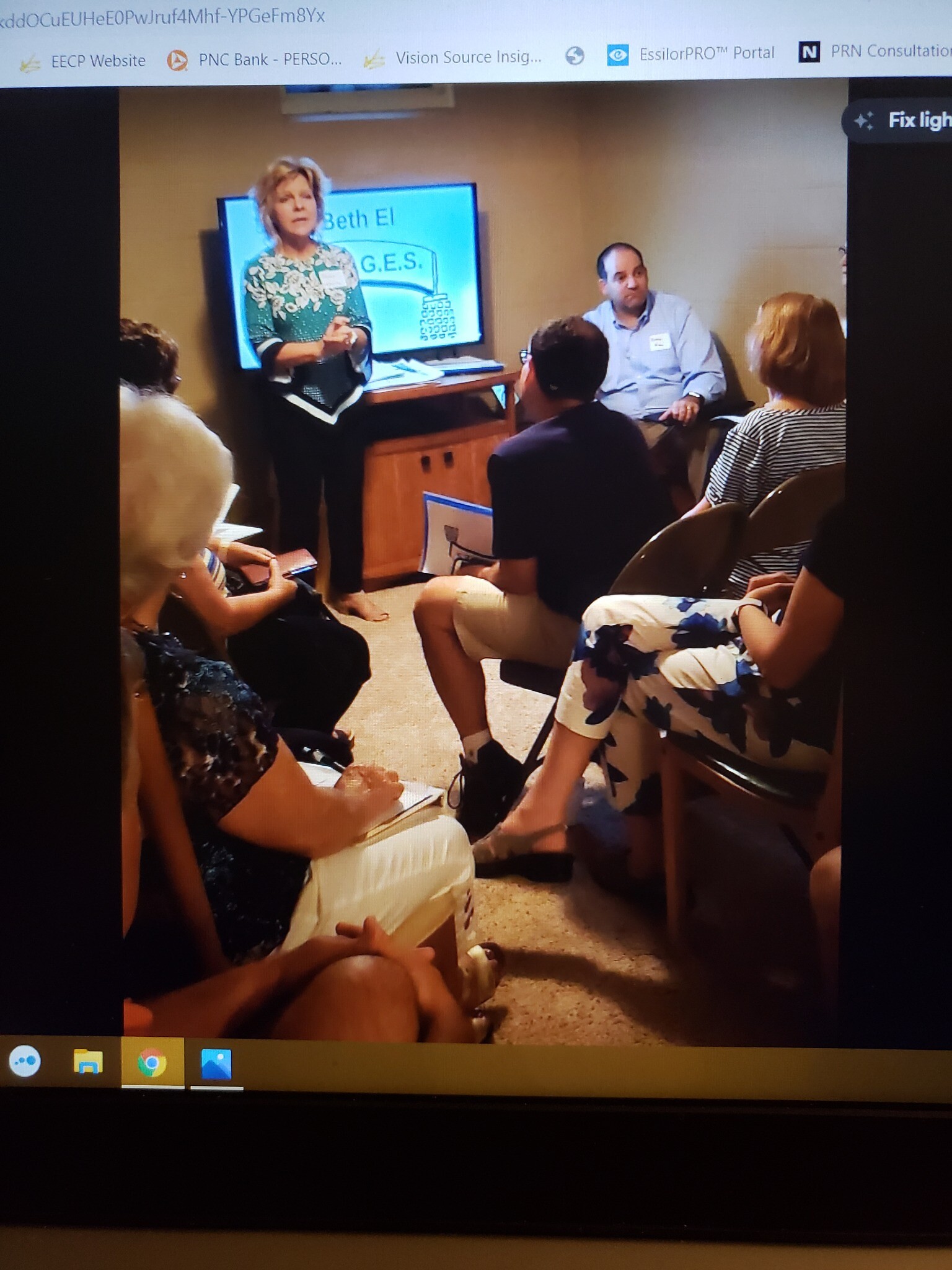 Lebovitz is also a member of the congregation’s Community Development Task Force, formerly known as the Interfaith Committee. She attends Shabbat services and participates in numerous other events and activities.

Lebovitz said she became involved at Beth El 33 years ago when her sons were young and attending Beth El’s nursery and religious schools.

“I have always served in my devotion to God on behalf of my marriage to my husband, Lowell, and my sons, Evan and Adam, for the good of the Beth El community through benevolence and charity,” she wrote in an email to the Chronicle.

While she hasn’t converted, Lebovitz said that she considers daily prayer essential and is drawn to God through the prayers and rituals offered in Judaism.

Lebovitz believes that religions can teach lessons to those who aren’t members of the faith.

“There is a world of possibilities with a shared commitment through a linked chain of strong hearts with the common hands of giving,” she said.

“At Temple Emanuel, we value and appreciate the contributions of all of our members, whether Jewish or not, as they volunteer in areas that align with their passions and interests,” she said.

“There’s something for everybody,” she said. “It’s in the context of doing God’s work — it’s everybody’s interpretation of that.” PJC