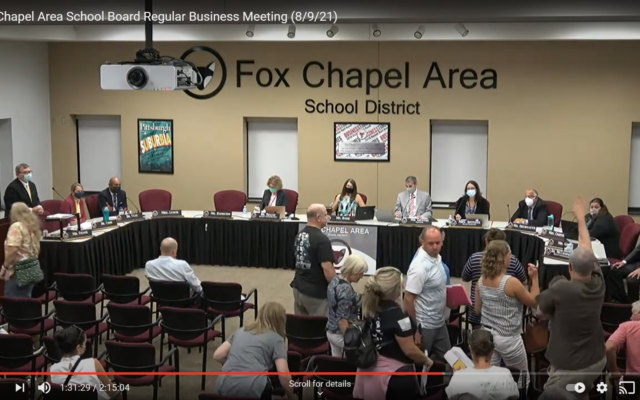 An unidentified male gave a Nazi salute during the Aug. 9 Fox Chapel Area School Board meeting. Screenshot by David Rullo.

A Nazi salute, a false comparison to 1938 Germany and a reference to Josef Mengele — the Nazi physician who performed deadly experiments on concentration camp prisoners — were bandied at two successive Fox Chapel Area school board meetings this month where mask mandates were discussed.

At the “agenda study session” on Aug. 2, community member Amy Horn made a series of false claims to the school board, including that the Centers for Disease Control and Prevention is not a government agency and that masks don’t work to prevent the spread of COVID-19.

When she concluded her remarks, she said, “We have the right to choose in this country, unless we’ve changed. Unless this is Nazi Germany in 1938.”

Horn’s comments were followed by cheers and claps by some in attendance. 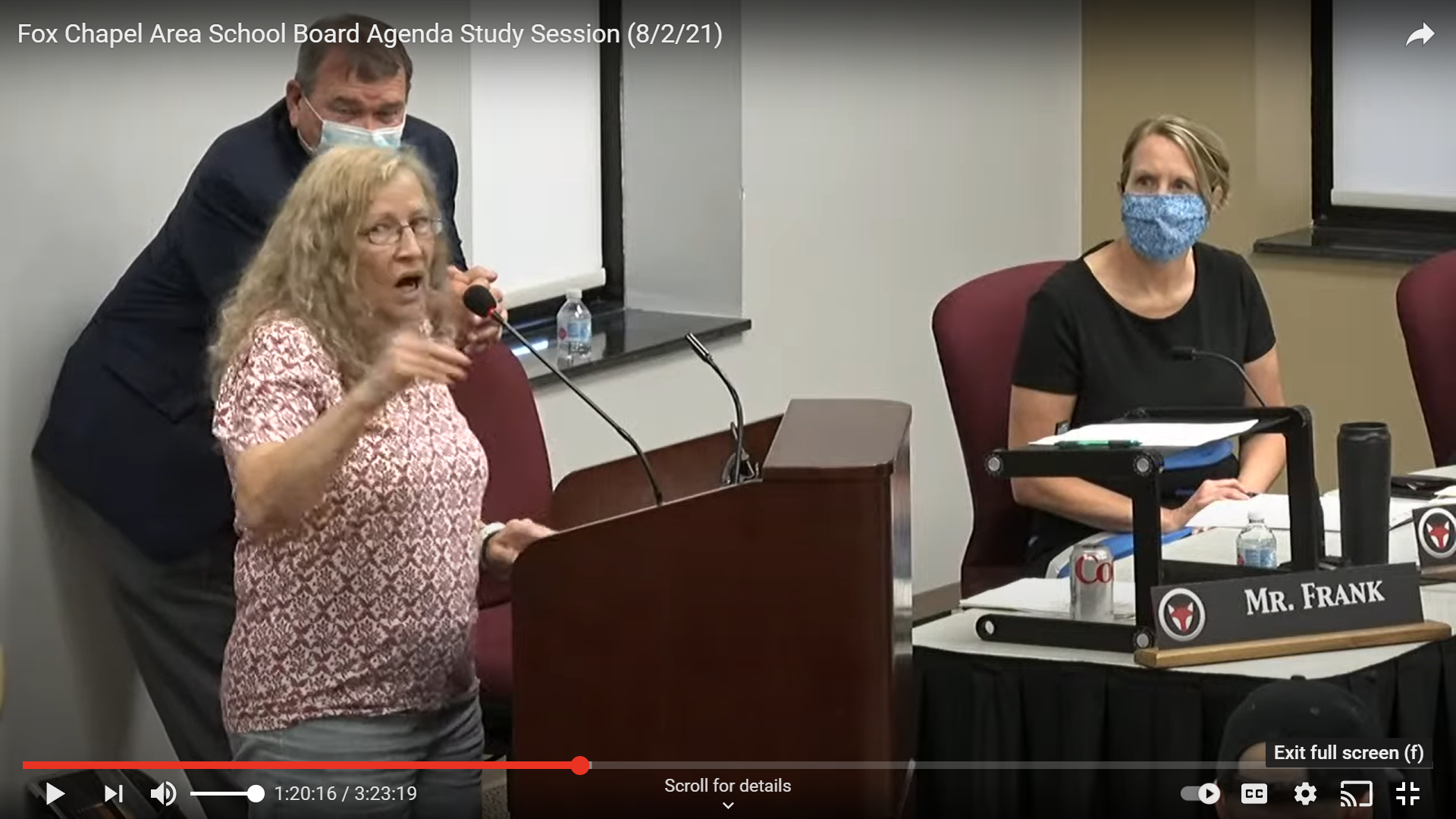 During the Aug. 2 Fox Chapel Area School Board meeting, Amy Horn made comparisons between wearing masks and 1938 Germany. Screenshot by David Rullo.

At an Aug. 9 regular business meeting, Greg Dolan, who is running for a position on the school board, led a group of supporters in boos as each board member voted to require masks be worn by students in all grade levels.

Following the vote, Dolan stood and addressed the board — against the instruction of board president Marybeth Dadd. As Dadd banged her gavel and called for order, Dolan turned to the crowd, saying, “This isn’t America. Let’s go!”

As some of the crowd began to leave, an unidentified man stood and raised the Nazi salute. A person in the crowd shouted at the board, “You made Dr. Mengele proud!” It is unclear from the video recording of the meeting whether that statement was made by the same individual who saluted.

Dolan declined to speak with the Chronicle, and instead pointed to comments on his campaign’s Facebook page. But he stated in a Facebook message to the Chronicle that he disavowed the actions of this person or persons, and was not present when it happened.

“My clear and unequivocal condemnation of the actions of a stranger after I left the meeting the other night speaks for itself,” he wrote.

However, the video of the meeting shows the “stranger” leaving along with Dolan and his supporters. There was not a specific “clear and unequivocal condemnation” of the Nazi salute or mention of Mengele written by Dolan on the campaign’s Facebook page. Instead, he reposted comments by Dadd and wrote: “I agree these insults are out of line and they should stop. Our community needs to come together.”

“During the last two School Board meetings I have listened to community members make statements/comparisons to and use Nazi symbols in reference to decisions the Board was making,” Dadd wrote. “These actions and statements are completely unacceptable and anti-Semitic. The atrocities that were committed by the Nazis have no place in the discussion of this School Board. The Board is happy to hear the viewpoints of the community, but they must be made in a way that doesn’t insult large portions of our community and members of our Board who are Jewish. I can handle criticism, that’s part of the job, but bringing in comparisons to Nazi actions is beyond what is acceptable.”

She concluded by saying that she was only speaking for herself but was certain others agreed with her.

According to a Jewish parent who asked not to be identified over concern for the safety of her family, the district first issued a statement that did not condemn the Nazi references at the meetings.

“I emailed them saying I saw your statement; it didn’t condemn anything. We need to call it out in order to ensure people are aware of what’s not appropriate,” the parent told the Chronicle. After posting another message on its website on Aug. 10, calling for all members of its school community to be “respectful in their interactions with each other and during district events,” the district sent an email to parents on Aug. 11:

“The Fox Chapel Area School District is deeply troubled that during our recent School Board meeting, some members of the public that were in attendance compared the decisions that the district and School Board were making regarding student health and safety planning to the atrocities of the Holocaust, including a visible display of a Nazi salute directed at the Board,” the email said. “Anti-Semitic and all hateful speech and actions have no place in our district, and the Fox Chapel Area School District denounces hateful comments, signs, and symbols in all forms.” (This sentence was in bold type in the email.)

Carrie Conti attended the meeting on Aug. 9 and was seated several rows behind the man who raised his arm in a Nazi salute. She said none of the parents who regularly attend board meetings know him.

“That’s what’s driving me crazy,” said Conti, who has four children enrolled in the school district. “We’re trying to ID him. We’re all like ‘You look so familiar,’ but none of us are able to put a name to him.”

Like much of the country, many community members have been revved up by discussions about a possible mask mandate in the schools, she added.

“This has been a high-tension thing,” Conti said. “Our community has a lot of Facebook groups and those groups have been incredibly hot lately. It was only a matter of time before it spilled into our school board meetings.”

Debbie Leuchter Stueber remains active in the district even though her children have graduated. Her parents are Holocaust survivors, and each year she speaks at Dorseyville Middle School during its annual Holocaust education assembly.

She said she was surprised that there were references to Nazis at the meetings.

“I don’t know how people go from requiring masks to be worn to equating it to the Holocaust, although we have people in the legislature that have done that, like Marjorie Taylor Greene,” Stueber said.

Greene, a Republican representative of Georgia, has made repeated statements equating House Speaker Nancy Pelosi’s requirements that House members wear masks to the Nazis. She also compared wearing masks to the yellow stars Jews were forced to wear under Nazi occupation.

The repeated instances of false equivalencies being made between the Holocaust and wearing masks or getting vaccinated show the need for education, said Laura Cherner, director of the Community Relations Council of the Jewish Federation of Greater Pittsburgh.

“It’s a form of Holocaust denial,” she said. “If you truly understand the gravity of the Holocaust and its lasting impact on the Jewish community and our families, you would not so flippantly use Nazi symbols or Heil Hitler. It’s deeply offensive.”

Analogizing to the Holocaust “normalizes it,” Cherner added. “It takes away from the gravity and horrors of the Holocaust.”

“When you really boil this down,” said Lauren Apter Bairnsfather, the director of the Holocaust Center of Pittsburgh, “this is the opposite of the Holocaust. We’re talking about a public health crisis and trying to address it in a way that works.

“The Holocaust is killing people,” she said. “This is saving people.” PJC