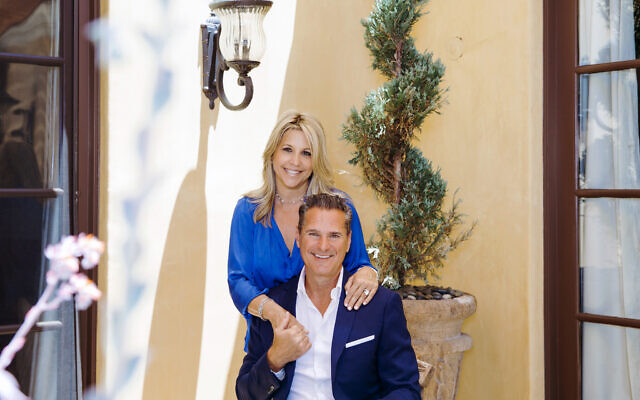 Jodi and Greg Perlman (Photo provided by The Change Reaction)

A Jewish developer from Los Angeles and his wife are lending a hand to Hebrew Free Loan Association borrowers in Pittsburgh.

Philanthropists Greg and Jodi Perlman, who recently launched the nonprofit The Change Reaction to stimulate giving among those with financial means, are paying off more than $14,000 in loans for eight lucky borrowers, according to Aviva Lubowsky, director of client and community relations for HFLA.

“This is an amazing gesture, and we are about to contact our borrowers who were selected to tell them that they don’t need to make any more loan payments,” Lubowsky said. “They hope the borrowers whose loans they pay off will have a little extra joy this holiday season.”

Perlman wants “to lead the way for this kind of giving nationally,” he said. He came up with the idea for the HFLA funding after meeting with the Jewish Free Loan Association of Los Angeles.

“I said, ‘You know what? I’m going to pay off all these loans,’” Perlman said. “I’m all about empowering people.”

“We’re always trying to show that, ‘Look, the Jews do good,’” he added. “We’ve been doing this for 5,000 years, helping out not just Jews but everybody.”

Perlman is founder and CEO of GHC Housing Partners, which owns and operates 30,000 housing units, including many coming under Section 8 and affordable housing; 250 partnerships; and more than $2.5 billion worth of real estate nationwide, according to GHC’s website.

Perlman also has real estate ties to Pittsburgh. In addition to operating a 100-unit building in Baldwin, he once boasted about 2,000 housing units within 50 miles of downtown, he said.

The stories of the people who received loan forgiveness from the Perlmans speak for themselves.

Sharon Serbin is a longtime Pittsburgher and Jewish educator whose furnace in her Highland Park home suddenly stopped working during a January 2019 cold snap.

“I could only scrape up a small part of the cost,” Serbin said. “I was not only freezing in my home, I was also panicking. I reached out to Hebrew Free Loan Association for a loan for the remaining $5,000. They were an answer to my prayers. Being approved for an interest-free loan allowed me to breathe again.”

Serbin, who is legally deaf, struggled making payments during the COVID-19 pandemic after losing work but didn’t miss a payment, and only owed about $600 on the original loan. Lubowsky used a text-chat to inform her of the Perlmans’ generosity.

“Completely shocked, I immediately replied something to the effect of, ‘No, I can do this. Give it to someone who is struggling more than I am,’” Serbin said. “Every single night, before falling asleep, I calculate how much income I earned that day, and which bills I would put it toward.

Anxiety and worries over how to make ends meet during this crazy year has filled many nights with heartburn and nightmares. This loan forgiveness of the remaining $609 of my loan still makes me cry even days after finding out. I never expected this.”

But, as is the case with HFLA, not every borrower needs to be Jewish to be the recipient of the Perlmans’ good will. Though Perlman is Jewish, he sees it as a mission to help people regardless of their religious affiliation.

Leah Wheeler is a born-again Christian who works as an administrator at the front desk at Hillel Academy in Squirrel Hill. She said she used a $5,000 HFLA loan to buy a used car to get to and from work.

“I hurt myself at work at my job. Because of the injury, I wasn’t getting paid and subsequently had to give up the job. This affected everything, including repayment of the loan,” said Wheeler, whom Lubowsky later helped find an administrative job. “I recently called HFLA and asked them what the remainder of my loan was. I was told that it was $700 as of November. I began to plan on how I could possibly double up on the last few payments so that I could go into 2021 with a clean slate.

“When Aviva and I began to speak on Zoom about the loan, I was absolutely dumbfounded when she told me that a couple wanted to perform a mitzvah and pay off the remainder of my loan — I couldn’t speak, couldn’t respond and was totally overwhelmed by the entire thing. I’ve been pinching myself ever since,” she added.

Perlman launched the nonprofit group The Change Reaction in L.A. in 2019. Since then, it has provided more than 2,000 grants through 35 grassroots organizations and hospitals, creating a movement they hope to replicate in communities around the country. PJC