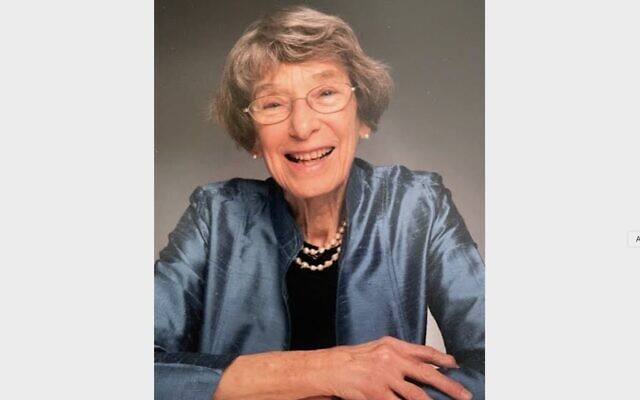 Joan Brest Friedberg, a book aficionado quick to relate to individuals and families whom society sometimes marginalized, died on March 13. She was 94.

Friedberg received her Ph.D. in English from the University of Pittsburgh in 1972 and taught composition there as adjunct faculty. She will be most warmly remembered, however, for Beginning with Books, the literacy program she founded in 1984 with friend Elizabeth Segel that focused on providing quality books to low-income families and promoted reading aloud to babies and children.

“Joan was a very thoughtful, kind and generous person, who cared very much about her family and her community,” said Susan Brownlee, retired director of The Grable Foundation, which helped financially support Beginning with Books. “I think it was their compassion and generosity that made the program work.”

Born in Boston, Friedberg grew up on a chicken farm in rural Massachusetts, which her parents helped buy after the stock market crashed in 1929 to weather the Great Depression. There, she attended a two-room school and developed an appreciation for living a full life despite obstacles, said her youngest child, Susan Friedberg Kalson. Years later, Friedberg’s father died unexpectedly during her senior year at Bryn Mawr College.

Friedberg met her husband of 55 years, the late Simeon A. Friedberg, at a family birthday party after moving to New York City following her graduation from Bryn Mawr, Kalson said.

“He saw my mother … and he just fell head over heels in love with her,” she said.

The two corresponded daily by mail — Friedberg in New York working for “Publisher’s Weekly,” Simeon Friedberg studying in graduate school in his native Pittsburgh. They met in June 1949 and got married in September 1950, eventually having three children and settling in Pittsburgh.

“They barely knew each other,” Kalson said, “but they had this literary romance, this letter writing. And they had a wonderful marriage.”

Amy Kellman served as the head of children’s and young adult services for Carnegie Library of Pittsburgh for years. At one point, she was based in the Homewood branch of the library system, out of which Beginning with Books was operating.

“Joan had very definite ideas about books, and it was always a pleasure to work with her,” Kellman said. “I think what she did for children and books was amazing. It contributed a lot to making Pittsburgh a better city.”

David Bartholomae, a professor and Charles Crow chair, emeritus in the University of Pittsburgh’s English department, met Friedberg when he arrived on campus in 1975. In addition to teaching, Friedberg was active in the school’s children’s literature program.

“Like most English departments, Pitt’s relied — as it continues to rely — on a talented and inventive and dedicated adjunct staff to teach required, lower-division writing courses,” Bartholomae said. “My job was to help ‘direct’ this program, a program whose teachers were far more experienced than I was. Joan was one of the leaders among this group. I learned much from her, and I remain grateful to this day for the kindness and generosity she showed to a new colleague.”

“She was a great colleague and teacher,” he added, “stern and demanding but also generous and professional.”

Friedberg also taught younger children in the 1980s at The Carriage House in Squirrel Hill.

Others from Pitt remembered Friedberg’s legacy by raving about Beginning with Books.

“Beginning with Books was an innovative program for promoting literacy to young children in our city, which began by giving out boxes of free books to families at well baby clinics in low-income communities and which later had its own story-mobile,” said Courtney Weikle-Mills, who arrived at Pitt to teach after Friedberg had left. “While the program is no longer in existence, at least one of its alums has gone on to a major career in children’s media; Chris Loggins, the supervising producer for ‘Daniel Tiger’s Neighborhood,’ got his start with Beginning with Books, driving the story-mobile.”

“They touched thousands of children,” Kalson said. “They went into really distressed communities and brought books to providers, and taught parents how to read to their children.”

Above all, Friedberg was compassionate. Kalson recalled a family trip to New York City, where, after surfacing from the Holland Tunnel, the family’s car was approached by a homeless man looking to clean windshields for change.

“That poor man,” Kalson remembers her mother saying. “He was once somebody’s baby, too.”

“It was never about her, it was always about the work,” Kalson added. “She was a wonderful person — and I miss her so much.” PJC