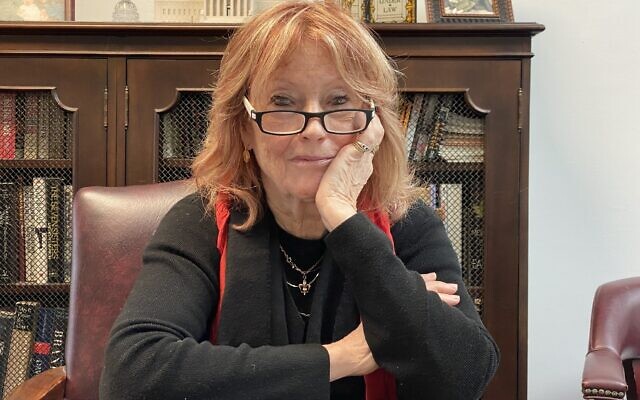 A longtime professor at Point Park University has sued the institution claiming employment discrimination based on her Jewish and Israeli ancestry, and alleging that there has been a concerted effort led by anti-Zionist faculty and students to create a hostile work environment.

Channa Newman, a Holocaust survivor with U.S., Israeli and Czech citizenship, has been employed by Point Park since 1964. She is currently the chair of the department of humanities and social sciences and is a professor of French and cultural studies.

In her 18-count complaint filed in the Court of Common Pleas of Allegheny County, Newman alleges that Professor Robert Ross, an outspoken critic of Israel, used his position at Point Park to promote “highly anti-Zionist views and activities” and to “foster the Boycott, Divestment and Sanctions (BDS) movement against Israel.” She says that Ross and others sought to have her removed from her position because she did not acquiesce to their one-sided presentation of the conflict.

Newman claims in her complaint that, with the support of Point Park, Ross along with Professor J. Dwight Hines, have “advanced militant and hateful views against Israel and in favor of BDS that are anti-Semitic and lead to the creation of a hostile work environment.”

The anti-Zionists on campus tried to remove Newman from her position at Point Park through the filing of a Title IX complaint against her, in which a student claimed that Newman made an insensitive comment about the #MeToo movement, Newman alleges.

Newman was exonerated from those charges, but not before she had endured significant maltreatment from the university, including having her classes cancelled mid-semester, being prohibited from campus and being denied access to her email, she claims.

This may be the first time that anti-Israel activists have used Title IX — a federal law that protects those on campus from sexual harassment — as a pretext to have a faculty member removed, according to Newman’s attorney, James Lieber of Lieber Hammer Huber & Paul.

“It is a very heavy charge in academia,” explained Lieber. “Title IX is very important to stop sexual misconduct and sexual harassment on campus. This is the way, if you really want to go after somebody who has tenure, you can do that. People involved with BDS, they have bullied people on other campuses, they have boycotted them in various ways. But this is the first time that Title IX has shown up (as a BDS tool) anywhere in the United States.

“This is not a real Title IX charge, it has nothing to do with sexual harassment or anything like that,” Lieber added, noting that the student filed the claim against Newman only after consulting with Ross and Hines.

“Then she filed a formal charge and the university took it, and without notice, removed Channa from her classes and — this was really part of the very serious emotional damage I would say — they announced it to the students by email before they even told Channa. So she came to school and the students were telling her about this and she had no advanced notice.”

Newman contends that she has been targeted by Ross, Hines and their student followers because she has put up some resistance to the anti-Israel rhetoric and activities they promote.

“It was because I opposed the BDS thrust on campus,” she said. “I wasn’t trying to silence the pro-Palestinian impetus there, but I was trying to bring a two-sided perspective. This was too one-sided, and very offensive to me, obviously. One of my countries was being attacked. I just wanted transparency.”

Ross is an associate professor and coordinator of Point Park’s Social Justice Studies Program. He is a prolific writer on the Israel-Palestinian conflict. His articles include: “No Space for Apartheid: Toward an Academic Boycott of Israel Among Geographers” (2016, The Geographical Review), “One Year Later, Gaza Is Still in Crisis” (2015, Mondoweiss) and “How The New York Times Erases Israel’s Crimes” (2012, The Electronic Intifada). He leads Palestinian advocacy efforts on behalf of the Presbyterian Church’s Israel/Palestine Mission Network, and is member of the Organizing Collective of the U.S. Campaign for an Academic and Cultural Boycott of Israel.

Ross also sits on the board of trustees for Friends of Sabeel North America, an organization that appears on an Anti-Defamation League list of the top 10 anti-Israel groups in America.

Ross uses “teaching, speaking, social media, writing and taking PPU students on trips including with substantial university support financially and/or with scheduling” to promote a bias against Israel, and is supported in those endeavors by Hines, according to Newman’s complaint.

The complaint further states that in or around 2015, Ross tried to introduce a course titled “Israel: A Settler State” for all first-year Point Park students, although the class never came to fruition.

When Newman asked Ross if he would include views that were more balanced, either through herself or others, he declined, according to her complaint.

Ross maintains that social justice demands standing up for all those who are victimized, including students.

“This lawsuit attempts to use my work in the movement for Palestinian human rights as a basis to attack my support for students who felt victimized by a professor last academic year,” he said in an email to the Chronicle. “Like my solidarity with the Palestinian people, my commitment to ensuring that students have access to education in an environment free of traumatizing harassment is rooted in the belief that all people — regardless of religion, race, ethnicity, gender, class, age, ability or orientation — should be treated equitably. I stand in solidarity with all struggles for equity and liberation, including the Palestinian freedom struggle, the struggle to combat anti-Semitism and the #MeToo movement. It is necessary to support these movements if we are to fully achieve social justice in our world today.”

After the Title IX complaint was filed against Newman in Oct. 2018, Lieber said, a search ensued on social media in an effort to find any additional information that could be used against Newman.

“One of the worst things that can happen at a university is when students become mobilized or weaponized,” he said. “When Channa was off the campus and banned from her email, there was a student chat room that was set up with ex-students. One was Dr. Ross’s principal supporter on campus, and what they were trying to do was to get ‘anything’ on Channa Newman.”

Newman was informed about this chat room by another student.

“They were going beyond this Title IX claim,” Newman said. “And I wasn’t even sure how they got news of that because it’s supposed to be confidential. They wanted to go beyond that to anything, all my teaching. They said the school was looking into everything about me.”

Point Park denies all allegations of wrongdoing contained in the complaint, “and will vigorously defend itself in the lawsuit,” said Lou Corsaro, Point Park’s managing director of marketing and public relations, in a prepared statement. “Point Park is an inclusive community free of discrimination. As a matter of policy, the university welcomes and supports all faculty members regardless of their race, gender, religious affiliation, sexual orientation, gender identity, ethnicity, physical ability and political affiliation. Point Park embraces and actively pursues a policy of inclusiveness that reflects the diversity of the community it serves.”

Although Newman was cleared of the Title IX charges, the environment at Point Park remains hostile against her, she said.

“It was fortunate for me that I was vindicated, I was exonerated,” she said. “But it hasn’t really stopped. It would have been difficult to overcome what they did to me with this Title IX if I were treated fairly thereafter. But it just sort of continues. I can’t even recover from that. It was just horrific.”

When she returned to Point Park, she received a notice from the Title IX office that she was being investigated again, according to her complaint.

“She spoke to the Title IX coordinator, and there were students involved but they were not named,” said Lieber. “They didn’t tell her what the charges were, and we don’t know who the students are.”

Newman feels that she must remain “on guard” and she continues to be “shunned,” she said. “My reputation is really damaged. It hurts.”

Newman filed her lawsuit for the sake of “education and deterrence,” explained her attorney. “It’s important to stand up, and Channa has done that.” pjc

Toby Tabachnick can be reached at
ttabachnick@pittsburghjewishchronicle.org.