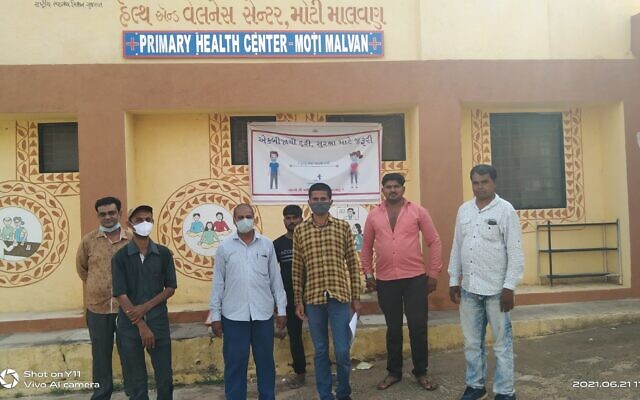 In 2005, an aspiring, Pittsburgh-bred student photographer and filmmaker traveled to northwestern India.

Fifteen years later, as COVID-19 widowed and orphaned scores of Indians, that same man decided to “repair the world” and do something about it.

Alex Goldblum was studying anthropology at Temple University when he trekked to the city of Dhrangadhra, India in the country’s Gujarat region, under the guidance of his professor, Jayasinhji Jhala, a native of Gujarat. Goldblum shot a documentary about members of the “untouchable” caste who were working as snake charmers, a film later picked up for distribution by Documentary Educational Resources.

He traveled through villages, interacted with families and, in short order, fell in love with the place.

“I met people who lived on a dollar a day — it’s a humbling experience,” said Goldblum, who is Jewish, a video engineer for a Cranberry firm and now lives in Squirrel Hill. “The other thing that draws me to India? Other than China, it’s the most foreign place I’ve been.”

He returned to Dhrangadhra in 2018, after keeping in contact with some of the people he had met there. By 2020, though, it was clear the region was in disarray.

“I saw in the national news that the COVID virus was rampant in India – and people were having a hard time,” he said.

So, he started a GoFundMe page to help with crowdfunding a cure.

That money bought much-needed medical supplies like oxygen meters for fingertips and touchless thermometers, Goldblum said. It bought some bigger-ticket items, like oxygen tanks and oxygen concentrator equipment, as well as food relief – bundles of flour, beans and spices – for the food-insecure in the Indian city.

“Dhrangadhra is an underserved area where money from New Delhi doesn’t reach,” Goldblum said. “It needs extra help. And that’s where we came in.”

Professor Jhala, who has become a mentor to Goldblum, had nothing but great things to say about his former anthropology student.

“What’s important about this man is his spirit,” Jhala told the Chronicle. “I think his Jewish heritage … may be the background for his philanthropy, his activism. But he found reciprocity in the people of Gujarat.”

“It’s about tzedakah and tikkun olam,” he said. “I’m motivated to do these acts of kindness because of my Jewish upbringing – to care for others, especially the less fortunate.”

Since the crowdfunding stopped recently, Goldblum has turned to other projects. An author of several photo-books, he currently is working on a documentary he shot in Israel titled “The Thin Green Line,” which addresses life in Israel and the West Bank. PJC